An Open Letter to my Cat’s Former Owner 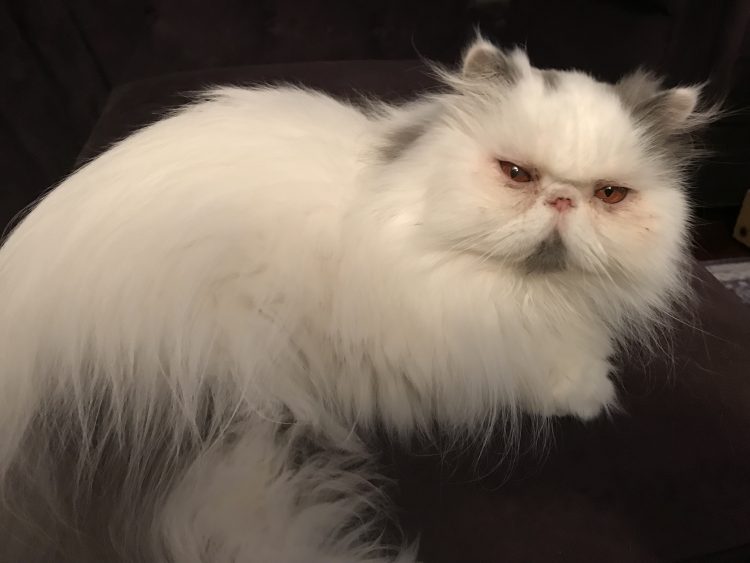 Today, we celebrate National Cat Day. It’s a day to encourage pet adoption and flood social media with cat photos. Or, as we call it in my house – Tuesday.

So on this National Cat Day I would like to send a message to the people without whom I would not have the best cats in the world: whoever turned them over to the rescue society.

I wanted to write to you personally and thank you for my wonderful cats. But I don’t know who you are so I’m writing this instead. When I first saw the photo of Poof on the rescue society’s Facebook page, I instantly fell in love. He was so handsome with his gorgeous copper eyes and his cute little hipster goatee, I couldn’t stand it. But I already had a cat and a husband who kept me on a strict one cat limit. Until a couple of months later when my husband of 10 years walked out on me. After the shock wore off, I remembered Poof and contacted the rescue people to see if he was still available. Fortunately for me, he still was and I went to pick him up the next Saturday.

You can imagine my shock when I picked him up and instead found this skinny, hairless creature. Apparently, his fur became so knotted he developed sores on his skin (which became infected) and they had to shave it all off. He had ulcers in both eyes, a respiratory infection, and only weighed five pounds. He was so traumatized that he didn’t want to come out of his little hidey house. The rescue people let me take it with him and for the first few weeks, that’s where I found him every day.

Thankfully, after a few months and a few hundred dollars worth of vet bills, he was restored to his handsome self. And he is just the best kitty ever. Honestly, I don’t get it. How in the world could you have ever parted with this sweet boy? What was it? Too many head butts and sandpaper kisses? To much adoration? Did his tiny little body take up too much space sleeping at the foot of your bed? The first winter I had him, I couldn’t sit down without him climbing in my lap. I think he was cold since he was missing his fur. Boy, it was SO ANNOYING having him curl up in my lap and purr while I watched TV every night.

Now, his brother I can understand. That cat is a neurotic mess. At least you had the decency to keep them together. The rescue people wouldn’t separate them, so they languished in the shelter for weeks until I came along and agreed to take them both. I did not want THIS cat. We got off to a rocky start. He literally bit me in the face once. But now, he’s my little buddy. He escorts me everywhere I go. When I’m sitting at my desk he comes over and taps me with his little paw and looks up to give me a silent meow. When I sit down he has to be rightupnexttome all the time. He just purrs and purrs and looks at me like he loves me more than anything in the whole world. But he’s terrified of everyone else. He got so scared when I had contractors in that he LITERALLY climbed up the chimney. Do you know how hard it is to get soot off of a cat? I don’t know what happened to him, but he cringes every time I try to pet him. I guess we’ve bonded because we both know what it’s like to be abandoned by the person they love most in the world.

I’d really love to know why you dumped 2 cats that you owned for 7 years into a shelter. They told me you said you were “too busy.” THEY’RE CATS! How the hell much time did they possibly take up? Sure, I spend a few minutes every day combing their long fur. And I have to clean out the litter box twice a day. That and dumping some food in a dish and making sure they have clean water. That’s it. That’s all I have to do to keep them happy and healthy. They spend about 18 hours a day sleeping. They quietly hang out with me when I’m working on the computer or watching TV.

The only one who is not happy with this arrangement is Marco, my original cat. He was NOT pleased when I brought these interlopers into his home and I suspect that he would gladly let you come and take them back. But I would never allow it. We’re all one big (mostly) happy family now.

I don’t know how you carry on every day not knowing what happened to them. Last summer, my stupid movers left the door open and Poof got out. He was gone for 2 days. I cried myself to sleep each night. It broke my heart to think of him out there scared, alone and hungry. I couldn’t bear the thought of never seeing him again. Of wondering what had happened to him and never knowing. It was hell. Fortunately for me, my neighbors all mobilized to help me and we found him 2 houses away. I cried like a baby during our reunion. It was like a scene in a Disney movie!

So thank you very much for giving me the best pets in the whole entire world. Your loss has most definitely been my gain. And as long as I’m alive, these guys will never be cold or hungry or unloved again. Just do me a favor: don’t adopt any more pets. It’s a lifetime commitment, not something you shirk off just because you get busy.