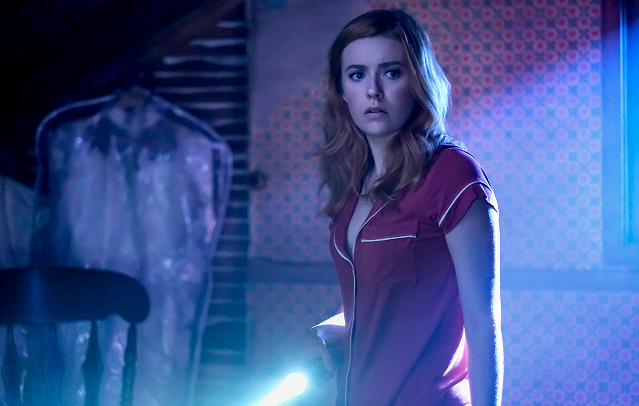 One of the personal rules I have for myself as a writer is “don’t write about something if you’re just going to write the same thing every other pundit in America has already written on this subject.” That’s one reason I don’t write about the president very often. But I’ve run into a dilemma here with “Nancy Drew.” Every other writer of TV reviews has included this line about the new CW show:

“This is NOT your mother’s Nancy Drew.”

I get it. It’s a takeoff on the old slogan “This is NOT your father’s” fill-in-the-blank, but it’s a girl’s show, so we’re all gonna be really clever and change it up. And it was probably clever of the first person who wrote it. But when you read it in every review, not so much. And my whole point here is to say something different from what everyone else here is saying.

But I’m sorry, there’s just no other way to put this. Technically, if you are a teen girl in the demographic this show is aiming for, it would have been your great grandmother reading the original books, that were first published in 1930. Your grandmother probably loved them in the ’50s. I know I loved them when I was growing up in the ’70s (although they were dated even then.) But this isn’t their Nancy Drew. It isn’t even my Nancy Drew. This is a different character altogether.

For one thing, new Nancy is working as a waitress in the local diner instead of as an assistant to her father. Her boyfriend, Ned is an African-American ex-con, and you get to see some steamy sex scenes. Bess and George are along for the ride, but instead of being besties, George is an old high school frenemy of Nancy’s (and Asian) and Bess is a kleptomaniac.

Not your mother’s Nancy Drew indeed.

At least her mother is still dead (although new Nancy is still struggling with the aftermath of her death whereas old Nancy never even mentioned it) and her dad is still a lawyer.

If you’re a fan of the “Riverdale” series, the dark take on the old “Archie” comic books that leads into this show, then you’ll probably enjoy the new Nancy as well. “Nancy Drew” has also drawn a lot of comparisons to one of the early CW shows “Veronica Mars.” And when “Veronica” first premiered she was often compared to the fictional Nancy (as is every other teen detective portrayed in movies and TV.) I was a huge fan of “Veronica Mars,” at least until Hulu rebooted it and broke my heart. From the very first episode I was hooked, wanting to know “who killed Lily Kane?” “Nancy Drew would have been better if it had followed the “Veronica Mars” profile of having a mystery of the week for her to solve as well as an overarching mystery of the season. Because I’m not sure this plotline is engaging enough to keep viewers interested for multiple episodes.

The show starts with a flashback to young Nancy solving the mystery of a missing child. We don’t get to see what other cases young Nancy has solved, because after the death of her mother, her life tanks, she doesn’t get into college and she’s given up on sleuthing. At least until this show opens and a wealthy socialite is murdered in the parking lot of the diner where she works. Every character on the show, including Nancy, quickly becomes a suspect and Nancy has to resume her sleuthing career to clear her own name. A big tip of the hat to the CW for casting Pamela Sue Martin (that would be MY Nancy Drew) in a cameo in this pilot.

Oh, and the other twist in this new show? THERE’S A REAL GHOST! So, we can call “Nancy Drew” the mystery love child of “Veronica Mars” and “Supernatural!”

One reason I hate starting new shows is that I hate getting all wrapped up in a storyline only to have the show cancelled before I get answers. The good news for fans is that this show airs on the CW, so it will have a longer chance to wrap up this mystery before this show gets cancelled. After all, “Supernatural” is still on after 15 years. But if you’re going to miss the ghost hunting Winchesters, maybe you can start following the adventures of the new real-ghost-seeing Nancy Drew.