An Impeachment Inquiry is Not Going to Reelect Trump 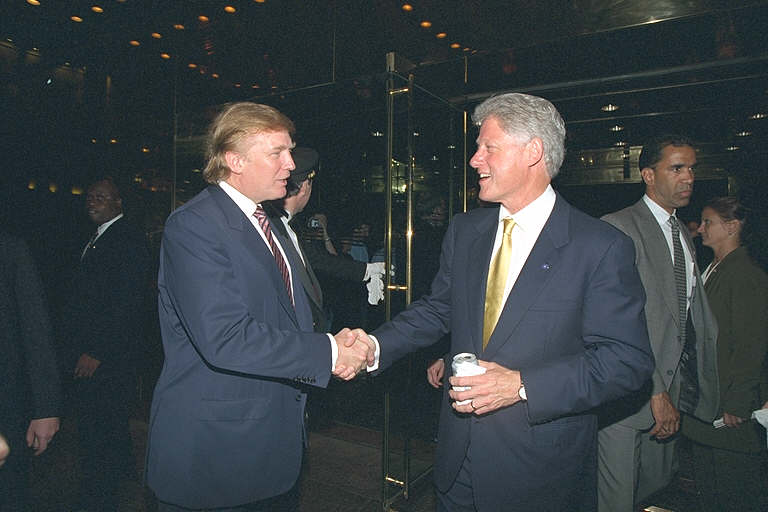 Photo by Ralph Alswang, Office of the President [Public domain]

Impeachment is not going to reelect Trump.

For most Americans adults, especially among Americans who write about politics, their lasting experience with impeachment is that of Bill Clinton. It was something of an odd political scandal; it looked as though Republicans, supported by the Evangelicals, were going after a sitting President for having a consensual affair (many conservative critics might argued that they were going after Clinton for lying about an affair, but that was not what people thought at that time).

Democrats gained five seats in the House and did not lose seats in the Senate in the Midterms of 1998. The party that holds the White House is expected to lose seats during midterms, so, that was considered a punishment against Republicans. Some polls show that Clinton’s approval increased after impeachment.

The experience with Clinton and the fact that the left flank of the Democratic Party has been pushing impeachment for months created the idea that it’s politically dangerous for Democrats to open an impeachment inquiry against Trump. Some talk about an impeachment enquiry reelecting Trump (Mick Mulvaney argued that an impeachment would bring some unrealistic Electoral College victory for Trump).

There is very little evidence that being impeached increases the popularity of impeached presidents. Impeachment proceedings (and large corruption probes, like Manu Polite in Italy or Operation Car Wash in Brazil) have the effect of increasing the rejection numbers of their targets.

The average voter is not the news junkie that we find on Twitter. Voters in general have a thin understanding about legislative process or criminal law, and they won’t watch Congressional proceedings. They don’t really know why the president is being impeached, but they see that their president did something morally reprehensible. Some of them might think that their president is a crook, but that all politicians are crooks. At least the president gets things done; he’s their crook. Or they’ll point out that they won’t vote for crooks. Or that all politicians are crooks and that participating in the political process is useless.

Some people will inevitably think that the president is the target of a miscarriage of justice. But it’s inevitable that his or her approval rating will take a hit, both in his party approval and his personal approval.

In fact, the best arguments against impeachment proceedings in general are precisely related to the loss of popularity for the president and his party. For instance, In Italy, a large corruption probe in the 90s destroyed the large center-right and center-left parties that governed Italy – and that created a political vacuum that was filled by Silvio Berlusconi (the center-left in Italy never recovered from the blow, almost thirty years later).

In Brazil the Operation Car Wash corruption probe and the impeachment of Dilma Roussef weakened the Workers Party (PT), to the point that it allowed a backbencher that did not pass legislation in his 28 years in Congress and who talked about raping his colleagues to be elected president. The same combination of an impeachment and a corruption probe brought the situation where the Peruvian president ordered the Parliament to be closed, with polls showing support for the decision.

The United States is a two-party system, where the parties are institutionally weak. That means that it’s much more difficult to increase the opposition numbers toward a party. It’s true that Democrats won a small number of seats in a midterm where, in theory, they were supposed to lose seats. But it’s also true that Clinton’s personal approval ratings took a hit in the long term. It’s easy to argue, for instance, that without impeachment Clinton would have been more likely to campaign for Gore, and given him a better chance of winning states like Florida, New Hampshire, Tennessee or Arkansas, and then win the election.

Liberals like to complain about the “but her emails” refrain in the election of 2016, but the email server issue worked against Hillary in part because it reinforced preconceived perceptions about both Clintons that predates to the impeachment proceedings. The impeachment against Bill Clinton did enormous damage to personal approval of Bill Clinton, and in the end that made the impeachment incredibly successful. A Bill Clinton untarnished by scandals and by an impeachment process would have been a much more efficient surrogate for Democrats.

The biggest political risk for Democrats instead of a backlash is something in the opposite direction. Impeachments are so effective at destroying the political capital of presidents that there is the risk of having Republicans in the future impeaching Democratic presidents over trivial issues. It’s easy to imagine a Republican House opening impeachment proceedings over Benghazi, over the investigation of email servers or over the IRS.

The embassy bombings in Africa in 1998 never made it onto the Time magazine cover. Nor did the nuclear tests from India and Pakistan in the same year. If Washington as a whole was less consumed with the impeachment of Bill Clinton someone would have thought that the people who exploded two embassies on Africa would probably try to strike the United States again. Having successive presidents and successive Congresses spending all their time with impeachment proceedings is not a recipe for good governance.

One of the reasons why Pelosi was reticent with impeachment proceedings is that she knew that it would require political capital that could be used to pass legislation. During the 80s and early 90s Democrats managed to pass all types of legislation, from the Americans with Disabilities Act to Immigration Reform, even with Republican Presidents (And a Republican Senate from 1981 to 1987).Both immigration and tax reform were passed with a Republican Senate in 1986 – and Republicans had the same number of Senators then that they have today.

The word “coup” is used a lot when people are talking about impeachment proceedings. Impeachments are legitimate procedures that are part of the Constitution and that do not involve tanks. But part of the problem is that impeachment can be used to change the president for ideological/partisan reasons. Dilma Roussef had her own vice-president articulating her impeachment process, and her successor did things that her voters didn’t vote for. Impeachment can be easily used to install a president with policies that could not be elected(OK, in this case Trump would be subsituted with Mike Pence, but, in theory, that could eventually happen).

There are several reasons why Nancy Pelosi should be wary of an impeachment. She could even lose some seats in rural areas, places where Democrats are already losing voters. Normalizing impeachment could be used to destroy future Democratic presidents, and could make the United States and the world less safe.

But an impeachment won’t reelect Trump. Trump might be reelected by other factors – the Democrats might run a bad campaign (they are good at the task of losing winnable elections); the economy is not so bad as to allow an automatic Democratic victory. But an impeachment inquiry is not going to reelect Trump. It’ll make his personal approval ratings to go down and his reputation will suffer. If he manages to survive and be reelected it will be despite, not because, of impeachment.