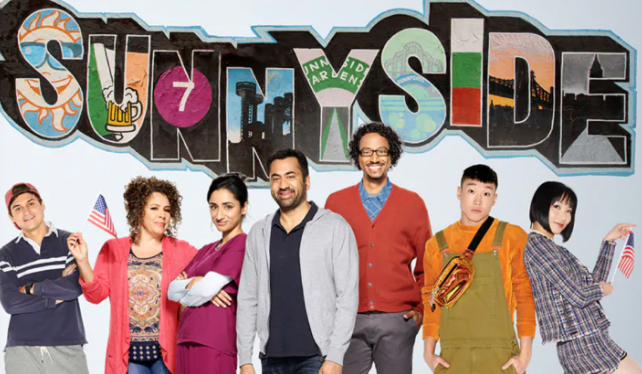 Thursday nights are the reason God invented DVRs. I don’t know what I’m going to do when the CW comes back from Summer vacation next week! This is why I fork over an unbelievable chunk of money to AT&T every month.

If Thursday night TV has a theme, it’s redemption. From the AA members on “Mom” to the widowers on “Perfect Harmony” and “The Unicorn,” to divorcee turned doctor on “Carol’s Second Act,” we see people overcoming hardships and turning their lives around. So, add to this list failed politician Garret Modi of “Sunnyside.” The show opens with a campaign video of Modi’s first run for city council, followed by the arrest video that ends his political career. In between apparently, there were years of not actually doing anything productive. That’s a familiar story to many of us who got involved in politics. You think your guy is going to change the world, and he ends up disappointing you.

Modi (played by Kal Penn) is definitely a guy at the end of his rope. He’s lost his job, his girlfriend and his apartment. He moves in with his sister because it’s slightly less pathetic than living with his parents. He’s making personal appearances for money when he’s hired by a group of immigrants to help them get their citizenship. He has no desire to do this, and no means by which to do it, but that doesn’t stop him from taking their money. Clearly, he’s a scumbag. If it weren’t for that drunken driving arrest turned viral video, he’d be the perfect politician: over-promising and under-delivering.

But a funny thing happens on his slide to irrelevance: He remembers what made him run for office in the first place. When a member of his ragtag group is picked up by ICE, Modi tries to help him and the rest of the group. And just maybe, he finds his road to redemption. If not, we won’t really have a show.

This may be the perfect sitcom for Trump’s America. Sure, it plays on all the stereotypes of immigrants: Indian doctors, rich Asians, hard-working woman with 17 jobs. But it’s heartwarming and funny. And the tales of these people and their love of this country reminds us that what made America great in the first place were the people who gave up everything to come here. A lot of people need that reminder these days.

This follows my favorite new show “Perfect Harmony” on NBC and the two pair nicely. Let’s hope they both find an audience.

So, that’s it for this week. I’ll be back after the CW reboots in October with reviews of “Nancy Drew,” and the show we’ve all been waiting for – “Batwoman!”