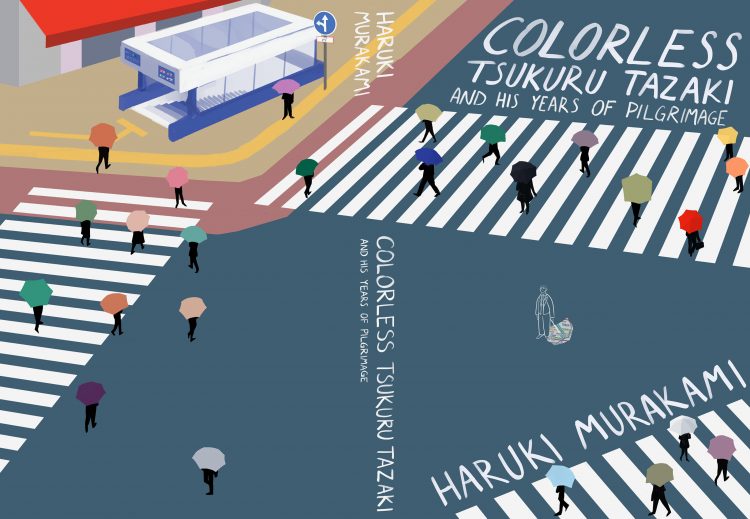 You know, in a sense, we were a perfect combination, the five of us. Like five fingers.” Ao raised his right hand and spread his thick fingers. “I still think that. The five us all naturally made up for what was lacking in the others, and totally shared our better qualities. I doubt that sort of thing will ever happen again in our adult lives. It was a one-time occurrence. I have my own family now, and of course I love them. But truthfully, I don’t have the same spontaneous, pure feeling for them that I had for all of you back then.”

At the center of Haruki Murakami’s novel Colorless Tsukuru Tazaki and his Years of Pilgrimage is a wound, the one caused when a young man was torn away from his childhood friends and abandoned, without explanation, to become a man on his own. Tsukuru was always the “colorless” member of the group in that his name had no reference to a color, but he also saw himself as nondescript, an “empty vessel”, and a bit dull. His main aspiration in life was to design train stations. The group grew up in the suburbs of Nagaya and none of them would have left had not Tsukuru gone to study in Tokyo. When we first meet him, he is at university and in a deep depression. When he returned home for a holiday, his friends avoided all contact with him. Finally, one got in touch- to tell him never to contact any of them again. Tsukuru was devastated, and ultimately transformed by the experience.

Sixteen years later, his new girlfriend Sara insists that he resolve the mystery of why his friends left him before she can move forward with him. And so, Tsukuru sets off to find out what happened so many years ago. As one might expect with Murakami, the answer isn’t entirely straightforward- there are things that might have only taken place in dreams with real world repercussions. There are digressions about people born with six fingers and a man who can see the color of each person’s aura. There is a mysterious musical prodigy. But, for the most part, this is a Bildungsroman about a young man overcoming trauma and finding who he is- not so colorless after all.

I don’t know if “Murakamiesque” is an adjective as of yet, but it really should be. His novels have a tone that is fairly difficult to describe “sweetly humanist, somewhat sad stories of quests of self-discovery that seem to take place in a less-menacing Twilight Zone”, is the best I can do. His interests: classical music, luxury automobiles, erotic dreams, etc. are all here. But it was a different sort of story than something like The Wind-up Bird Chronicle”, more realistic and personal. Murakami’s novels seem to take place on three levels: the realistic and somewhat quotidian, where his prose is often compared to Raymond Carver or Hemingway; the psychological, where his characters are often somewhat detached young men going through a profound personal crisis; and the surreal world of spirits, magic, and dreams. What makes his stories unique is how these levels weave together with certain motifs recurring, but without one mode dominating. I could see how one of the darker subthemes here could have become the central story line of a novel by, say, Stephen King. But, Murakami sticks to the highly relatable themes of how friendship and pain both shape us.

I suspect that some readers will find this book less satisfying than previous Murakami novels. Like Stephen King, his ending doesn’t really tie things up. And much of the plot consists of Tsukuru traveling to visit one of the friends after sixteen years, only to find them apologetic and willing to tell him the exact information he needs to know. Yet, the novel never really solves its central mystery- whether our actions in dreams have real-world consequences. Murukami also reminds one of Kafka or Lynch in that he leaves many of his mysteries open and unexplained. Some will find this frustrating.

But, for me, none of it really mattered. The real story was how Tsukuru became a stronger, wiser, and more fully-formed individual through his painful years of wandering. The rest was just the strange mysteries of life, which Murakami is particularly skilled at capturing.

One more thing: I’d be remiss if I didn’t mention Kim Shattuck. When I was about 23, the first girl who I really fell in love with made me a mix tape (!) with the great song “From Your Girl” by the band the Muffs on it. I also fell in love with the band, getting that debut album and everything that followed. They were hard to describe- sort of a mix of garage, power pop, mersey beat, Herman’s Hermits, and punk rock! But, for me, the Muffs were my go-to band for when I needed some cheering up. Kim Shattuck was an amazing songrwiter, a hilarious character, and a heck of a screamer. Like a lot of people, I was very sad to hear that she recently died after a private two-year battle with ALS. In fact, I was in tears.