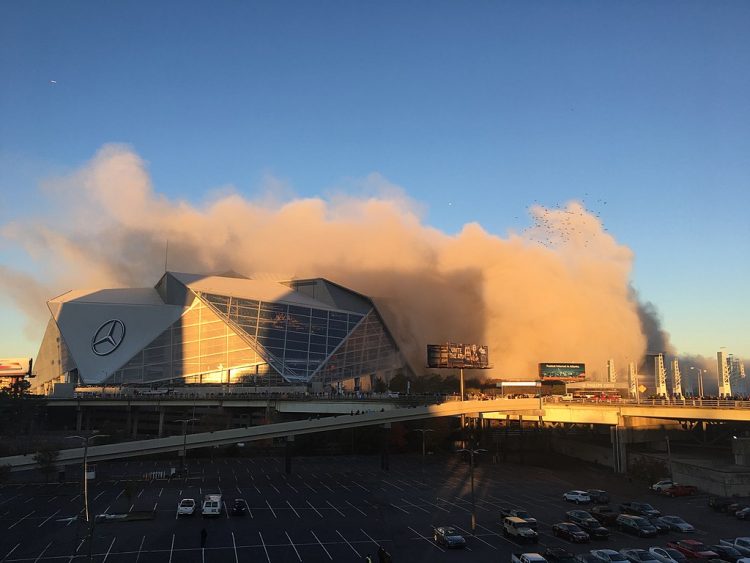 Implosion of Georgia Dome, Nov 2017, with it’s replacement Mercedez-Benz Stadium in the fore. Photo by Eoghanacht via Wikimedia Commons

What have I done to You, O watcher of men? Why have You set me as Your target, So that I am a burden to myself? Why then do You not pardon my transgression, and take away my Iniquity? For now, I will lie down in the dust, and You will seek me diligently, but I will no longer be.

To be an Atlanta sports fan is to suffer.

For many decades now, we have been loyal and faithful people. We suffered the indignities of the ’70s. The many last-place finishes. The complete absence from any playoff picture ever. We were briefly given hope in the ’80s when Dominique Wilkins played for the Hawks. I was present when we came THISCLOSE to knocking off the Boston Celtics in that infamous game 6 showdown. The ’90s should have been our decade, and the Braves did manage to bring home our one championship. We are the only city in America to lose not just one, but TWO hockey teams to Canada. And we haven’t just lost, we have lost in the most spectacular manners imaginable. Jim Leyritz homering in the 96 series broke our hearts (and Mark Wohlers’ brain.) Alabama coming from behind to destroy the Bulldogs championship hopes 2 years in a row.

I can’t even talk about the Falcons. It’s just too painful. (And anybody commenting 28-3 will be banned for life.)

So, on behalf of all Atlanta sports fans everywhere, we just have one question:

Why? What have we done? Sure, other teams have suffered under curses. The Red Sox had the Curse of the Bambino. The Chicago Cubs had the curse of the goat. At least their suffering was limited to one team and one sport. And they had some mythological explanation as to WHY they continued to lose? Atlanta? We got nothin’. We are, for the most part, good people. Yes, our history is checkered but so is everyone else’s. And do you know what brings us all together, black and white, men and women, old and young, Republicans and Democrats: It is our sports teams. I’ve worn my Braves shirt into a grocery store and people talk to me like I’m family. The day before the infamous Super Bowl meltdown, I wore my Matt Ryan jersey and people stopped me all day to tell me how excited they were. We don’t play petty mind games like painting the visitors’ locker room pink or making their band sit in the nosebleed section. We don’t pour beer on fans wearing jerseys from other cities.

You want a target, why not the Yankees? Their fans booed Roger Maris when he broke Babe Ruth’s record. Those people DESERVE to lose! Phillies fans are the most obnoxious in all of baseball, but they have 2 World Series trophies! Boston may be the most racist city in America, and you give them the Patriots? Penn State covered up for a pedophile! They shouldn’t even HAVE a football team anymore? Why is Atlanta singled out above all others?

Yesterday’s loss was just humiliating. Ten runs in the top of the 1st. A new playoff record. Another record-setting playoff loss for us. And on top of that, Brian McCann announces his retirement. At least we got to see him go out a Brave. We can take comfort in that.

Just tell us what we’ve done. We’ll fix it. Did we anger the Great Spirit with the Tomahawk chop?  Fine, we’ll all vote for Elizabeth Warren next year. The Braves failed to hand out their trademark Styrofoam tomahawks before yesterday’s game, but that just seemed to make it worse. We’ll get rid of them! We’ll change the name of the team! Or, will put Chief Noc-A-Homa’s tepee back up. We’re good either way.

Is there a living person responsible for all of this misery? Just tell us who it is, and we’ll take care of it. Or, if they’re no longer living, we’ll dig them back up and burn their remains. That’s what the dudes on “Supernatural” always do to end a curse. Do we have to sacrifice a live chicken? Become vegans? Wear sackcloth and ashes? You name it, You got it!

Oh sure, I know our soccer team won a championship last year. And according to the commercials I saw during the Braves games we apparently have a lacrosse team as well. But seriously, let’s talk about REAL SPORTS here. We deserve a championship. We actually deserve a whole bunch of them to make up for all the years of futility. I’m pretty sure I speak for all of Atlanta when I say we are prepared to do ANYTHING. Like a husband whose wife keeps saying she’s “fine,” we know clear well that it is not fine, that something is terribly wrong and that somehow, we are to blame (but we just don’t know what it is so we can’t fix it.)

And just so You know, if the Bulldogs lose to South Carolina this weekend, they’re gonna have to put me on suicide watch.