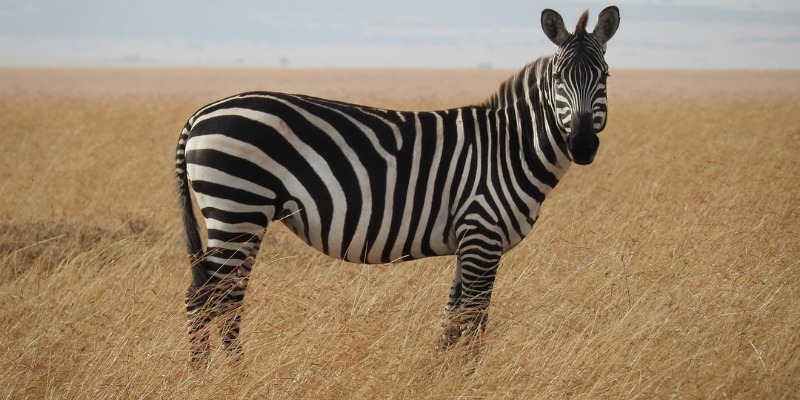 Did the zebras stripes evolve to keep away flies? Maybe.

[ThTh1] This week’s Ask An Astronomer comes from WindyPundit, who asked if there is any star near us that is about to go supernova relatively soon. Well … maybe.

There are two types of supernovae (actually, many many types, but two main ones). Type II supernovae are the explosions of stars with initial masses at least eight times the mass of the Sun. When stars run out of hydrogen fuel, they swell up until they ignite helium fusion, then swell up again. With low-mass stars, they shed their outer layers leaving behind the oxygen-carbon core, called a white dwarf. High-mass stars fuse heavier and heavier elements until they try to fuse iron, which absorbs energy and causes the stellar core to implode, initiating a supernova.

(I just taught this subject to my class and the gross oversimplification is giving me hives. For a more detailed explanation, go here.)

While we have a good idea of which stars will eventually go supernova, we have no idea when. The last stages of fusion take place over very short timescales, too short for the information to reach the surface. So while we know that some nearby stars like Spica (250 light years away) and Betelgeuse (640 light years away) will go supernova, it could be anytime over the next few hundred thousand to several million years.

(Type I supernovae occur when a white dwarf absorbs enough material from a companion star to trip over into an explosion. But those don’t appear to be predictable either).

There have been some indications of pre-explosive behavior that may foretell a supernova. But even then, we’re at only one case and one month before the event. More likely, we would see a wave of neutrinos shortly before the explosion became visible. But that would actually just be detecting the explosion using a different messenger than light.

A few years ago, it was predicted that a nearby star would explode in 2022 in a rare red nova. But that prediction now appears to be erroneous.

TL;DR: Yes, there are stars within a few hundred light years that will go supernova. No, we don’t have any way of predicting when it will happen.

[ThTh2] This week, a new meta-study claimed that eating red meat does not have the deleterious health effects that have long been insisted upon. The study is quite thorough and being fiercely disputed by the health researchers who have invested quite a bit in the supposed deadly effects of eating meat. The arguments here are quite technical and are mostly over how one creates a meta-study — combining multiple studies to get a better result. I am not convinced that red meat has no bad health effects but I am convinced the case for such effects is much weaker than had been claimed. This seems to be a recurring theme in health research.

[ThTh3] Why did zebras evolve stripes? Maybe to keep the flies away. Color me a bit skeptical on this one but it is an interesting conjecture.

As I suspected, presidential impeachments typically occur at the bottom of 11-year solar cycles. #analysis pic.twitter.com/3lmKe9J0p6

[ThTh5] Like many people, I need a bit of white noise to help me sleep, preferably a fan. A big reason is that I have had tinnitus — a ringing in the ears — for so long it wasn’t until I was in my teens that I realized that silence is, you know … silent. I thought that silence had a ringing noise. In any case, some researchers have looked into why fans help us sleep.

[ThTh7] Spectacular images of a volcanic eruption from space. The sheer power of our planet is humbling.

[ThTh8] Nuclear is the least deadly form of power. The main reason is that solar and wind don’t produce a huge amount of power so accidents during construction can skew the numbers quite a bit.

[ThTh9] The reason we make telescope so big? So we can peer deeper into the universe.

What's the difference between 1 minute on a 2.5-meter telescope, 3 minutes on a 4-meter, and 13 minutes on an 8.2-meter? I'm so glad you asked! It's this👇#HyperSuprimeCam #LowSurfaceBrightness pic.twitter.com/ASbRvOpwYg

[ThTh10] How do spiders fly? We’re starting to figure that out. Also, if you didn’t know that spiders could fly, my apologies for letting you know.