Wednesday Writs: The Scales of Justice on Trial in Chapman v. United States 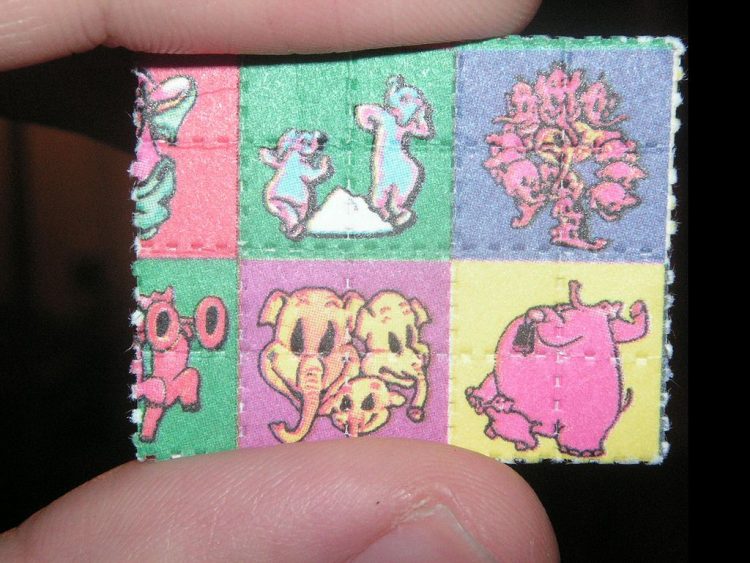 L1: During the late 80s heyday of the war on drugs, Richard Chapman and two other defendants were convicted in federal court for the sale of ten sheets, equal to 1000 doses, of LSD. The weight was determined to be 5.7 grams, which resulted in a mandatory minimum of five years. The defendants appealed their sentences for a logical reason: when weighing the LSD for sentencing purposes, the blotter paper was included in the weight. The LSD itself was actually 50 milligrams, or .05 grams.

The defendants’ argument was two-fold: first, they took issue with the government’s contention that the blotter paper was just a “carrier medium,” akin to weighing the rolling papers of a joint along with the weed. Secondly, the inclusion of the carrier medium in the weight constituted a violation of the equal protection clause, since rolling papers and other such packaging is not included in the weighing of other substances. Had the defendants carried the LSD in liquid form in a bottle, where it could be easily separated from the carrying medium and weighed, the defendants would have received the benefit of the lesser sentencing due to the 50 milligram weight.

The 7th Circuit Court of Appeals disagreed, holding that the LSD together with the blotter paper was a “mixture or substance containing a detectable amount” of the drug, because the drug could not be separated from the paper. The defendants then appealed to SCOTUS, in Chapman v. United States, our case of the week.

Writing for the 7-2 majority, Chief Justice Rehnquist noted that a single “hit” of LSD, without the carrying medium, weighs about .05 milligrams, so one gram of pure LSD equals 20,000 doses. Thus, the defendants, with their 1000 one-dose squares, were subject to a harsher penalty than a defendant found with 19,999 doses worth of pure LSD in a bottle.  Nevertheless, the majority upheld the lower court’s decision, comparing blotter paper to other inert ingredients often integrated with street drugs:

Chapman maintains that Congress could not have intended to include the weight of an LSD carrier for sentencing purposes, because the carrier will constitute nearly all of the weight of the entire unit, and the sentence will, therefore, be based on the weight of the carrier, rather than the drug. The same point can be made about drugs like heroin and cocaine, however, and Congress clearly intended the dilutant, cutting agent, or carrier medium to be included in the weight of those drugs for sentencing purposes. Inactive ingredients are combined with pure heroin or cocaine, and the mixture is then sold to consumers as a heavily diluted form of the drug. In some cases, the concentration of the drug in the mixture is very low. E.g., United States v. Buggs, 904 F.2d 1070 (CA7 1990) (1.2% heroin); United States v. Dorsey, 192 U.S.App.D.C. 313, 591 F.2d 922 (DC 1978) (2% heroin); United States v. Smith, 601 F.2d 972 (CA8) (2.7 and 8.5% heroin), cert. denied, 444 U.S. 879 (1979). But if the carrier is a “mixture or substance containing a detectable amount of the drug,” then under the language of the statute, the weight of the mixture or substance, and not the weight of the pure drug, is controlling.

The Court noted that Congress had made a distinction in pure weight and diluted weight of other drugs and could have done so with LSD, had they intended such a result. To rationalize what seems to be a contradiction, the Rehnquist cited an approach to fighting the drug trade by focusing on the way the drugs are marketed. Rehnquist wrote “Congress did not want to punish retail traffickers less severely, even though they deal in smaller quantities of the pure drug, because such traffickers keep the street markets going.”

The majority opinion was joined by Scalia, Kennedy, White, Blackmun, O’Connor and Souter. Justice Stevens wrote a dissent, joined by Justice Marshall. He found the result reached by the majority absurd, and extensively quoted Judge Posner, who dissented from the Seventh Circuit’s opinion:

A person who sells LSD on blotter paper is not a worse criminal than one who sells the same number of doses on gelatin cubes, but he is subject to a heavier punishment. A person who sells five doses of LSD on sugar cubes is not a worse person than a manufacturer of LSD who is caught with 19,999 doses in pure form, but the former is subject to a ten-year mandatory minimum no-parole sentence, while the latter is not even subject to the five-year minimum. If defendant Chapman, who received five years for selling a thousand doses of LSD on blotter paper, had sold the same number of doses in pure form, his Guidelines sentence would have been fourteen months. And defendant Marshall’s sentence for selling almost 12,000 doses would have been four years, rather than twenty. The defendant in United States v. Rose, 881 F.2d 386, 387 (7th Cir.1989), must have bought an unusually heavy blotter paper, for he sold only 472 doses, yet his blotter paper weighed 7.3 grams — more than Chapman’s, although Chapman sold more than twice as many doses…  In none of these computations, by the way, does the weight of the LSD itself make a difference — so slight is its weight relative to that of the carrier — except of course when it is sold in pure form. Congress might as well have said: if there is a carrier, weigh the carrier and forget the LSD. “

In 1993, the sentencing guidelines were revised to account for the weight of the carrier, giving each dose on a carrier a presumptive weight of 0.4mg.

However, the change in sentencing guidelines has not changed the methodology for charging; Chapman still controls, allowing the government to include the weight of the blotter paper when deciding which level of offense to charge. It is only for purposes of sentencing enhancement that the weight is mitigated.

L2: North Carolina wants to cash in on hemp, but the state’s law enforcement is not on board.

L3: As SCOTUS tackles LGBT anti-discrimination, some observers think Justice Gorsuch could be the swing vote in favor of the libs. Some don’t.

L4: Speaking of, here’s the story behind the case, which was argued before the court yesterday.

L5: Elizabeth Holmes’ lawyers want off her case due to the absence of two important witnesses, Mr. Cash and Mr. Green.

L6: A practice group leader with the Indiana State Bar made a real boob of himself in this email to other members.

L7: It took over a month, but Bloomberg Law has retracted a misleading and ill-conceived cancel piece on Leif Ericson, Labor Department official.

L8: You may have more to worry about with Blue Bell Ice Cream than just a dumb teenager licking it. 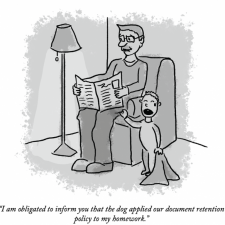 “I am obligated to inform you that the dog applied our document retention policy to my homework.”