The Trump Impeachment Letter, as Explained by A Christmas Story 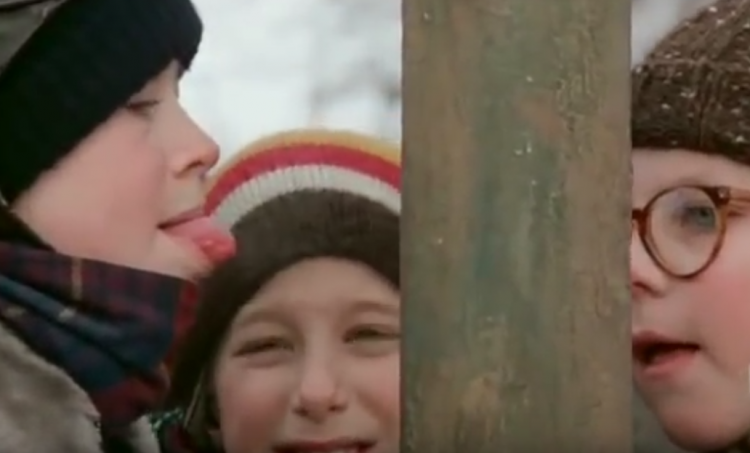 You may have heard by now about the letter the White House sent to House Democratic leadership on Tuesday:

In a letter to House Democratic leaders, the White House said the inquiry had violated precedent and denied President Trump’s due process rights in such an egregious way that neither he nor the executive branch would willingly provide testimony or documents.

“Your unprecedented actions have left the president with no choice,” said the letter signed by Pat A. Cipollone, the White House counsel. “In order to fulfill his duties to the American people, the Constitution, the executive branch and all future occupants of the office of the presidency, President Trump and his administration cannot participate in your partisan and unconstitutional inquiry under these circumstances.”

But in refusing to cooperate with what Mr. Trump on Tuesday called a “kangaroo court,” the president risked ensuring the very outcome he would rather avoid. House Democrats made clear that his failure to comply with their demands for information could form the basis for its own article of impeachment.

Let us pause there, since White House Counsel Pat A. Cipollone goes on for 8 more pages with points we’ve mostly heard already, and try to get to the issue at hand: Can the president just refuse to participate in his own impeachment investigation? The answer is complicated, which is were Ralphie, Flick, the unfortunate Schwartz, and friends come in to make the complex more explainable:

Congress: Are you kidding? Stick my tongue to that stupid pole? That’s dumb!

Congress: You’re full of it!

Narrator: NOW it was serious. A double-dog-dare. What else was there but a “triple dare you”? And then, the coup de grace of all dares, the sinister triple-dog-dare.

Narrator: Trump created a slight breach of etiquette by skipping the triple dare and going right for the throat!

Oh, for the heady days of slight breaches of etiquette…

Opinions vary as to whether or not President Trump wants to face impeachment. The reporting and opining on the subject ranges from him cowering in fear under the Resolute desk to standing upon it and ripping open his shirt Hulk Hogan-style while bellowing for them to come and take the presidency from his cold, dead hands like some real life Jon McNaughton painting. So who knows. Like most things with the president it’s usually better to try and divine intent from the actions, more than the tweets, and his actions say he is pushing the fight and pressing the issue. “Offense not defense” were the buzzwords being used out of the “anonymous White House sources” the last few days.

In other words, he is daring Nancy Pelosi, who held a press conference to announce an “official impeachment inquiry” as a double-dog-dare back, and now here we are with President Trump skipping a step in the hopes of getting on with it.

The courts will end up sorting a lot of this out. Congress has quite a bit of leeway in the how they go about impeachment, but the lack of a formal vote that Speaker Pelosi seems to purposefully be avoiding at the moment opened them up to exactly this sort of attack. At the same time Congress is vested with oversight powers, so the courts will be weighing that against executive privilege the White House seems to want to apply to everything these days.

For a Democrat congress that was whispering and leaking they wanted a “fast and focused” impeachment inquiry, bogging things down in court motions and the minutiae of separation of powers is not welcomed or helping them. It was foolish to think that wasn’t exactly what would happen, and combined with the lack of a formal vote despite — reportedly — having the numbers to pass it makes one wonder if there is an over arching plan or despite having dreamed of the moment for 3 years are the Democrats who are pushing for impeachment without a direction?

Nor is anything a sure thing for the president. He and his supporters can take some comfort in the lack of coherent and, frankly, competent investigation by Congress so far, with Rep Adam Schiff having a rough few days for his most recent performance at the gavel and Rep Jerry Nadler still smarting from the loathsome Corey Lewandowski putting a clownsuit on his judicial committee in an embarrassing display all around. Maybe that’s part of the reason Speaker Pelosi is slow walking impeachment, not just to protect her vulnerable members in swing districts but because her team might not be able to play in a game that — as of now — is doomed to be a loss once the ball goes over to the Republican held senate. But even with that, the president has the problem of still being Donald Trump, and picking fights, outrages, and unforced errors that rely on the other side being worse than you for your own team to continue to tolerate. So far they have, and they may continue to do so, but that is not much of a strategy and certainly not one that you can rest easy on while implementing.

The truth is this version of impeachment, should it occur, is going to be so far different than anything else, no one knows how it will break down. Short of something cataclysmic there will be no conviction in the senate, as there is not currently 67 votes to do so, and until that happens the rest of this is political equation is academic. Impeachment is a political event, dressed up as a legal proceeding, wrapped in a constitutional box, placed on a high shelf for a reason. It’s a Matryoshka doll of chaos and uncertainty to attempt to remove a sitting president, especially in the mist of an election cycle. Throw in the amplification of Donald Trump who is saying anything and everything that pops in his head out loud, and you have a hurricane that has yet to grace the shores of the American body politic. Anyone telling you they know how this turns out is kidding themselves. It would be preferable for the country to have any of a dozen other options play out: The President could be transparent and tone it down, Congress could do more serious investigating and less made-for-TV grandstanding, Speaker Pelosi could make up her mind, and on and on it could go…

Then again, Flick and Schwartz just kept escalating till things got ugly for everyone, and then didn’t know what to do except run off when the bell rang, leaving Ralphie shrugging to the begging Schawrtz that he didn’t know what to do but had to go. So that is what is going to happen here, for better or worse. We seem to be reaching the end of the daring each other phase of impeachment. Someone is going to have to stick some flesh to metal here, and then we will see what happens when the bell rings, everyone scatters, and the instigators of this plot line reveal if there was a plan for what comes next.

Either way, it’ll end badly. Like poor Schwartz, there is no way to take back the triple-dog-dare without leaving a piece of yourself attached to the flagpole.