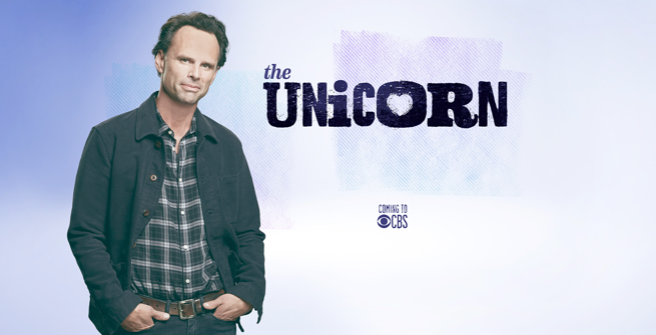 A few years ago, our church choir director lost his wife. All the single church ladies circled around him like sharks targeting a wounded seal.

I kept thinking about this while watching the new CBS comedy “The Unicorn.” The show follows the adventures of widower Walton Goggins as he jumps back into the dating scene a year after his wife’s death. He’s been so overwhelmed with his grief, that his house has gone to pot (dogs are lounging on the kitchen counter) and he and his daughters are still living off all the casseroles their friends brought over after the funeral. It’s the end of the free meals that pushes Walt to a breaking point, and his friends use this as an opening to tell him it’s time to move on.

So, he finds a dating app, fills out a profile, and his phone immediately blows up. Because Walt is the proverbial “unicorn” of online dating: a genuinely nice guy who is a caring father, gainfully employed, not on probation, has no substance abuse problems, and has only had sex with one woman in the last 20 years. “You’re factory fresh,” one of his female friends explains. “Technically, he’s certified pre-owned” he husband quips. Hell, I’D date him and I know he’s just a fictional character!

Unlike a lot of the other new shows this season, this one doesn’t have a big name star. I had to search through IMDB just to figure out where I’d seen them before (Hello, “Hot Tub Time Machine” guy!) It also doesn’t have any wild plot that will be hard to maintain after the first few episodes. Just the daily life of the average guy trying to move on with his life after the death of his wife. You know why there are so many shows with dead moms? Because single dads are funny! Watch him learn how to do laundry! And cook! And tell his teenage daughter the facts of life! Sure, we’ve seen it before. Maybe we’ve even seen it done better. But this is a show for our current time, and judging from the first episode, it will be a fun journey to watch.

I give it three stars, and I’m keeping in the DVR.