Review: ‘Joker’ Is a Disturbing Look at a Broken Man 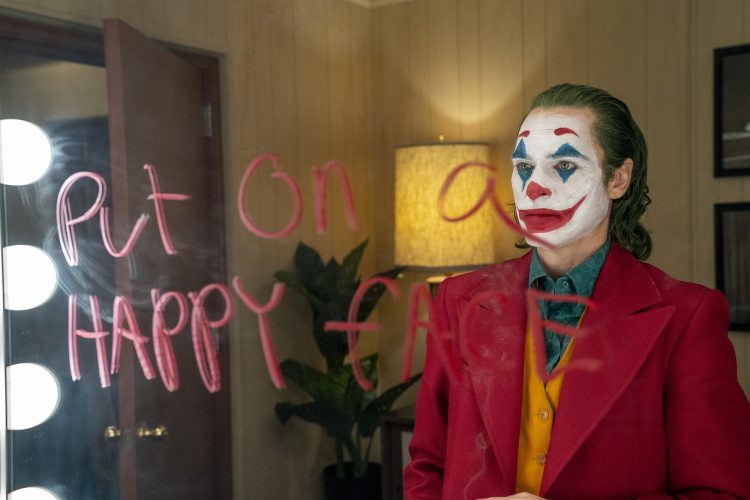 Words are powerful, and that’s why you need to be careful of the ones you choose. Certain descriptors are subjective, and can’t be measured. What is evil? What is crazy? How do you accurately determine what those are?

In “Joker,” starring Joaquin Phoenix and directed by Todd Phillips, Phoenix ultimately becomes the titular character, but for the majority of the film he plays Arthur Fleck. Fleck works as a professional clown – everything from twirling signs on a street corner to performing at hospitals for sick kids – while also trying to start a stand up comedy career.

Fleck is also seriously mentally ill. What exactly is “wrong” with him is kept vague, but part of his condition is that he laughs at inappropriate times. Fleck lives with and cares for his elderly mother. He helps her eat, bathe, and puts her to bed. In the beginning, at least, we don’t get much details on his mother’s condition. One of the biggest shockers in the film is when we learn more about her history.

Fleck is seeing a therapist and getting medication from a free clinic, and a brief mention of him doing a stint in an insane asylum (Arkham, for the comic nerds) is quickly blown past. The way “Joker” deals with mental illness is both realistic and sad. Budget cuts mean the clinic is closing, and Fleck can no longer get his medication.

Let’s just say that he doesn’t handle it well.

While he does wear clown makeup at several points in the film, what we know as the Joker doesn’t really show up until the final act. This is not a film about an evil clown, it is a dark story about an unhinged man slowly going insane.

This shouldn’t come as a spoiler, but the Joker kills several people. Here’s where “evil” is subjective. With one notable exception, every murder the Joker commits can be justified. It feels like he is pushed to the breaking point, and that’s why he explodes with horrible acts of violence. We see those murders in graphic fashion. But… the murder with no justification happens off camera. The scene builds and we wonder if it’s going to happen, and then suddenly he’s at his apartment while sirens are going off in the background. Was this scene done so the audience would still sympathize with Fleck?

Vanity Fair profiled Phoenix recently, and the entire thing is a great read. What stuck out were his thoughts on feeling sympathy or empathy for Fleck.

“I was going through [the script] and I realized, I said, ‘Well, why would we make something, like, where you sympathize or empathize with this villain?’ It’s like, because that’s what we have to do. It’s so easy for us to — we want the simple answers, we want to vilify people. It allows us to feel good if we can identify that as evil. ‘Well, I’m not racist ’cause I don’t have a Confederate flag or go with this protest.’ It allows us to feel that way, but that’s not healthy because we’re not really examining our inherent racism that most white people have, certainly. Or whatever it may be. Whatever issues you may have. It’s too easy for us and I felt like, yeah, we should explore this villain. This malevolent person. There’s no real communication, and to me that’s the value of this. I think that we are capable as an audience to see both of those things simultaneously and experience them and value them.”

This is not a super hero movie. There is nobody in a spandex costume. Nobody has super powers. There are minimal special effects.

With that said, though, there are some moments that will make comic book fans perk up. Thomas Wayne is a central character in “Joker.” In another instance of judging people and what is moral and good – he’s the bad guy in this film. And, again, “bad” is subjective. Wayne is doing what he thinks is best for Gotham City and its residents. It just so happens that they all hate him for it.

Thomas Wayne’s son, Bruce, pops up for a couple memorable scenes. He doesn’t have many lines, but he doesn’t need them. The implications of his appearances are enough to get comic fans salivating.

This is a great film. It’s already winning awards, and Phoenix is a front runner for the Oscars. His version of Arther Fleck and the Joker is an incredible take on a disturbed man. As Bob Dylan said, “When you ain’t got nothing, you’ve got nothing to lose.” That describes this character and his motivations. Go see “Joker.”

“You never turned around to see the frowns on the jugglers and the clowns, when they all did tricks for you…”

Journalist. I have an unhealthy obsession with The Simpsons and professional wrestling. I like to read biographies in my spare time.