A Love Letter To The Blue Ridge Parkway 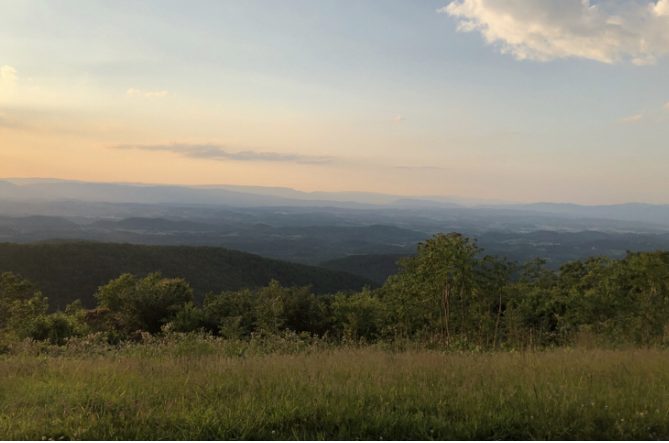 For most of us across the country, today was the first day it truly felt like fall. Not just because heat wasn’t breaking records like it was a game or something, but due to the general atmosphere and the northwesterly breeze that predominated, it finally felt like fall. Here where I live and where I attend school in Columbia, SC, after days of record high heat and humidity that made it feel like a bath to boot, low-to-mid seventies were welcome. Sure, they weren’t the fifties that my hometown experienced today, but they were certainly a start as we begin to slide into fall and ever closer to the end of the 2010s (yes, we’re close to the end of the decade somehow).

The first hint of fall in the offing also brought to mind some things I wish I were back in my hometown of Salem, VA for. Certainly high school football, which functions as a sort of religion where I’m from. I’m proud to report that the Spartans are 5-0 and look to be in the hunt for a fourth state title in five years after my senior year’s disappointing end (a playoff loss at home). Another thing which makes me wistful for my hometown is also the leaves, which are almost certainly starting their slow turn and eventual release from their trees. Autumn in Southwest Virginia produces the most beautiful colors and I’m sure that the typical array of oranges, golds, and reds in SWVA won’t translate to the Midlands of South Carolina. I’m also wistful for another feature of the Roanoke Valley, the Blue Ridge Parkway which runs through it and the one feature I find myself always entranced with, a specific overlook about thirty minutes north of town.

If you’re not familiar with the Blue Ridge Parkway, here’s a short primer. Like so many things in the Appalachians, the Blue Ridge Parkway was an extension of the Skyline Drive project which provided a scenic route through the northern Blue Ridge Mountains from Front Royal, Virginia to Crozet, Virginia (near Waynesboro and Charlottesville; if you’re familiar with the 1960s and ‘70s television series “The Waltons”, this area ought to be mighty familiar). Construction began in 1933 after intense lobbying by Senator Harry Flood Byrd of Virginia on FDR and the project was okay-ed that November by the Secretary of the Interior Harold Ickes.

Contrary to popular belief, or at least what I was always told growing up, the Blue Ridge Parkway was not actually a WPA project and in fact, most of the work was completed by private contractors. This meant…delays. According to the National Parks Service, about half of the project was completed by the time World War II began, leaving the other half to be completed after the war’s end. After the ravages of World War II on the nation, the project didn’t receive serious consideration to be complete until the mid-1950s when the National Parks Service essentially, it seems, wanted a gimmicky new addition to pass off for its 50th anniversary. Construction was planned to finish in 1966, though, of course, that wasn’t going to happen. The initial plans, and the plans as adopted by 1966, called for a section of the Parkway to pass around Grandfather Mountain in North Carolina and its private owner objected, citing the environmental concerns that have long kept the Blue Ridge Parkway the way it is, and in this case, protecting the natural landscape of Grandfather Mountain. After negotiations, discussion, and long planning, all 469 miles of the route were completed in 1987.

To this day, it remains a tourist mecca for the Roanoke Valley in much the same way that the Appalachian Trail does. Its natural beauty surprisingly enough draws visitors to the Valley simply to drive and to enjoy the views. Unsurprisingly, the tree-laden mountains that surround the Roanoke Valley are most popular in fall when the leaves start to change. In my experience, Roanoke attains its peak color for the season in just a few weeks from now around the 21st, though this can range out to Halloween in some years.

The fragility which drives the Blue Ridge Parkway is what makes it a mecca for the viewers. I hesitate to call it eye candy because I consider that term to be vulgar in this context, but it certainly is something which catches the idea and proves immensely beautiful. I’ve talked about fall exclusively in this piece, but I don’t think it does this little slice of heaven its due diligence. The Parkway is pure, unbridled nature. Tree-lined on the valley floors, it traces its path as the pioneer through the thick Appalachian forest. When I left it, it was still verdantly green with summer growth and the deer that are such a ubiquitous annoyance around the Roanoke Valley surely were, and still are, scampering along the side of the road-the reasons for the Deer Warning diamonds that pepper the side of the road.

In the spring and especially the late spring, the Parkway has a completely different character. A unique stillness permeates the world around you as one makes their way up to the ridgetops and outcroppings that form the overlooks on the road. From what is still a bustling and ever growing and expanding city, it seems a world away. This is even when the reality is that the same city that one has escaped from is not only close by, but if one preens one’s head just the right way so they can see around the mountains which tend to frame vision, you can see the signs of the urban stratum, suburbia, and exurbia which are omnipresent on the Great Valley floor.

In fall, the Parkway takes its own its most personality and certainly its most colorful character. The verdant and life-signaling green fades out of the trees gradually. In early September, a life of green is still present for the oaks, maples, and other species of tree which line the road (American oak, red maple, and other deciduous trees predominate, though there is the occasional pine on the mountain as well). By the end of September, the veneer of life is not shattered, though the descent to the winter nudity of the trees is an evident fact. In October, from the first dappling which one can typically notice to the eventual variety which shows its beautiful face to the valley, the forests which line the Blue Ridge Parkway and make it that which I love find themselves at the end of their yearly lives. 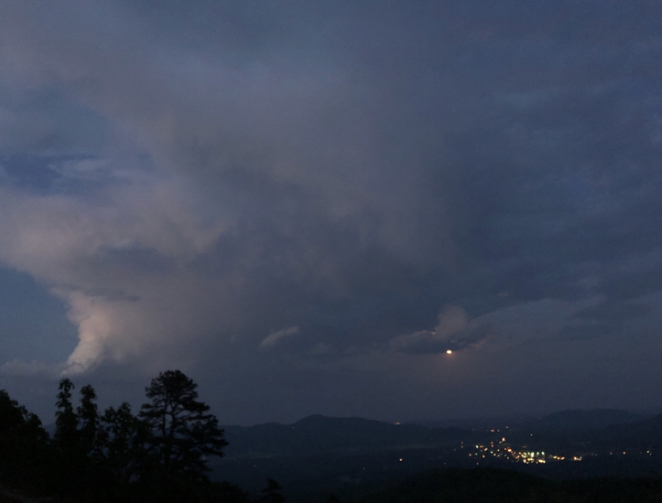 I have never been up on the Parkway in winter (and yes, we in Roanoke refer to going to the Parkway as going “up to the Parkway”), mostly because the conditions don’t lend themselves to the appreciation of winter from the roof of the Valley. Winter in the Roanoke Valley often means many things: cold sunshine and brisk winds most days, winter storms that drop snow, but feel like Mother Nature wringing out a rag on top of us when pockets of tropical moisture meet cold Canadian air as storm systems push their way up the valley or up the coast. When covered in snow, the Parkway is closed to the general public as a safety precaution. There are no outlets from residential roads and sometimes, even county and state officials are not mere seconds or minutes but tens of minutes and hours from those who decide to journey up the route. That doesn’t stop me at least from recognizing there must be some austereness that lends itself to tranquility and deep peace on snowy nights and late evenings.

This leads to the other part of my love letter, not the Parkway as a whole, but to the particular overlook on the mountain known as Harvey’s Knob. From where I live, it’s around fifty minutes up to the Overlook, up 81 and down 460 to the place where 460 meets the Blue Ridge Parkway and then up 10 miles to my favorite overlook.

There’s a certain tranquility which hits me as I reach that overlook. It’s not something that I can explain other than to say that watching the sun go down over the Appalachian Mountains on the other side of the Great Valley is something which fills me with an intense sense of peace as I see it. There aren’t many dark sky places in Virginia either, and the closest area to me is some three hours northwest of where I live in geographically large, but less populous Highland County. The fact that Harvey’s Knob isn’t a dark sky location doesn’t bother me. I’ve had quite a few conversations with friends feeling the cool breeze around us as those winds rustle through the trees and the night sky opens from the tip-top of the heavens down around us. It’s a peace I’ve never found in a city and it’s a slice of America’s natural beauty and it is one of the few things I love on this Earth.

I call Southwest Virginia a little slice of heaven. She’s beautiful as much as she is inconstant (we Virginians love to complain about our weather and for good reason), she is the land I call my home. However, the microcosm of the Blue Ridge Parkway is something that the wider region can’t hold a candle to. The stark beauty, the austereness which permeates the very air, and the incredible peace I find there make me wistful for home. I love my hometown, but I don’t miss it; I miss the Parkway and the mountains it transverses.