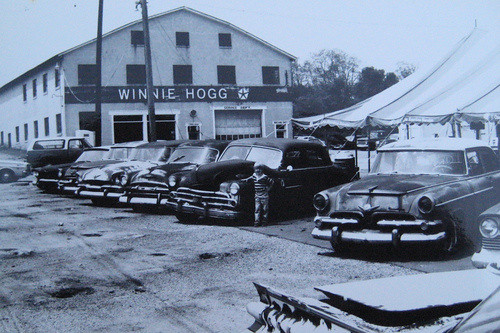 Some cases in the history of American jurisprudence matter because of they mark great strides in civil rights. Others change the course of politics. Some establish precedent that become solid bedrocks of our justice system.  Today’s case, though, is not of great import to our daily lives, or a legal landmark, the name of which is part of our lexicon like Miranda, or Roe. It’s just a case about some Schmuck.

Literally, it is the case of Wayne T. Schmuck.

[WW1] Mr. Schmuck was in the used car business, which is absolutely the perfect job for someone named Wayne T. Schmuck. Schmuck devised a scheme in which he rolled back the odometers of high-mileage used cars before selling them to unwitting proprietors of car lots in Wisconsin. The dealers then sold the cars to customers at prices befitting the faked mileage. As is the practice, the dealers mailed the title application to the state department of motor vehicles via the United States Postal Service. When Schmuck’s scheme was uncovered, federal prosecutors charged him with 12 counts of mail fraud, because the mail was used in the course of his crimes.

Before his trial, Schmuck moved the court to dismiss the mail fraud counts, arguing that the mailings were not part of his fraudulent scheme. In the alternative, he asked the court to instruct the jury that they could find him guilty of odometer tampering as a lesser included offense. The court denied the motion and the jury then convicted Schmuck on all 12 counts. Schmuck then appealed his case to the 7th Circuit Court of Appeals, who remanded the case for a new trial. The panel of judges at the 7th Circuit were divided, but agreed with the District Court’s opinion that the mail fraud counts were valid; however, they thought the court should have permitted the instruction on the lesser charges. The appeals court applied the “inherent relationship” test. Under this analysis, if the facts of the indictment, as proved at trial, would support the lesser charge, then the charge is a valid “lesser included offense” and the jury should be permitted to consider it. The 7th Circuit panel concluded that on the evidence presented, the jury could have found Schmuck guilty of odometer tampering, while also deciding that the mailing of the title application was too remote to be fraudulent.

However, because the panel was divided, the 7th Circuit vacated their decision and reheard the case en banc (meaning before the entire court. This time, the appeals court discarded the “inherent relationship” test and instead prescribed the “elements test”. The elements test requires that all elements of the lesser charge must be included in the charged offense. For example: if a defendant is charged with armed robbery, and unarmed robbery included all the same elements except the presence of a weapon, then robbery is a lesser included offense of armed robbery. There is nothing that must be proven in a robbery case that is not also required to be proven in an armed robbery case. The test is not fact specific; it is the elements that must align. Applying this analysis to Schmucks case, it is clear that rolling back an odometer is not required to commit the offense of mail fraud. Schmuck’s conviction was to stand.

Schmuck appealed to the Supreme Court, in Schmuck v. United States. The Court took up the issue of whether mail fraud was too far removed from the scheme, and also considered whether the inherent relationship test or the elements test is the appropriate analysis of the availability of a lesser included offense. Schmuck again contended that his scheme had been completed prior to the mailing of the title applications and thus, mail fraud was not an appropriate charge. The Court rejected his argument, reasoning that the mailing of the titles was crucial to the success of the scheme, because he would no longer be able to do business with his customers if they were unable to successfully title the cars.This was not a surprising result; it is very common for the feds to use charges of mail fraud as a vehicle to prosecute offenders- one of the charges against Felicity Huffman in the college admissions scandal was conspiracy to commit mail fraud.

The Court also adopted the elements test as well, and agreed that odometer tampering is not a lesser included offense of mail fraud:

Turning to the facts of this case, we agree with the Court of Appeals that the elements of the offense of odometer tampering are not a subset of the elements of the crime of mail fraud. 840 F.2d at 386. There are two elements in mail fraud: (1) having devised or intending to devise a scheme to defraud (or to perform specified fraudulent acts), and (2) use of the mail for the purpose of executing, or attempting to execute, the scheme (or specified fraudulent acts). The offense of odometer tampering includes the element of knowingly and willfully causing an odometer to be altered. This element is not a subset of any element of mail fraud. Knowingly and willfully tampering with an odometer is not identical to devising or intending to devise a fraudulent scheme.

Scalia dissented, joined by justices Brennan, O’Connor, and Marshall, cited several previous cases that he believed contradicted the majority’s decision. But in the end, poor Schmuck lost his case and remained a federally convicted felon, thanks to Justice Blackmun’s opinion, joined by Justices Rehnquist, White, Stevens, and Kennedy.

[WW2] ICYMI Burt Likko’s excellent breakdown of United States v Nixon and all the ins and outs of Watergate is can’t miss, and timely, reading.

[WW3] Eh, maybe, but this was more probably an outlier, and the real test will continue to be uniformed officers on duty and qualified immunity. Amber Guyger’s guilty verdict and how juries see police officers.

[WW4] Once marijuana legalization happens, then starts the debate on what to do with all those convictions. These folks are getting a head start on educating and advocating for records expungement.

[WW5] What took so long: “A figure in Luzerne County’s notorious “Kids for Cash” scandal has lost his law license. Ex-judge Mark Ciavarella has been disbarred by the Pennsylvania Supreme Court. Ciavarella is currently serving a 28-year federal prison sentence after he was convicted in 2011 on 12 criminal counts.”

[WW6] Who said bankruptcy law was boring? Sears’ bankruptcy has all sorts of drama: “The vendors claim that lawyers, bankers and other consultants have squirreled away some $30 million out of the estate to pay their bills. As of Sept. 21, the estate had just $50.1 million in cash, according to court documents.”

[WW7] The lawyering for the person charged with driving through a Cook County mall has begun, and no it wasn’t the Blues Brothers.