Analyze This: 2004 Video of Donald Trump and Jesse Ventura 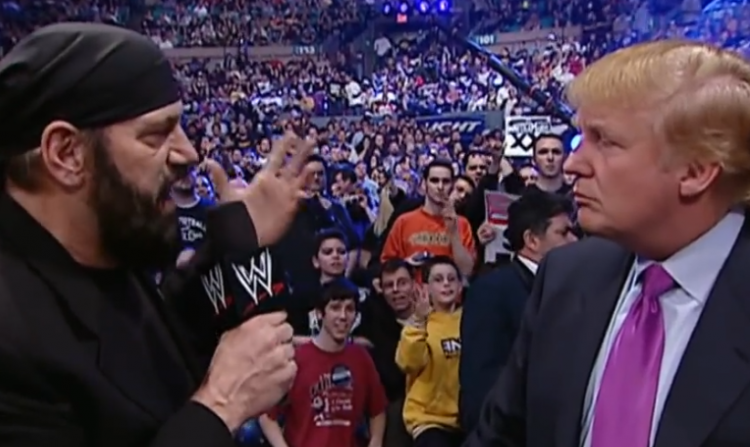 If you had told me 10 years ago that one day a member of the WWE Hall of Fame would be president, I would have responded, “Yeah, Jesse Ventura has a lot of unique ideas and is very popular among all political parties.”

But, it turns out that the first WWE HOF member in the White House was not Ventura, a member of the 2004 class. Rather, it was a 2013 member of the Celebrity Wing who made it there first — Donald J. Trump.

Trump’s campaign for president is something that he had talked about for nearly three decades, but nothing that we actually thought was going to really happen. But as we all know by now, in one of the most shocking Election Night upsets in history, it happened in 2016.

But, before that WWE HOF’er was making political news, a different WWE star was shocking the world in his own way. An early ‘90s exit from WWE, along with a movie and TV career that was stalling out, led Ventura to politics — first as mayor of Brooklyn Park, Minnesota, serving from 1991 to 1995, and then finally as governor from 1999 to 2003.

Fresh out of state politics, people wondered what would happen next. During his 2004 induction speech for the WWE HOF, Ventura ended on a cryptic note, saying, “Why don’t we put a wrestler in the White House?”

WrestleMania XX, held the next night, is mostly known for being the professional high-point of family murderer Chris Benoit, as he won the championship in the main event. But, about an hour or so before confetti rained down upon Benoit, Ventura took to the ring as a special surprise to the fans. He had not been a regular in wrestling in nearly 15 years at that point, and hadn’t been in a WWE ring since a guest appearance at SummerSlam 1999.

People who don’t know much about wrestling may be confused by the next part — “He interviewed Donald Trump? Why?” Trump actually has a long and storied history with WWE, and by the qualifications of what it takes to get into the Celebrity Wing of the WWE HOF (being a celebrity who has made an on-camera appearance is really all it takes), Trump is a worthy member.

Two of the early WrestleMania events were held at Trump Plaza Hotel and Casino, and a few years after this WMXX appearance, Trump would infamously appear in a “Battle of Billionaires” confrontation which saw WWE chairman Vince McMahon get his head shaved.

The 2004 video — from the WWE’s official YouTube channel — and a transcript are below.

Jesse Ventura: Let me say this, what would WrestleMania be without Jesse “The Body” coming out and doing an interview with somebody? Just like 20 years ago! Now, where’s my man? Who am I looking for out here to interview? Ah ha! Who is it? It’s the star of the number-one rated TV show on NBC, “The Apprentice.” [Crowd boos] Oh yeah, the host of WrestleMania IV and V, none other than New York’s own, Donald Trump!

[Trump stands up and waves, as the crowd boos]

Ventura: Donald, great to see you. First off all, I’ve gotta say, the hair looks great.

Trump: Well, it means a lot. I was involved with Vince [McMahon] for a long time, he’s a great guy, he’s done a really unbelievable job. I’m here with my son tonight, and we’re having a good time.

Ventura: You’re having a great time. Now, I’ve gotta ask you, now we’re getting to the personal stuff, Donald. If I were to get back into politics, would I expect your moral and financial support?

Ventura: One hundred percent, if I get back into politics?

Ventura: You know what, I think that we may need a wrestler in the White House in 2008!

Ventura: Donald, thank you, have a great time. Let’s get on with ‘Mania!

Announcer Jerry Lawler: Jesse “The Body” Ventura, and Donald Trump. Boy, there’s a pair. What about a —”

Announcer Jim Ross: “A wrestler in the White House?”

Lawler: “Yeah, and maybe a billionaire as the Vice President.”

Wow! Could you believe what could have been in 2004, had Ventura actually gone through with running for president? And, to add on the announcer speculation at the end of the video, what if Trump had been his VP? This was before Trump’s true colors had been shown, as he was still popular among liberals. But, this was a time before Trump had weaponized hate — had he gotten into politics in 2004, the skeletons in his closet (failed businesses, tax returns, divorces, cheating, etc) would have derailed the campaign before it got off the ground.

Who knows what would have happened had Ventura become the president. What if he ran for reelection in 2008, we wouldn’t have seen the rise of Barack Obama. Well, the same if John Kerry had actually defeated George W. Bush in 2004. Or, to show how much one moment can change the course of history, what if Al Gore had won in 2000 — then Ventura wouldn’t have been looking into running, and everything would have been much different.

And, legend has it that Trump didn’t seriously begin to work on running for the presidency until he was verbally eviscerated at the 2011 White House Correspondents’ Dinner (Seth Myers: “Donald Trump has been saying he will run for president as a Republican, which is surprising, since I just assumed he was running as a joke.”).

So, anybody’s one action — to run or not — can have huge implications, and it’s crazy to think back to what could have been, or what should have been. Thoughts? Leave them in the comments.

To close, here are some words of wisdom from Vince McMahon. 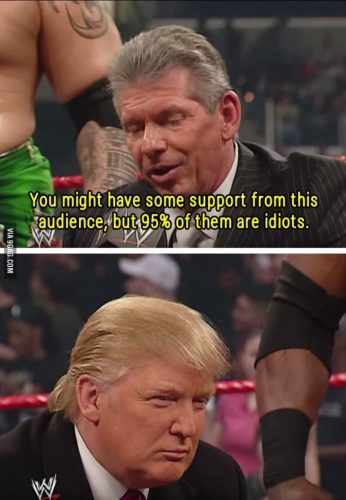 Journalist. I have an unhealthy obsession with The Simpsons and professional wrestling. I like to read biographies in my spare time.