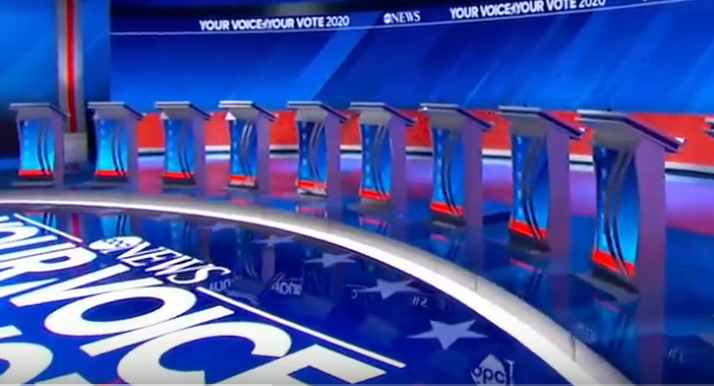 Just when you thought the insanity of the baseball team-sized Democratic Primary field was starting to ebb, the hapless DNC is here for you:

A DNC spokesperson told POLITICO that all candidates will participate in one debate that evening. The news was first reported by CNN, which is co-hosting the debate in Ohio along with The New York Times.

I would love to have some insightful, thoughtful bit of analysis here, but…frickin’ why?

The idea of a primary is to find the candidate best suited to win the election. It is not supposed to be a party-wide T-ball game in which each participate is guaranteed an at-bat and their moment of glory. Booker and Castro have both privately and publicly been admitting they are near the end without a miracle that comes bearing dollar signs. Harris is in full-blown free fall, trailing the likes of Yang in her home state of California. Tucker Carlson’s favorite candidate, Tulsi Gabbard, is returning to the over-bloated stage after having missed the last debate and coming off a week where she was against impeachment before she was for it. Andrew Yang is continuing his mostly social media-fed lark of a campaign, while Tom Steyer took “buying himself an election” from a folksy saying to a mission statement. Beto O’Rourke has been systematically ruining any chance he has at future office by going so far off the deep end on gun issues that even the Daddy Warbucks who spends millions funding the fight on such things, Michael Bloomberg, described his recent statement as “so impractical” and “just isn’t all that productive.”

Really the only three people that should be on the stage are the three that have been the leaders for some time: Joe Biden, Elizabeth Warren, and Bernie Sanders, and – let’s be honest – Sanders is only there because his hardcore supporters are willing him to be so. Pete Buttigieg has probably done enough to be included if you want to expand the field to someone under the age of 70, and if you just have to have a slightly more moderate option included in case Joe Biden falls down – which is looking like a distinct possibility – throw the steady Amy Klobuchar in there as a fall back.

But that’s it. The rest of them are taking up space, and frankly, wasting our time.

This isn’t the old days, where you are discovering things about the candidates. We have Google and YouTube, and enough debates from this cycle alone to know what we are dealing with. The big “viral moments” from the other debates, which are the arguments the also-rans make that they can break out, didn’t affect the polls much, if at all. Tulsi wacked Kamala Harris and promptly failed to qualify for the next debate. Cory Booker got a sick burn in on Joe Biden, but the senator’s own current flavor of Kool-Aid is telling donors he is about done unless something changes. Julian Castro was roundly criticized by nearly everyone for what was perceived as an unfair and high-handed attack on Joe Biden. Kamala Harris’ own pre-planned attack on the former VP over busing is now looking like it was the high water mark of a lackluster and disappointing campaign. But hey, some folks that shelled out for them will still have the T-shirts.

What is needed is a focus on the candidates who actually have a chance to win the nomination. Elizabeth Warren having to defend her plans for more than 90 seconds, not just declare that she has them, and spar and parry some — any — pushback from a candidate or moderator that she thus far has escaped. Sanders could stand to be asked why he is a better candidate than Warren when they believe mostly the same things and the latter is far more palatable to folks than the former, and defend his proposals beyond “I wrote the damn bill!” that wasn’t passed anyway. Biden fielding questions on his fitness, his checkered 40+ year record, and yes, he needs to be asked about and answer the Ukraine questions. Democrats can yell “right-wing talking points!” all they want, but you better get some practice in now on those things that Team Trump is going to be playing on repeat.

The specter of the impeachment drama should make the DNC and the campaigns tighten up and bear down, not relax. It’s going to be harder for the candidates to get airtime beyond commenting on impeachment, harder for their other messaging to be heard, and shorten the window they will have to do so before the Iowa Caucuses first of the year. The DNC should have trimmed the fat from this electoral exercise months ago, and the failure to do so is going to be even more glaring when the candidates gather in Ohio. November’s threshold is reportedly going to bump up, but a party that is needing unity for some very tough fights ahead should be more Fast and Furious and less Margaret Mitchell by now. President Trump might be vulnerable, and may be reeling, but the one certain way he will not be beaten is by committee. The DNC and party powers that be need to get on with getting their champion chosen for the war to come.

There has been a prevailing notation in some corners of Team Blue that no matter who the candidate is, victory is inevitable. Democrats who want to win should shush those folks every time they even try to say that. President Trump, even weakened, will be formidable for a party that has shown little sign they understand just how it is they lost to Donald Trump in the first place. The wise candidate, and party, would assume impeachment is not going to remove him, scandals will not affect him, and the 2020 election will be one of the most contentious, off-the-map chaotic political events in recent memory. Anything short of that mindset, and the dangers of assuming victory could lead to a repeat of the shock the party experience in November 2016.

The old sports adage is you play like you practice. The Democratic Primaries and debates are practice, proving grounds before entering the arena with a Trump campaign that will be playing to win, playing for keeps, and playing without any regard to the consequences. The DNC should get serious about how they are conducting their primary. Before it is too late.