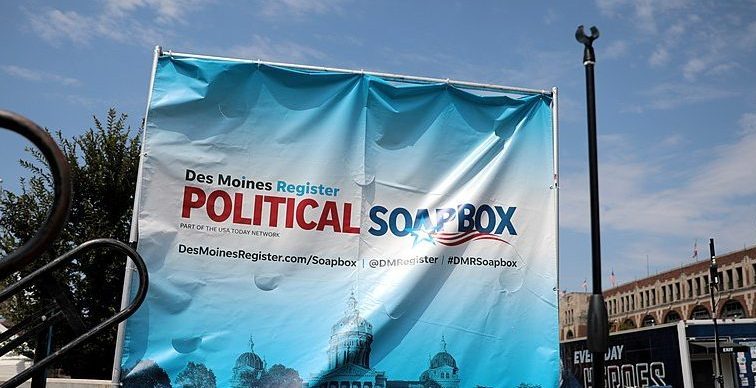 Before the phrase “there is nothing new under the sun” was canonized in scripture, it is safe to assume it had already been in the vernacular for a while. Even working with half of the human history we have today that the writer of Ecclesiastes had, it still would have held true, because human behavior is universal and timeless. Especially the lesser angels of our nature, which exhibit themselves in bad decisions, failures of leadership, and the follow on questions of “what were you thinking?”

That phrase has been uttered a great deal in regard to the Carson King-Aaron Calvin mess. When the Des Moines Register tasked Calvin with working up a profile on the viral sensation, it is doubtful they thought they would end up here, days later, with one less employee, a hit to their reputation, and media and public alike questioning their editorial process and judgement. After all, the feel good story of a beer sign guy on ESPN giving away a million dollars in charity is about as boilerplate an assignment as a writer can get. It writes itself, practically.

Maybe that was the problem. Maybe Aaron Calvin just needed to do some big “J” journalism instead of just working a profile and pounding out a few hundred sunny words on how the sick children of Iowa would benefit from a goofy sign at a football game. Maybe that’s why Calvin went combing through King’s social media postings going back as far as he could. Maybe he just couldn’t help himself. Maybe there isn’t anything new under the sun, and reporter gotta report, or at the very least go on a misguided attempt to Paul Harvey-the-rest-of-the-story a story that was already great.

Whatever the reason, Calvin uncovered tweets that King had sent as a teenager that were racial and wrong. We know this, because King himself did a presser and apologized, owned his mistake, asked for forgiveness, and explained he understood why folks would pull away. Then he said something profound: “

“The Des Moines Register has been nothing but kind in all of their coverage, and I appreciate the reporter pointing out the post to me. I want everyone to understand that this was my decision to publicly address the posts and apologize. I believe that is the right thing to do.”

That press conference was before the Des Moines Register article, and the backlash against Calvin and the Register was immediate. The Register went ahead and posted the profile a few hours later, and even though it was mostly positive, the damage was done. Everything the Des Moines Register did after that just made it worse. First came the realization that Calvin himself had very questionable things in his own social media, started deleting old tweets, then apologized and locked his Twitter account. The Register’s social media postings continued to get ratioed and draw withering criticism, and finally Executive Editor Carol Hunter took to the pages of her own paper with a terribly thought out piece entitled: “We hear you. You’re Angry. Here’s what we are doing about it.” After informing readers that the reporter in question was no longer with the paper, this summary was given:

The Register reporter writing the profile had discovered the tweets on King’s public timeline earlier in the day, and he asked King about them. King, to his credit, expressed immediate regret.

The timeline gets a bit complicated here: Register editors discussed at length whether to include information about the tweets and King’s remorse in our profile, but we were still editing the story when King talked to local TV stations. Busch Light announced its decision shortly afterward. We hadn’t yet published anything about his tweets when some people on social media began accusing the Register of doing King wrong and ruining a potential opportunity to continue raising millions of dollars to help sick children.

Many of you have said the timeline is beside the point. You’ve asked instead why we chose to look into King’s tweets in the first place. Some of you then noticed questionable tweets by the reporter himself, which the Register then began to investigate.

The idea that the paper’s coverage had nothing to do with pulling of support is ridiculous on its face, but the real problem here isn’t the horribly managed reactions, but the utter failure of leadership prior to that. The whole of the piece is an embarrassing exercise in CYA couched in journalistic buzzwords and paragraphs containing many words but somehow missing the only ones that should be uttered by a leader after a systemic failure like this: This was wrong.

Human nature is universal, there is nothing new under the sun, and whether it’s a paper, or Walmart, or any other organization the principles of good management and leadership can be applied. What should have happened, during their vaunted “journalistic process” is for one of the adults in the room to say “Hey, maybe the horrid musings of a 16 year old isn’t relevant to the millions of dollars for a good cause and feel-good we have to work with here.” One of the adults, whose job it actually is to rein in their reporters on subject matter if the title “editor” still means anything, might even have the foresight to go “This is bad not only in practice but for our young reporter here, we need to protect him from himself and his really dumb decision making.” But they didn’t. By their own admission they thought what he did was fine enough to go forward with it, yet it is he who is under the bus while the rest of the cabal that perpetrated this stupidity apparently will skate by with a “that reporter is no longer with the Register” while the ecosystem that enabled, endorsed, and then killed his job for their own convenience continues as it was before.

Folks that focus on the “cancel culture” aspects, or even the narratives of the media having a disconnect from “regular people” all have fine points to debate, but this story can be broken down to some of the basics of human decency, business function, and leadership principles, all of which are not new at all. Human decency says maybe 16 year olds do stupid stuff, and especially if they own it and apologize for it maybe a media outlet shouldn’t get their jollies by chasing that story. Business wise, the eyes of the nation will be on Iowa for the next five months, and one of the go-to outlets for local coverage — the coverage those of us not there should be relying on the most — is now called into question when they can so blatantly try to shine the public on about their own behavior in this fiasco. The appalling leadership failure, that had multiple pit stops of bad decision making, that lead to the editor basically saying “it’s all his fault and he’s gone, kids got their money, no harm no foul” should make any reporter or employee question why they would want to work with such people who would not only set you up to fail, but make sure the failure was all your fault.

Carson King said really bad things, but apologized, owned it, and appears to be on his way to making amends. Aaron Calvin did a really stupid and bad thing, was hung out to dry by the folks who helped him do it, paid for it with his job, and is foolishly continuing to dig at the bottom of the hole he finds himself in. The Des Moines Register will pay for this in mockery, loss of reputation, and in reporters wondering just what kind of outfit they are dealing with in light of the breakdowns that occurred here. The paper ought to be ashamed, if nothing else out of embarrassment, enough to make some meaningful and sweeping changes not just in how this should never happen, but in the why it happened. Then again, the people above making the underling below take the fall when they put them on the edge in the first place, despite it being their job to stop them short of it?

That isn’t new under the sun either. It is all too common.