Abomination: The Desolation of the KFC Biscuit 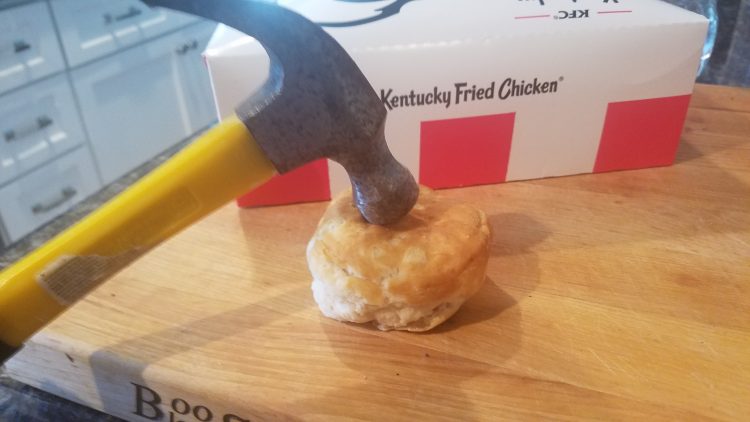 Photo by Andrew Donaldson. No hammers where hurt in the taking of this photo.

Some things boggle the mind. Occurrences in our everyday lives that defy the explanation of common sense and reason. Things that, for a lack of a better way to phrase it, make you go “hmmmm.” That make you question the order of all things, your own belief system from the inside out, that makes you checks the filters on how you view the world to make sure they aren’t adversely affecting your world view.

Such as how, in the year of our Lord 2019, can Kentucky Fried Chicken’s biscuits be so god-awful horrible.

How? How can a food icon, emblazoned with the visage of an American original and legend in Harland Sanders, proffer the culinary hockey puck that they criminally try to pass off as a biscuit? The man who not only monetized his recipe for fried chicken, but patented the method in which to make it in a rapid enough fashion to create a fast food empire, not develop the most basic staple of southern sustenance? When the Colonel sold his first franchise, it was in Salt Lake City, where operator Pete Harmon pitched the fine folks of Utah on a southern specialty. He was referring to the fried chicken of course, but biscuits went along for the ride.

But that’s the problem. In the south, a biscuit is not just a side item. It’s darn near a sacrament. In the antebellum south, and for long afterward, the biscuit was reserved for Sundays. For the working poor, the biscuit has long been both a staple and a respite, while also being a vehicle for whatever else was on hand. If you were really fortunate, jams and jellies were an option, or a piece of sausage or tenderloin. Biscuits and gravy has long been a favorite, whether that gravy was straight up, bacon/sausage fat, or for the real working class, red-eye. Fast food joints have taken the breakfast biscuit in many directions, and with food and cooking being mass media cash registers these days, making or acquiring your own great biscuit is only a Google search away.

Fellow speedy food chains Bojangles and Popeyes have excellent biscuits that folks were arguing over flaky supremacy long before the chicken sandwich debate of late. Chick-Fil-A can even manage a respectable biscuit to accompany the breakfast version of their chicken. There are scores of others.

Which returns to the base question, how in the world can the chain that flew the southern food flag first as a franchisable expansion of culinary delights screw up their biscuits so bad? The didn’t used to be this bad, or perhaps that is just the wistful memories of childhood. Granted they weren’t as good as what came out of Mamaw’s biscuit drawer, but you could get enough honey on them to enjoy it. Perhaps it is the same quality and labor issues that have plagued the fast food industry as a whole. But that doesn’t hold up with others doing it well. Did KFC as a collective just stop caring about what gets thrown in the box with the buckets, bowls, and other fixins’?

Whatever it is, it is a disgrace. Look, no one expects white linens and Michelin Stars when rolling through the Colonels on a Tuesday night. But some pride, some semblance of heritage and respect not only for a well-known brand but for the type of food getting slung out of the KFC kitchens, calls for something better than Home Depot could sell to drive nails with. We understand our grandmother isn’t back there taking two hours to make them, but can we get something with a modicum of a give-a-damn attached to it?

We aren’t asking for a reinvention of the wheel here, such as when Harlan Sanders swapped the rubber o-rings out of his pressure cooker for metal ones, enabling the pressure frying in oil of chicken. That innovation cut the cooking time significantly, allowing fried chicken to go from an all day affair in the family kitchen to a fast food item made to order. If Col. Sanders can change the world, or at least get things like “Finger lickin’ good”, “11 herbs and spices”, and “bucket of chicken” into not just in the American lexicon, but as staples of American life itself, KFC can at least innovate their sorry excuse for a biscuit.

Or has KFC ceded the biscuit to others, never to mount a challenge in the side order of choice for generations to come? If so, for shame. What would Harland think?