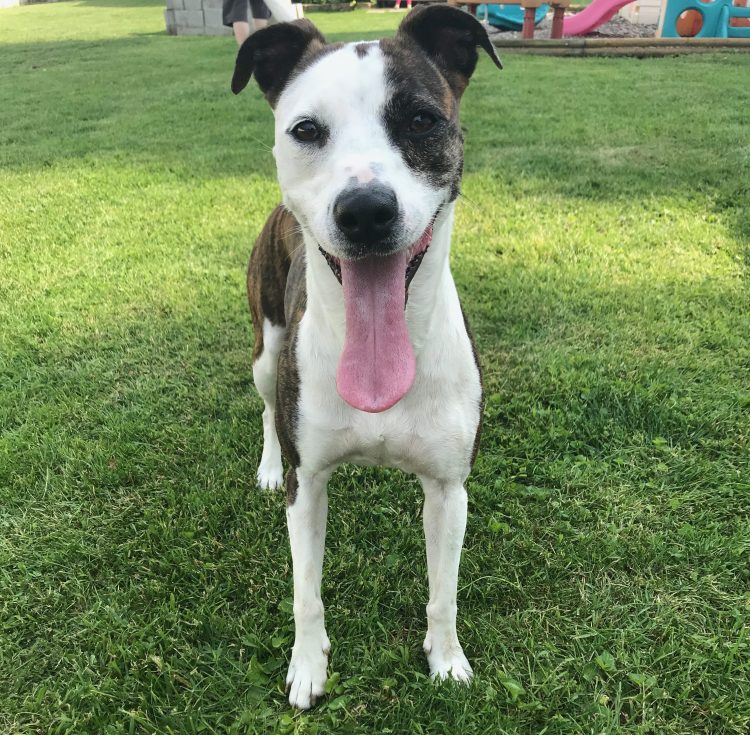 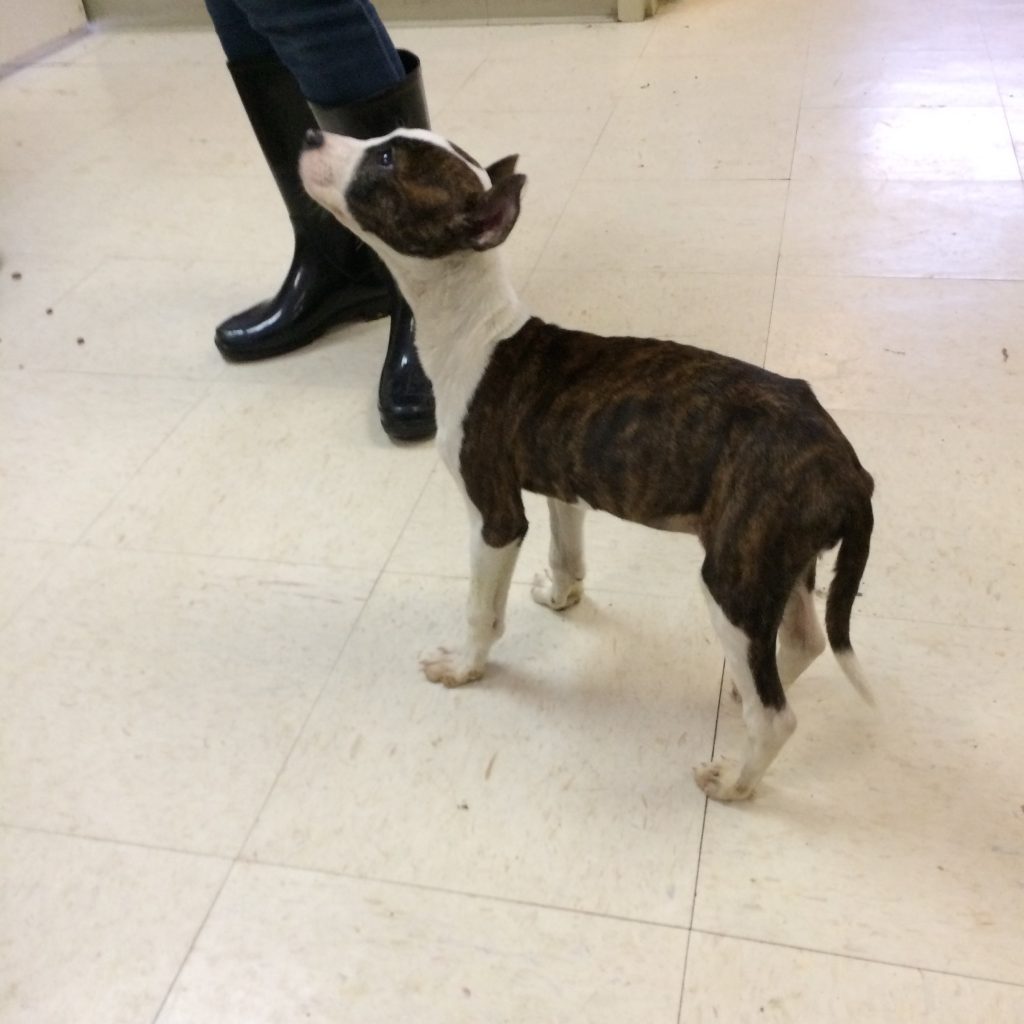 Louise the day after she was discovered.

On this day, however, the couple walked in and saw a malnourished and barely ambulatory puppy with skin stretched over her bones and a fearful look her in eye. The workers at the shelter had named her “Louise” because she was found abandoned and starving in the woods next to the K-Mart parking lot with her sister the aptly name, “Thelma.” Within seconds the woman had the puppy in her arms and the puppy was holding onto her. They estimated her age to be around 4 months. This puts her birthday somewhere in the middle of September.

The young couple decided to foster this puppy back to health so someone would adopt her and give her the life she deserved. One of the workers quietly pulled the couple to the side to say the veterinarian had given her chances at survival at ~50% due to the malnutrition. If one was to take one look at this puppy, they probably would have reached the same conclusion. A sad reality facing millions of other stray domesticated animals discarded by callous morons.

So the young couple took her home and hoped for the best, but planned for the worse. The first 48 hours were touch and go, Louise slept a lot, had many accidents, and ate like she never had before; mostly because she hadn’t really ate before. Finally, she started to show signs that she was improving, and the first indication that we had that she would pull through was when she decided to walk up to one of our dogs and start pawing and maneuvering into the so-called play position.

By the weekend, the dude was teaching her how to sit and shake and the woman would cuddle her on the couch in the evenings. It was at that time the couple started to discuss whether they had become “foster failures;” meaning that they would adopt Louise and add her to the pack. Well, in a development that should surprise no one, the young couple formally adopted Louise on Christmas Eve 2015. Also, if it weren’t obvious, the dude is me and the woman is my wife, we’re the couple. 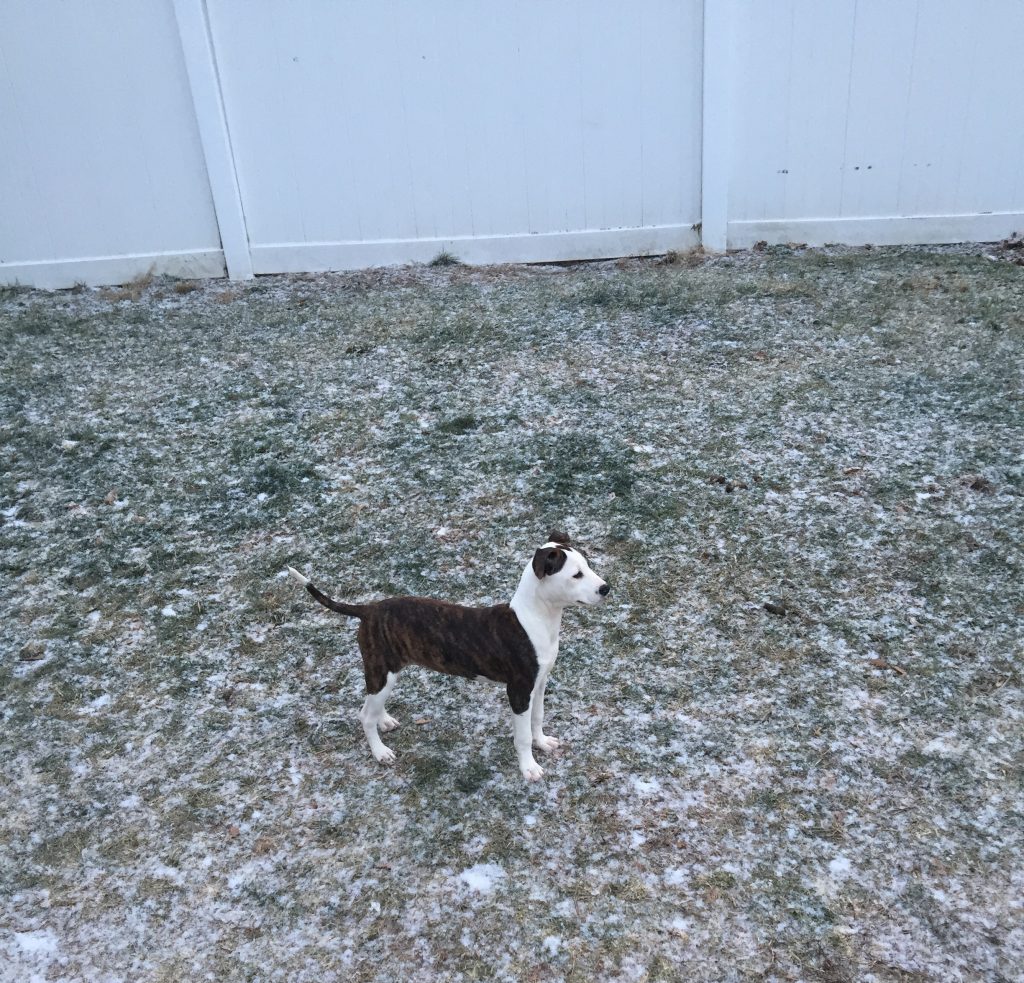 Louise, now Olive, about a month after her adoption.

We really took it on the nose from those closest to us, but ultimately, they understood that we could not just give back this wonderful dog after we had invested time and effort into nursing her back to health. We polled our family and friends as to what we should name her. We wanted to name her Isis after the Egyptian goddess and because we really liked the Bob Dylan song, but we didn’t want to have to explain to people that we weren’t terrorists and that Isis is an Egyptian goddess and a great Dylan track. So we narrowed it down to five names, Kay, Olive, Mabel, Aoife, and Flora. It was eventually narrowed further down to Mabel and Olive, and we ultimately decided on Olive because of the olive-shaped spot on the top of her head. 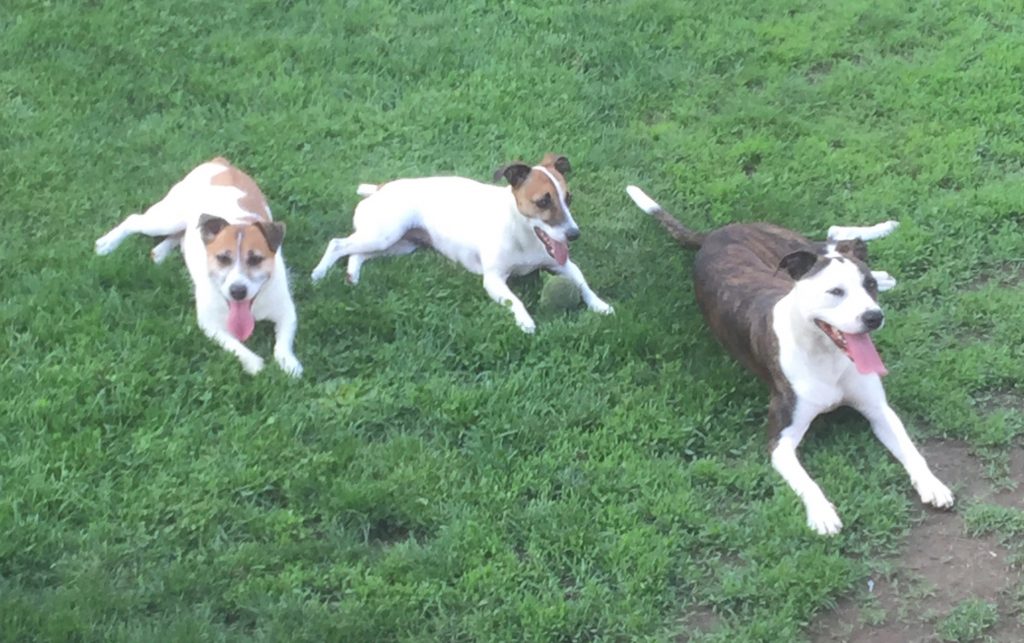 The current makeup of the pack. From L-R, Zipper, Wendy, & Olive.

Some of you might be asking, “she’s obviously not a Jack Russell and you guys had 3 at the time, why break the mold?” Well, we both noted that pretty early on and felt that it was more important to just rescue Olive. So, assuming the editors don’t throw this directly into the trash, you are all probably wondering if there is a reasoning to this walk down memory lane. Well I want to drive home the point that if you’re looking for a pet, you should always think to adopt first. There are hundreds of thousands of great dogs (and cats) in shelters that deserve good homes.

Also, I’d like to channel my inner Bob Barker and say that you should also spay and neuter your pets. The majority of shelters take care of this for you, some even do it at no cost! For some further information and statistics, follow this link. Obviously pet ownership is not for everyone and can’t be done by some due to myriad factors. If you have spare time, stop by your local shelter and volunteer. Shelters are always looking for people to walk dogs, cuddle cats, and just generally help out around the shelter.

I often wonder what would have happened to her if she was never discovered, or if she was discovered too late. She is truly a gentle and calm soul, especially when you put her next to the two Jack Russell Terrorists. So, on her 4th birthday, like each and every birthday of hers, I thank the callous moron that was too selfish to care for her and too cowardly to drop her off at a shelter so she may be given a second chance. The joke is on that person because not only did she get that second chance, but that person really missed out on a great and loving companion.