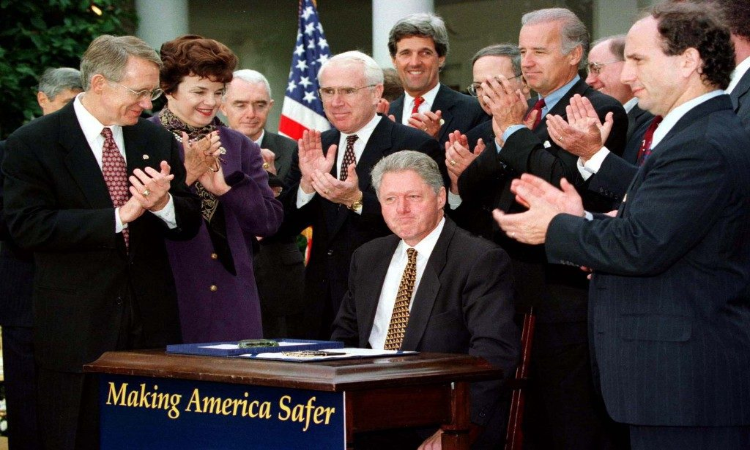 L1: This week we have been discussing criminal justice reform and the need- or lack of need- to incarcerate non-violent criminals. One complication in that discussion is the definition of “violent crime.” The “Armed Career Criminal Act” of 1984, incorporated into the 1994 Violent Crime Control and Law Enforcement Act, increased penalties for those convicted of “violent felonies”. The Act defined a violent felony as a crime punishable by more than a year in prison, “that has as an element the use, attempted use, or threatened use of physical force against the person of another;” or is “is burglary, arson, or extortion, involves use of explosives, or otherwise involves conduct that presents a serious potential risk of physical injury to another.” Thus, the Act was interpreted to apply to crimes that did not include an actual use of force, like burglary and driving under the influence.

Larry Begay was a New Mexico man with a dozen DUI convictions under his belt, most of them felonies (New Mexico classifies DUI as a felony after the third conviction.) In 2004, Begay got into an argument with his mother and sister and brandished a firearm and was arrested. He then faced federal charges for being a felon in possession of a firearm, to which Begay eventually pleaded guilty. The judge, reading the sentencing report and discovering the multiple felony convictions, determined that the risk of death or injury posed by intoxicated driving qualified these convictions as “violent felonies” under the ACCA. Accordingly, he imposed the mandatory sentence under the act, 15 years.

Begay appealed. The Supreme Court’s decision in Begay v. United States, our case of the week, was written by Justice Breyer. The Court must consider not the manner in which an offense is committed by an individual but how the law defines that offense, Breyer wrote.  This is a “categorical approach”, rather than a fact determinate approach. From the outset, the Court did not consider DUI a crime of violence, as it does not involve the use or threat of force against another in its commission.

Instead, the Court focused on the second set of factors and it’s so-called “residual clause”:  crime which “otherwise involves conduct that presents a serious potential risk of physical injury to another.” Breyer wrote that DUI was simply too unlike the other specifically listed crimes- burglary, arson, or extortion- for congress to have intended for the provision to apply.

The majority, with Justices Roberts, Stevens, Kennedy, and Ginsburg joining,  further differentiated DUI from crimes that are “purposeful, violent, and aggressive” against another. The Court also recognized that a DUI conviction does not even require criminal intent, rejecting the government’s “but everyone knows drinking causes impairment” rebuttal.

Breyer pointed out that, under the government’s theory, a person convicted of polluting a waterway would be labeled an “armed career criminal” under the Act.

Justice Scalia concurred with the majority, but disagreed with their interpretation of the residual clause, opining that congress did in fact intend to include all felony crimes which involve serious risk to others. However, Scalia did not believe that DUI fell into that category.

To make his argument, Scalia referred to his own dissent in an earlier case, James v. US. In James, the question was whether attempted burglary should be classified as a violent crime. The majority in that case formulated an analysis that required comparing the crime in question with the most analogous of the enumerated crimes (burglary, larceny, or extortion.) If the analogous crime and the crime at hand pose the same risk, then the crime is violent. Scalia quotes his dissent from James, in which he anticipated the very circumstances of the Begay case:

Unfortunately, the Court’s approach in deciding that case provided no guidance for deciding future cases that involve predicate crimes other than attempted burglary, particularly those for which there are no clear analogs among the enumerated crimes. Pointing out that problem in dissent, I anticipated this very case: “Is, for example, driving under the influence of alcohol more analogous to burglary, arson, extortion, or a crime involving use of explosives?”

In James Scalia suggested a better analysis was “first to determine which of the enumerated offenses poses the least serious risk of physical injury, and then to set that level of risk as the “serious potential risk” required by the statute.” Because Scalia believed burglary was the lease risky of the enumerated crimes, he concluded that anything less risky, such as attempted burglary, “is not covered by the residual clause.”

Finally, Scalia discussed whether DUI should be considered as posing at least as much risk as burglary. In doing so, Scalia pointed to a lack of evidence presented by the government that would prove it to be so:

Where the issue is “risk,” the annual number of injuries from an activity must be compared with the annual incidents of the activity. Otherwise drunk driving could be said to pose a more serious risk of physical harm than murder. In addition, drunk driving is a combination of two activities: (1) drinking and (2) driving. If driving alone results in injury in a certain percentage of cases, it could hardly be said that the entirety of the risk posed by drunk driving can be attributed to the combination. And finally, injuries to the drunk drivers themselves must be excluded from the calculus, because the statute counts only injuries to other persons.

Because he did not have that information, Scalia applied the “rule of lenity”, which is that an unclear or ambiguous criminal statute should be interpreted most favorably to the defendant: “But I can do no more than guess as to whether drunk driving poses a more serious risk than burglary, and I will not condemn a man to a minimum of 15 years in prison on the basis of such speculation.”

Justice Alito dissented, joined by Justices Souter and Thomas. Alito applied a strict but simplistic analysis of the statutory language, as is his way, and disagreed with Scalia’s skepticism of the risk posed by DUI:

The Court does not hold that the maximum term of imprisonment that petitioner faced on his felony DUI convictions was less than one year. Nor does the Court dispute that petitioner’s offenses involved “a serious potential risk of physical injury to another.” Ibid. The only remaining question, therefore, is whether the risk presented by petitioner’s qualifying DUI felony convictions was “serious,” i.e., “significant” or “important.” See, e.g., Webster’s Third New International Dictionary 2073 (hereinafter Webster’s); (2002) 15 Oxford English Dictionary 15 (def. 6(a)) (2d ed. 1989) (hereinafter OED). In my view, it was.

The Court’s decision changed criminal law around the country for judges who had, until then, adopted the notion of DUI as a violent crime when considering the severity of a person’s crime or criminal history.

I would point out that, in most jurisdictions, the only difference between a felony and non-felony DUI is the number of times a person has been convicted of the same in the past. A first offense is no less dangerous, and could quite conceivably be more dangerous, than a third or subsequent. It is not unreasonable to advocate harsh punishment for such offenders, but categorization as a “violent offender” is not necessarily the appropriate way to do so.

L2: Speaking of Joe Biden’s ’94 crime bill: “A 2016 analysis by the Brennan Center concluded that the 1994 bill contributed both to the subsequent decline in crime and to the doubling of the rate of imprisonment from 1994 to 2009.”

L3: Sports and social justice causes get headlines, but athletes are not just speaking out on criminal justice reform, but also putting time and money into the cause.

L4: Stupid judge becomes former judge with just a few clicks: “Kyle R. Canning became a judge in the rural town of Altona, N.Y., in January 2018. Six weeks later, he posted an image of a noose in front of a black background on his Facebook page. “IF WE WANT TO MAKE AMERICA GREAT AGAIN WE WILL HAVE TO MAKE EVIL PEOPLE FEAR PUNISHMENT AGAIN,” the post shouted in large white letters at the top of the image.”

L5: Five major law firms have joined together with 26 general counsel from prominent corporations to create a $5 million fund that will incubate ideas to combat the persistent problem of a lack of diversity and inclusion in the legal profession.

L6: Bells on bikes: Dayton may eliminate ‘ticky-tack’ law today: “It’ll be mentioned in the police report, but they don’t even bother charging because it is such a ‘ticky-tack,’ little violation,” she said.

L7: Dumb crook strategery of the week: “A woman in North Carolina called the sheriff’s department saying she was stranded without gas and food. One problem: the car wasn’t hers, police say.

L9: Good time to review the time congress tried to impeach the president. No, not that one, the first one.

L10: Witness prep is important, and cross examinations can be perilous things….