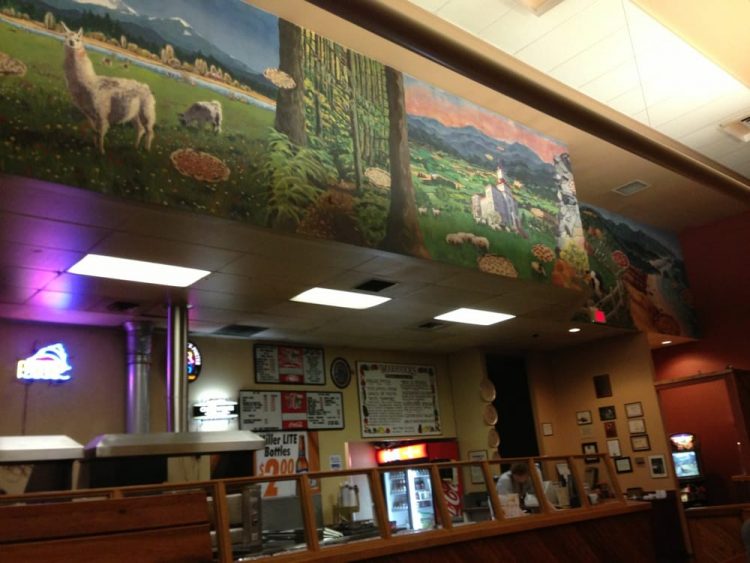 A group of high school kids gathered together in a backroom. Talking, yelling, boasting as such kids often do, I noticed that one of the girls in the group was sitting alone in a side alcove. Was she crying? I couldn’t tell, but, as a newly brave young man, I had to make sure that nothing was the matter.

“What’s wrong Adrianne? Are you OK?”

She simply looked at me and smiled. We started talking, or, rather, I started listening to her and that started the first real relationship of my life. What followed has nothing to do with our tale here, with the exception that it solidified in my brain what is truly the best pizza parlor of all time: Woodstock’s Pizza.

I thought it had always been there because in my mind, it had.  In the small, west coast college town I grew up in it was the place to get good pizza, not what was passing itself off as pie, like Shakeys or the… other places I cannot even remember the names of. I had no idea it was the second location Chuck Woodstock opened, the first also in a small college town, Corvallis Oregon in 1977. San Luis Obispo opened in 1980 when Chuck partnered with a man named Mike Chew.

Chuck and Chew, as they were called,  flew around the west coast college towns, opening pizza shops.  Next came Isla Vista (UCSB), followed by Chico, CA. This was followed by a non-college town spot, near UCSD. Then a location in Davis, not too far off of UCD. Sadly, Chuck and Chew died in a private airline crash in 1985. But, from the ashes two more restaurants were added, Santa Cruz and Pacific Beach.

Always using fresh ingredients, enough toppings to make sure that you can taste each one with every bite, sauce rolled up into the crust on the outer edges. If you went into the restaurant, a lively atmosphere with students drinking and studying, talking and laughing. A salad bar and good beers on tap. A bit of a wait if you wanted it delivered, but totally worth it for the taste, especially if you were past the point of driving.

In my little town, SLO, you would see both town and gown on any given night; there were professors with their kids, grad students with books, undergrad with their beers. It was one of the places that both sides of the community came to, as everyone enjoyed the whole wheat crust, pineapple and pepperoni, extra sauce. Or, as I enjoyed as a very poor used-bookseller, the Crazy Bread. Just a round of dough and cheese, cooked just like a pie but minus the sauce and toppings. This could be had for just a couple bucks, allowing even the poorest residents of what was quickly becoming a very expensive town, good food.

In many ways, my childhood was magical, due in no small part to the time and location that I was raised. Businesses such as this were the new normal for us, growing away from the old stogies that hung around, serving the town from the time before the college kids ruled the roost. In many towns such as this, small businesses that were truly based on the love one has to serve your customers and provide a good experience were at the forefront of the business plans, if there was an actual plan that is. And it has shown up in every Woodstock’s pizza I have eaten, up and down the best coast. But, as they say, you can never go back home, and for me and the best pizza, this holds true, as my wife does not like their pizza. Even though she grew up in one of the Woodstock’s towns, she does not like the pizza. But I live just outside of Corvallis and when I am by myself, wandering through town, I often will stop in just to restore the memories.