Making A Conversation Out of Talking Points 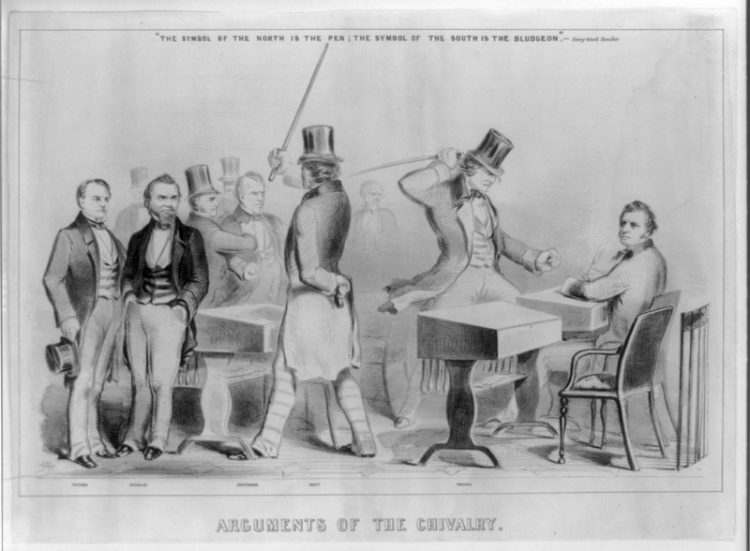 Mainstream political commentary is currently little more than trite chunks of word vomit with tenuous connections to reality. I doubt that comes as a surprise to the reader. Most people seem to have a healthy intuition that political discourse is currently a dumpster fire falling off of a derailed train speeding on its way to something out of Orwellian fiction.

This piece is about seeing past the vapid talking points, and making a conversation out of what lies beneath. There are clear culprits who have facilitated the current situation, but the operative assumption is that most readers here will be thoughtful enough to not be culprits themselves. Instead of offering reproach, this is a cathartic reflection on what has gone wrong and how one might help others see the problem.

What exactly is this problem?

More often than not, people gather their political information from talking heads who weave their word vomit into a precariously balanced narrative of some sort. No matter how poorly reality fits their narrative, the talking heads find a way to shoehorn and sell it (often with very lucrative results).

To be fair, there are some people at even the most egregious media institutions whom I admire for their contributions to political discourse. Everybody needs to make a living and sometimes writers and commentators have to take a position while plugging their nose because of where the position exists. This piece is not about those people. This is about the ubiquitous drivel that eclipses anything thoughtful. More specifically, this is about the state of things in America, though it seems like it applies in plenty of other places as well.

Word-vomitish narratives have infested the minds of folk on both sides of the political spectrum. People not only believe the word vomit, they think and deliberate in terms of it.

There are exceptions, but where there are exceptions there is also a rule. The rule here is that people have allowed half-baked narratives composed of senseless soundbites to inextricably shape how they do politics.

What are the thoughtful to do in light of such troubled political times? The answer is twofold. The first is to sketch out the phenomenon to understand its general form. The second is to decode the word vomit to parse out the underlying values which can form a meaningful conversation.

The Story of Talking-Point-Culture and Its Effects

There has to be a story about how we got here, and in this case, it’s less important that we get the literal details of the story correct than that we understand the important phenomena to see what exactly is going on. So indulge me as I tell a brief story about current political discourse

The story begins with agreeable sound bites. People hear what their itching ears desire, and they become mentally lax. In this laxity, systemic, rigorous pursuits of truth become eagerly accepted narratives. These narratives are stories that fit both reality and people’s desires just enough to seem plausible and favorable.

Eventually, narratives come into conflict with each other, resulting in an unbearably shrill feedback loop. Conservatives see Liberals spinning a narrative which contradicts the Conservative one, so Conservatives convince themselves that Liberals must be liars or something of the sort. Why else would anybody disagree with what seems so obviously true and desirable to Conservatives?

Liberals turn around and do the same to Conservatives. Both sides, having cast an entire half of the country as no good liars, need a story for why this makes sense.

The answer is simple! Liberals just hate America and love lying because they want to see the country fail. Liberals turn around and do the same thing with slight alterations. Their story usually has something to do with Conservatives lying because they hate the poor, minorities, and anybody who is not a balding upper-class white man.

With their narratives and anecdotal bits of evidence supporting them, 2019 finds each side of the political spectrum with talking points ironically different from what we might stereotypically think of as a talking point for Conservatives or Liberals.

Conservatives, convinced the no-good-commie-liberals hate America, preach a message of putting America first. Sometimes they use those words more or less verbatim. Sometimes the message takes on different verbiage. But the resounding message of Conservatism as it currently exists in America is that American prosperity needs to come first so that folks can live free, happy, prosperous lives.

The irony for Conservatives is that they are generally thought of as rugged individualists seeking personal freedom above all else.

Liberals, convinced that Conservatives just hate everyone besides themselves, currently preach a message of care and security for marginalized people. They also focus on a very specific message of personal liberty (albeit that liberty has to be of the sort sanctioned by modern Liberalism).

The irony for Liberals is that they tend to be thought of as communally-driven critters focused on the good of the collective over the good of individuals or sub-groups.

We can imagine a Conservative reader getting to this point and thinking, “Well, yeah, I favor a strong America but it is precisely so that individuals have a chance of prospering by their own dignified hard work, and America (when it is as it should be) gives them a chance to do just that! The whole point is that people can be happy and secure in a healthy society which I think America provides.”

We can plausibly imagine a liberal reader getting to this to point and thinking, “Yes, I care about individual autonomy and liberty, but I also favor a strong community where everybody has a fair chance to be happy. That’s the whole point!”

We can imagine readers accustomed to thinking in terms of narratives made out of cheap, uncharitable talking points looking at the summary just given for the opposing political viewpoint to theirs and thinking, “Whoa! Both sides want people to be happy and secure with the ability to have their basic needs met? I didn’t think the monsters over on that side of the aisle even cared!”

A Note to the Unconvinced

There also might be some stubborn reader who has made it this far thinking of that one America-hating professor Hannity featured on Fox News, or maybe another stubborn reader is thinking of Westboro Baptist or Charlottesville. With these extremes in mind, such a reader might still be convinced that this is truly a culture war against evil acting for the sake of evil, and the other side of the political spectrum is just that sort of evil.

The stubborn reader has a point. There are bigots. There are morons. There are hateful, evil people whose views are inexplicably unconcerned with what is good.

Against such people, we do indeed have an imperative to protect what is good and beautiful in this world. The reality the stubborn reader fails to acknowledge, however, is that evil is unconcerned with the political spectrum and instances of evil can be found across all parts of it. Conversely, other humans (I would suggest most of them) all across the political spectrum are in fact concerned with preserving what is good and beautiful, and that is where the conversation begins.

The central point is that while there are power-hungry tyrants in this world calling themselves both Republicans and Democrats, the vast majority of people making up one platform or the other want the same end goal – a happy, healthy, prosperous society.

The difference between the two sides is how we can make that happen, and exactly what it looks like.

Conversely, a Democrat condemning private healthcare does not want to stunt innovation or quality of service. They sincerely believe such things can be preserved under a single-payer healthcare system which would benefit people currently not provided for.

The same goes for the dissension over a multitude of issues. Do not listen to the talking points saying that dissension is just a matter of good versus evil. Listen to your fellow citizens. Understand what they value. Analyze the strengths of their position.

This is not a call to relativism. In any given debate, there are contending truth claims which cannot all be true at the same time. The point here is that we must learn to be comfortable with the idea that our neighbors have compelling reasons for their truth claims which contradict our own. Our neighbors might be wrong. We might be wrong ourselves.

If a person is as right as he or she thinks they are, they should not fear the ensuing conversation about who actually gets it right. Good citizens, good human beings, embrace that conversation.

K. William Huitt is currently a Ph.D. student in Baylor's philosophy program. He graduated from Hillsdale College in 2019 with a B.A. in philosophy and a minor in history. He then attended Western Michigan University where he completed his M.A. in philosophy in 2021. He has spoken at various Christian apologetics events and writes occasionally about religious and political issues. His personal blog is claimingnomansland.com.