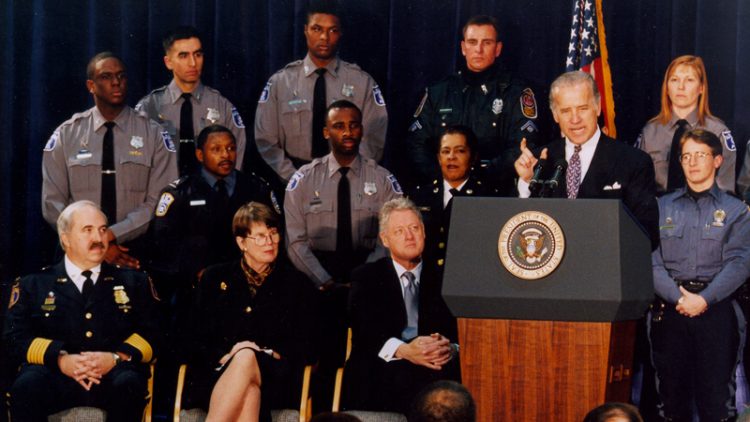 It was one of the most talked about one-liners from the most recent Democratic Primary Debate.The remark was treated like a Biden gaffe and most of the discussion online after was of the “Paul Manafort will love hearing about this” type.

Juxtaposed with this was the news that actress Felicity Huffman will serve 14 days in prison for cheating and bribing her child’s way into college in the “Varsity Blues” scandal. Many pointed out that this was rich, white lady privilege, comparing and contrasting Huffman to Tanya McDowell, the black mother in Connecticut who served five years in prison for lying about her address to enroll her son in a better school than that which he was supposed to attend.1 2

And then there was Crystal Mason, the black woman in Texas who went to prison for the crime of trying to vote at a time in which she was ineligible, due to her status as a convicted felon.

Both Mason’s and McDowell’s cases raise several issues including disparate treatment in the justice system and educational inequality that warrant their own separate essays. But there has been a push for justice reform in recent years, much of it regarding the extended incarceration for non-violent drug crime. Biden’s statement that non-violent offenders should not be in prison is not a new idea, and it is one deserving of some consideration.

So, what is a “non-violent crime”? It’s not as simple as it may sound. Some things are obvious; tax fraud, voting fraud, school admission fraud, economic or white-collar crimes in general are fairly simple to categorize as non-violent. No one inflicted physical harm on anyone else or threatened to. But what is “violence”? The Merriam-Webster’s definition is “marked by the use of usually harmful or destructive physical force.” Fair enough. A crime in which no living thing is physically harmed seems a workable definition.

Of course, in law things are not that simple. Some crimes one would not necessarily think of as violent are legally categorized as such. Burglary, for example, can be committed by entering someone’s home without permission and stealing their TV. Nobody has been physically harmed; it can be accomplished without so much as a damaged door lock when no one is home. Yet under the federal “three strikes” law, this would be considered a “violent crime” triggering the law’s application. Many states look to this rubric in their own determination of federal law; in my own state, prior to decisions by SCOTUS a decade ago3, driving under the influence was classified as a crime of violence, even if there was no wreck or injury to any person. The rationale behind the classification of these types of crimes as “violent” was recognition of the risk or likelihood that violence could occur during their commission.

But what of crimes that obviously deserve punishment, such as theft? If incarceration is not an option, how do we achieve justice and deter future offenses? Well, there are many community corrections options to consider. There is restitution, community service, drug courts, diversion programs. It may take some creative thinking, but jail does not have to be part of the equation, and certainly not years-long sentences.

No, it’s not fair for Felicity Huffman to spend two weeks in jail while Tanya McDowell received five years.  But that doesn’t mean Huffman deserved more; it means McDowell deserved less.4I don’t think McDowell’s actions should have been criminal anyway, but that’s a different article.[/evn_note] I think both cases could have been resolved by alternative means, such as community service at a struggling school. (I am not inclined to suggest monetary fines and penalties, as economic inequalities make this a problematic option as well, particularly with regard to enforcement.)

The first step may be to identify crimes which don’t necessarily need to be crimes, and then those which don’t warrant the sentences currently prescribed for them. The next step is to create a workable definition or set of criteria for when jail is an appropriate consequence. It will require a shift in our thinking about crime and punishment and some out-side-the-box brainstorming, but it’s preferable to what we are doing now.

For all of Joe Biden’s cringey comments, he is on to something here. It is unfortunate, however, that he is only now becoming enlightened on criminal justice reform. If he had adopted this stance in 1994, he may not have written the Violent Crime Control and Law Enforcement Act, which led to mass incarceration and swelled the prison population by a few million people — a large percentage of them minorities. It also stripped inmates of the ability to receive Pell grants, effectively ensuring that they could not pursue education during their incarceration and limiting their prospects for productivity upon release.

But now, Joe is right. Not all crimes are worthy of incarceration, if we can put our heads together to develop viable alternatives. As long as our society’s focus is on retribution and punishment over rehabilitation and prevention, though, his good idea is nothing more than a Biden gaffe.