Eating Pizza Outside In The Snow 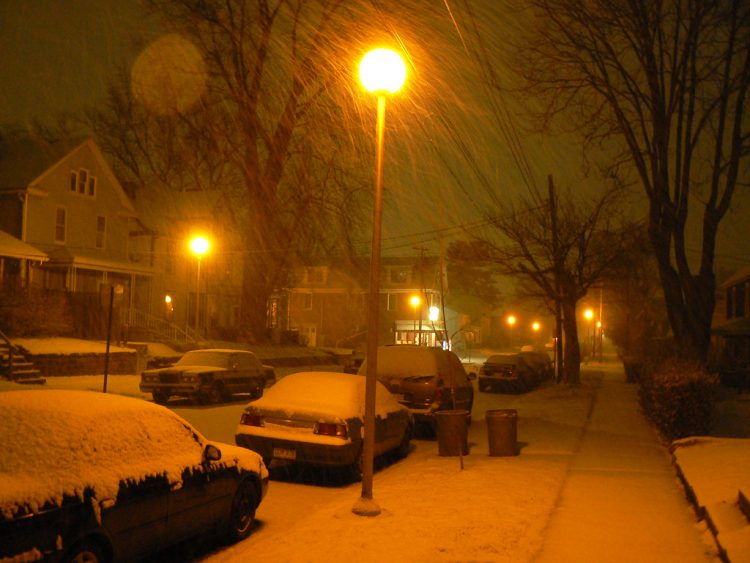 I grew up on the top of Wiles Hill, a neighborhood several hundred feet above Morgantown, West Virginia’s downtown. Our towns here are built into the sides of our hills. And because we’re far enough south – below the Mason-Dixon line, if only by a few miles – our local areas simply do not have the capacity to deal effectively with snow, particularly quickly falling snow. Snow debilitates here. A few inches can grind the place to a halt; more than that can cause serious problems until it can be cleared away.

Which means it was on a hope and a prayer that a buddy I called Casa D’Amici for a pizza on a snowy Saturday night in the later 1990s. It was closer to midnight. The area’s chain pizza joints had long-since closed for the night. We weren’t in a position to drive anywhere; our parents would have killed us, assuming we hadn’t killed ourselves trying to navigate our way to anywhere.

The snow had been falling for hours by that point. There was enough snow that we were trying to figure out if it was possible that school would be canceled 36 hours later. But we called anyway.

“But up Wiles Hill?”

My buddy and I waited, sitting on the porch, talking about whatever dumb teenagers talk about: video games or books or girls or whatever. It was a beautiful night. When I had been younger, I went on walks with my parents. They took me out all the time, including on snowy cold nights. I remember loving the look of snowflakes curling through the streetlight. That never changed.

No cars came by. We imagined that the attempt had been made but then abandoned. And then, at the top of the street, through the snow, two headlights. And then the car itself, sliding down the street, turning onto the sidestreet that went up beside my parents’ house, skidding to a stop.

“I can’t believe you made it.”

“Take it all,” we said, shoving twenty bucks into his hand, giving him as big a tip as we could for even reaching us, much less with a pizza. Which was still hot. That alone was miraculous. But then there was the pizza itself. The driver slid away, back out into the night, maybe to make more deliveries, maybe to creep his way back downtown.

Morgantown had always been bifurcated between thin-crust pizza joints – most notably, Pizzeria Italia’s pizzas, often covered with what seemed to be the bare minimum of sauce and cheese, often made paper-thin, as if the crust having risen even a whiff would have cost its owners money – versus deeper-crusted chain offerings, like the pan pizzas from Pizza Hut or Dominos. Casa D’Amici sold thin-crust pizzas too, but its crusts could at least occasionally achieve a sort of middle ground between the gossamer offerings from Pizzeria Italia and the chain’s pan-pizzas.

Between the dough, the sauce, and the cheese, the pizza managed to be maybe an inch thick. The ride in the car had not damaged anything. We ate the pizza with “Ooohs!” and “Aaaahs!” as we took bites that burned our mouth, all while snow hit us in the face, blowing sideways under the roof of the front-porch I’d had to paint every few summers. The pizza was gone within minutes, and we retreated inside for the night.

My father gawked the next morning at the idea that anybody had delivered a pizza in a snowstorm on unplowed city roads.

“I can’t,” he said, miffed that there were no leftovers, although no doubt appreciative that his son’s capacity to eat matched his own. He had never been there before. “How was it anyway?”