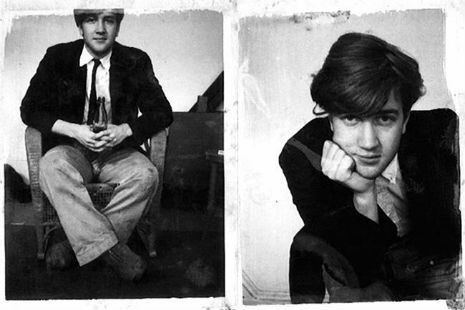 Years ago, when I was doing research in Marseille, I came upon a strange postcard, which I bought intending to send it home to my wife: it had a photograph of a wall mural in which an old-timey movie director was behind a camera shooting a starlet whose face had cracked off the plaster. I kept it in my bag for months, forgetting time and again to send it home. Finally, I decided, in Paris, to find a post office and mail the damn thing. But, on my way there, I was distracted by a sign indicating the basement bookstore near my mansard apartment that was having a free talk by David Lynch in about twenty minutes- exactly the sort of thing that happens in Paris- and, looking down, I realized the director on the postcard looked just like him!

So, in I went, and bought a copy of Lynch’s book and stood in this little bookstore filled with bored and annoyed Parisians (or is that redundant?) while Lynch talked at great length about transcendental meditation, one of the few “causes” we can really associate with him. Finally, the talk ended and Lynch signed books and whatnot and I had the chance to give him the postcard and explain briefly how I’d gotten it and was about to mail it when I realized “That’s you!”

“Oh, wow!” Lynch said, “Golly, can I have this?” I nodded, gulped nervously, and left while he thanked me kindly.

His manner was, as Mel Brooks put it, like “Jimmy Stewart from Mars”. Lynch, in fact, grew up in various parts of the Unites States, having particularly vivid memories of Boise, Idaho, and a certain flavor of Midwestern grotesquerie runs through many of his films. In the fantastic documentary “David Lynch: The Art Life”, which the Criterion Channel recently featured, Lynch recalls Boise as blue skies and green grass and cheerful people. It is, therefore, all the more jarring when sexuality or violence erupt into that world, as when a naked woman wandered into the street on evening while the boys were playing, sat down on the curb, and began crying. The filmmakers illustrate this event with one of Lynch’s assemblage paintings, but they could have easily used the identical scene in Lynch’s Blue Velvet, one of the truly great films of the 1980s, and one that clearly drew from the director’s childhood.

But here’s the wonderful thing about this documentary: if you only watched the first two-thirds of it, you would have no idea that Lynch is a film director in addition to being a painter. The film focuses primarily on his early life and almost entirely on how he became a painter. It’s only towards the end, when the young art student begins experimenting with “moving sculptures” and films some shorts and then finally wins a scholarship to AFI Conservatory that we start getting hints of his subsequent film career. The documentary ends with his joy at creating his own deeply disturbing world with his student film Eraserhead and says nothing about its release, midnight screenings, and all that came after that. Instead, we listen to Lynch talking about how the darkness entered his life when his family moved to Alexandria, Virginia (I get that- I’ve been there), and how art saved him, the importance of the book The Art Spirit by Robert Henri, and his own conception of “the art life”: smoking, drinking black coffee, and painting all day long basically. At one point, his parents tried to dissuade him from making such disturbing art, or having children given his art, or sticking with his dream of film, but Lynch has no bitterness towards them; he simply had to make art regardless.

I’ve been thinking for a while about one of David Lynch’s “failures”, the film Twin Peaks: Fire Walk with Me, which is an interesting example of a work of art that was deemed a disappointment and later reassessed as something almost the opposite, a “secret success”, to borrow the Onion AV Club’s term. It was last year that I started noticing talk about new screenings of the film, a push by the Criterion Channel, articles about how the film makes more sense in the era of “me too”, and a general sense that the critics had missed the boat the first time around. Personally, I remembered Fire Walk with Me as one of Lynch’s midrange works- not as great as Blue Velvet, but certainly better than Inland Empire. For me, the underappreciated masterpiece is Lost Highway.

But when Fire Walk With Me was released in 1992, it was met with critical derision and failed at the box office. Intended as a prequel to the television series, fans of the program felt the tone was too dark and there was too little of Kyle MacLachlan, whose Agent Cooper character was the star of the series. Also, there was a general sense that the series had declined in quality between the first and second seasons, partly why MacLachlan was hesitant to appear in the film at all. People loved the series for its small town surrealism and talk about pie and coffee and the film is bleak and violent. It seemed like a nadir.

So the response was baaad. Quentin Tarantino (who has plenty of room to talk on this count) said he felt that “David Lynch had disappeared so far up his own ass that I have no desire to see another David Lynch movie until I hear something different.” Vincent Camby said “It’s not the worst movie ever made; it just seems to be.” Rita Kempley said it was both “perversely moving” and “profoundly self-indulgent.”

This word “self-indulgent” comes up a lot in the 90s reviews. It’s a fairly tricky critique when applied to art; the general sense is that art which is self-indulgent lacks a certain amount of control and is obscure or unappealing to anyone but the artist. And Lynch has been accused of both failings, repeatedly. But, after you’ve watched his body of work, you realize that there’s absolutely nothing uncontrolled about any of his images. He’s an abnormally controlled filmmaker. As for the “obscurity” of certain scenes or ideas, well, yes, but Lynch intentionally leaves some story elements obscure in every film he makes.

I think the real criticism of the film was summed up by the reviews that called it grotesque and morbid. The show was a murder mystery about a pretty and popular teenage girl whose body is discovered washed up on the banks of a river in a small town in the Pacific Northwest. By the midpoint of the second season, the mystery “Who killed Laura Palmer?” was basically solved, which was probably a mistake. The film then details the last doomed days of the young woman’s life. (I suppose you should stop reading now if you have yet to watch the series or the film)

There’s no sensitive way to say that the film is really about a victim of incest and assault trying to keep her sanity together while her father fights his own demons, in this case a literal (or maybe not) demon. It ends with the father killing the daughter. It’s hard, if not impossible, to imagine that story ever being a box office success. And, in that case, I think the film would be “self-indulgent” if it was an exploitative or insensitive depiction of the story. But it is not. It’s grim and real and painful. The Palmer family tragedy, as depicted by Sheryl Lee and Ray Wise, is absolutely devastating. It’s also psychologically nuanced and profound. Laura is erratic, self-destructive, and numb- and the victim of an unspeakable horror. Lee’s performance is brilliant.

The film has its flaws, but all of the opprobrium it received in 1992 reads as over-the-top and wrongheaded today. I think the material was too dark and the context of the television program led viewers to expect something very different. And reviewers tend to move in a herd- as a group, they were outraged that Lynch made something at odds with their expectations.

Similarly, the “reassessment” of the film as an overlooked “masterpiece” seems a bit of an overcorrection. Here, again, context matters- the recently aired “third season” puts the film into a different context in the series- it seems much more pivotal in the overall story. And, in the era of “me too”, we’re likely more ready to hear a victim’s story. Again, the film has it’s flaws. But it’s possible that we need to wait years before we try to assess works of art. The Art Life makes it clear that David Lynch has been following his instincts and stayed true to his vision for decades now, and perhaps with such artists we, as well, should trust their vision.

So, what are YOU watching, reading, pondering, playing, or creating this weekend?