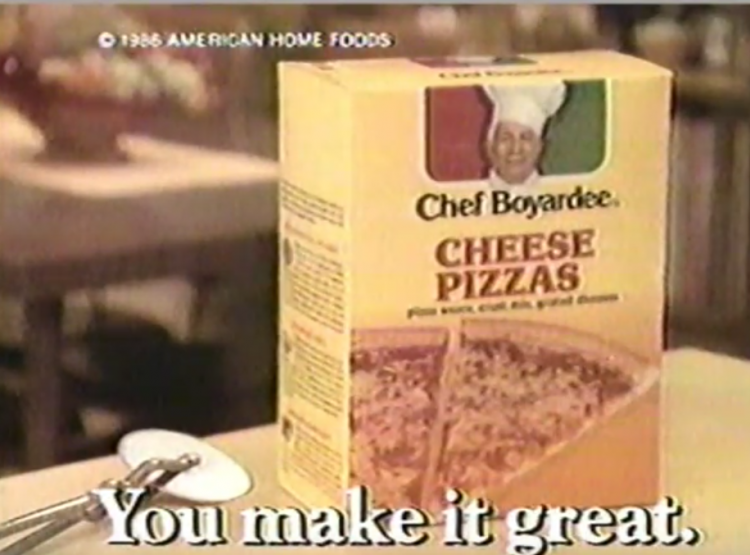 I was a kid who grew up in a town without a pizza joint. It was the 1970s, and it was a small, slightly-snobby northeastern Ohio town (you should have seen the fight people put up when a McDonald’s moved in in the 1980s, about the color scheme of the place and litter and “attracting groups of teens”). I think I was about eight or nine before the first pizza place – called Pizza Bazaar, but better known to the witty children in my middle school as “Bizarre Pizza” – opened. So before that, we had homemade pizza.

Pizza that came in a box mix. Specifically, Chef Boyardee.

Ettore (Hector) Boiardi, the real man behind the brand, was a genuine chef from Italy who moved to New York City in 1914, and from there, to the famous Greenbrier resort in West Virginia. Eventually, he opened his own restaurant in Cleveland (not very far from the town where I grew up). Boiardi (with a slight name-change to make his name more pronounceable by Americans) first marketed ready-made canned pasta meals in the late 1930s; in World War II, some of his products fed the US military. By the time I made the scene in the 1970s, he was a market force.

The pizza kits – I remember just the “plain” kind, though later there was a more-deluxe one with pepperoni in the sauce – were a fixture at the local Acme grocery store. The kits came in a box with a large paper envelope of crust mix, a tall narrow can of sauce, and (if I remember correctly) a little can of powdered cheese to go on the top. We never used the powdered cheese; my mom was a home cook and she believed that “real” cheese, mozzarella shredded from the ball in which it was sold, was the proper cheese to top it. Sometimes she got very fancy and put either pepperoni (from the deli counter) or browned sausage on top. (And for the “half” reserved for her and my father, peppers and onions. Neither my brother nor I would touch those, and we complained that they “polluted” the rest of the pizza.

The cheese powder (it was like that grated Parmesan stuff) sometimes got put on popcorn instead.

I remember the pizzas as being made on cookie sheets – the dough stretched very thin, maybe thinner than what the mix actually called for – and then topped with a thin layer of sauce. It was baked for the requisite fifteen or so minutes, then the cheese added and allowed to melt. And the whole thing, after it was done, was cut into fat rectangles, and you could either get a corner piece (if you liked the crusty part) or a side piece (if you didn’t like it so much); there was no refusing to eat what kids now call “pizza bones” in my household growing up.

It was a treat but also an easy supper. I remember it sometimes being Saturday-night fare, especially after a day spent hiking or working in the garden or similar pursuits. Thinking of it now reminds me of the kitchen we had in those days – the blue and white wallpaper that was an imitation of Delft tiles, the pale-blue wall-mounted rotary phone, kitchen cabinets that had that weird finish that would turn kind of tacky in the humidity of summer. Some years there was her sewing machine off in the corner, and a metal cabinet with a small black-and-white television on it – which we used in the morning to watch the old Del and Tom show (a morning “news” program that was more banter than news) from one of the Cleveland stations.

Chef Boyardee meant home and mom’s cooking and family being together. It meant good things. It WAS one of the Good Things, in a childhood that had a number of Bad Things in it for me. It was familiar and reliable and comfortable.

Eventually, Pizza Bazaar was joined by a Noble Roman’s, and we started going there for pizza – often on Sundays after church. But still, sometimes we made Chef Boyardee. Because it was easy, it was inexpensive, it meant not rounding everyone up and going out. And I remember we made it a few times at Grandma’s – who lived in an even smaller town that had no pizzeria at all. (One year when we visited her oven was broken, and my mom figured out how to make us all mini-pizzas using a covered electric frying pan as a sort of miniature oven! My mom was and is a brilliant cook and good problem-solver).

Eventually, I went off to college, and then to a place of my own. Once in a while I made Chef Boyardee for old times’ sake, but at some point I stopped. And then came a diagnosis of hypertension where I spent several years religiously avoiding salt. In my older age (I turned 50 this year), I’ve gotten a bit more lax and do allow myself the occasional indulgence.

I also lost my father recently. So I find myself dealing with waves of nostalgia, and even though you really can’t go home again, part of me keeps trying. So one day at the store, I saw canned Chef Boyardee pizza sauce. And I bought it, thinking “some night I’ll have Nostalgia Pizza.”

I made it the other night. Note that it wasn’t one of the kits with the crust mix included; usually if I am bothering to make pizza I make crust and sauce from scratch, or, failing that, use Jiffy mix and Muir Glen. But this time I used a different mix brand – which was disappointing – and the can of Chef.

Upon opening it, I felt a wave of disappointment: a plain, uniform, watery red, with a slick of oil on the top. I experimentally poked a finger in and licked my finger.

Proust’s madeleine it was not. “This doesn’t taste like my childhood” was my main thought. I soldiered on though, dumping some of the sauce on the parbaked crust. Again, it was distressingly watery. And my taste-test showed it was bland, so I added an Italian herb and spice mix I had. I baked it up, added mozzarella – just as my mother would have done – and ate some.

It wasn’t terrible. I’ve had frozen pizza that was far worse. But it wasn’t the brief Return to the Garden (of my childhood) I had hoped for. The sauce was bland and tinny; the fact that they put microscopic particles of cheese (apparently, it’s listed on the ingredients) in it didn’t add anything good. All in all, it was a disappointment. It didn’t taste like I remembered Chef Boyardee pizza tasting.

And I was left wondering: has my palate become that jaded? Can I no longer enjoy the simple sweet-fat-salt foods I did when I was a child?

Or was it Chef who changed?

I guess I’ll never know for sure.

(The Chef Boyardee Company was sold to American Home Foods in 1946; they became International Home Foods in 1996 and were later sold to ConAgra. I am not discounting the possibility that the formulation of the sauce has been changed since I was a child….)

Botany and ecology professor at a small university in the Great Plains,. Frustrated pianist. Interested in too many non-academic things.