The Democratic Debate: Houston Has Problems, Plans, and Candidates for President 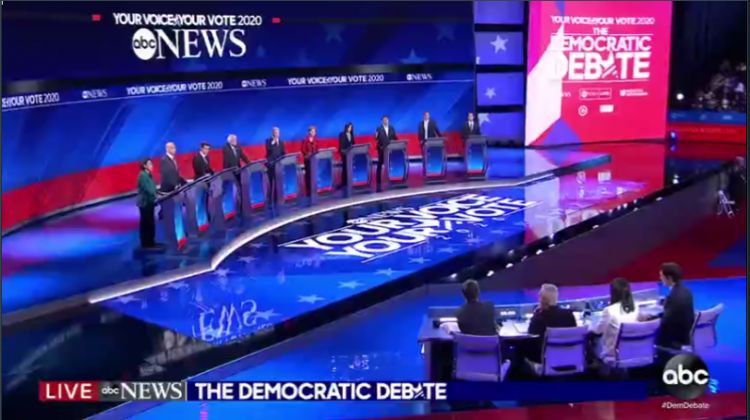 The Democratic Debate on ABC

Format wise, the DNC clearly did the right thing by cutting the field. It would have been even better if they had cut it even further, but baby steps, I suppose. That meant an increase in time for each candidate, but that increased time did not always work out. There were a lot of rambling, wordy word answers. The trademark time overruns were prevalent, to the point that even Joe Biden, derided in previous debates for stopping mid-sentence when time ran out, remarked he was now going to take extra time cause everyone else was.

The headlines leading into the debate of “Warren and Biden on the same stage for the first time” never really materialized. Some of that was the Senator from Massachusetts declining to directly attack the front runner, but to be fair she didn’t have much opening to while others were already doing it. Bernie Sanders held that distinction, using his normal style but impaired with a scratchy voice to point out the differences in him and the former vice president. It was illustrative of the problem Elizabeth Warren is having in general; with so much overlap in her and Bernie Sanders’ beliefs and supporters, the one is limiting the other’s ability to climb Mt Biden to the top. Sanders isn’t growing his support but isn’t going away, either. Warren did fine here, but also disappeared for long stretches. “Fine” isn’t going to cut it when you are trailing and chasing, though it might work out if Joe Biden’s poll numbers get as loose as his teeth did during the debate. Also something to watch if Senator Warren is the nominee: she hasn’t been pushed or challenged on anything in these debates, by candidates or moderators. If you are a Warren supporter, that should worry you; you do not want the first time your candidate takes a punch and has to respond to it to be on stage with Donald Trump, not having answers honed and ready

The plus side for Sanders and Warren is that the front runner is Joe Biden, who is prone to doing Joe Biden-type things. There were some straight up gaffes (“Non-violent criminals shouldn’t be in jail” will be music to Paul Manafort’s ears) along with outright bizarre (a question about Biden’s own quote from the 70s on slavery that meandered into — what is sure to be mocking about — a record player of all things) and plenty of barely coherent word salad in between. There were many spots where Joe Biden looked old, confused, and out of it. There were several times where Joe Biden was fiery, passionate, and direct in his responses. In total it was probably his best performance, which isn’t saying much, but he can relate and emote on a personal level better than anyone else on stage. He didn’t lose on anything that isn’t already baked into the Joe Biden experience, so call it a win for Team Inertia.

The top three probably won’t change a whole lot. Warren should gain a few points, but other than that it’s hard to see much substantial change coming from this round. Everyone mostly came off well enough, with a few exceptions. Julian Castro went there with Joe Biden, but his bringing up Joe’s memory while getting the quote he was using to make the attack wrong just comes off looking bushleague. It did not go over well with a large part of the audience, commentators, or on social media, as many felt him repeating the “forget” line 4 times came off poorly for him. To point, the last three major attack lines that came from the debates were Kamala Harris on Biden (that was the “I was that little girl” line – didn’t help her at all), Cory Booker on Biden (“Kool-aid” – didn’t help him at all) and Tulsi Gabbard on Harris (hurt Harris, and Gabbard isn’t on stage now). Yang spent his precious time of an opening statement with the gimmicky raffle announcement that was so ridiculous it even managed to strike the normally loquacious and articulate Pete Buttigieg speechless for nearly a full minute. Kamala Harris had a very shaky night when she couldn’t afford one, and with every good moment she had offset by most of her dozen or so canned one-liners falling flat, including a bizarre and cringey “Yes, we can” to Joe Biden she couldn’t delivery with a straight face, turning and giggling as she did so. Booker had a nice debate, but nothing that would jump-start his moribund campaign. Amy Klobuchar was perfectly fine in the few times she spoke, other that that eye-rolling “Houston, we have a problem,” line, but like Booker nothing occurred that changes her trajectory. Pete Buttigieg was fine and continues to bank fundraising money for whatever office the Mayor of South Bend will be pursuing next.

Then there is Beto O’Rourke.

Because of the attention he received in this debate, and the praise of his fellow candidates, and the moment of talking about issues in light of one of the recent mass shootings being in his hometown of El Paso, the former representative was set up to have a good night. Which on the surface he did, getting off the “Hell yes, we are going to take your AR-15” one-liner that thrilled the crowd. Of course the applause had not yet stopped when his campaign started offering t-shirts with the pre-planned line emblazoned on them for sale at the low, low price of $30.00. Beto will also have a great talking point going into tomorrow, when something called a Briscoe Cain idiotically rose to the bait with a stupid tweet Twitter later removed and O’Rouke retweeted as “a death threat.” Just to make sure the point was driven home by Team Beto, his social media also sent out this piece of subtlety.

That is the surface. The reality is with the “Warren vs Biden” matchup not really happening as advertised, and Bernie being Bernie but with a scratchy throat, the sizzle reels for the talking head shows are going to need something to cover other than Biden’s gaffes and word salad. So Beto will eat up plenty of air time over the next few days, and with his characteristic lack of self-awareness will not realize why. His opponents felt free to praise him, because he is no threat to any of them whatsoever. Now a also-ran candidate that in some polls is behind Andrew Yang, he has the freedom to say the quiet part out loud and call for full-bore gun confiscation, whereas the folks who actually want to inhabit the White House have the good sense to not cross that Rubicon. There are gun reform proposals that have polling support, but outright confiscation – whether hedged as a “buy-back” or not – isn’t one of them. O’Rourke is probably happy to have some positive press finally, so he doesn’t notice the praise is actually a head pat for doing the dirty work the other, more viable candidates, probably would like to do but won’t. Will it help him in the polls? Maybe, a little, for a little while. What it also did is make him unelectable in the state of Texas for any statewide race. That praise from the stage amounted to “Thanks for saying what we can’t, to your own detriment.” Lots of attention, but nothing will come of it.

Which is probably the theme of the evening. Not much will change. The overriding themes of “is Joe Biden up for this” contrasted with the voters who are holding onto the former VP after months of the more progressive Warren and Sanders not convincing them in significant numbers to come on over remains- questions that will probably go unanswered till we do it again in Ohio in October.