Little Cups of Grease and Other Reasons to Love This Pizza 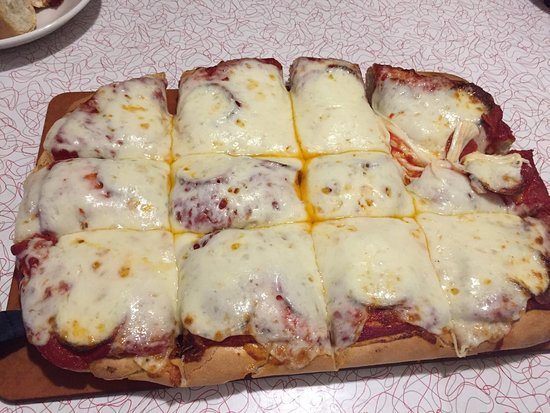 My state is famous for pepperoni rolls. They are big, soft bread rolls baked with ample slices, sticks, or ground up pepperoni inside, sometimes with cheese, sometimes with hot peppers. Like much in West Virginia, they have their origins in the coal mines. In the northern part of the state, where I’m from, there were a lot of Italian immigrants working in the mines. The pepperoni roll was created by their Italian wives as a convenient lunch staple to take underground. Because they are delicious, they became popular and there are, to this day, several very old family-owned bakeries and restaurants in that area serving these delicious, doughy bundles of grease. One of these was Colasessano’s.  Founded in 1950 by Filippo and Filomena Colasessano, they served a variation, called a pepperoni bun: a soft baked hoagie roll, split open at the top and filled with a pepperoni-laden sauce and a ton of provolone, and toasted. But this is not a pepperoni roll/bun symposium, so I will tell you instead about their other amazing offering: the Colasessano’s Pizza.

It was a Sicilian style pizza: a thick, chewy crust, crispy on the bottom, baked in a large rectangle and cut into squares. I do not abide any “thin crust” nonsense, and I have learned to make do with “regular” crust and pan pizzas. But nothing is as good as a thick, perfectly baked, rectangular crust Sicilian, absolutely slathered in delicious sauce, completely covered in a thick layer of mozzarella. And Colasessano’s used ample amounts of what I believe was the best pepperoni ever. The pepperoni was in small round slices, maybe slightly larger than a quarter. You know, the kind that, when cooked, curls up at the edges and makes a crispy little cup of grease. The sauce was just enough, generous but not sloppy, with a delicious tartness befitting its homemade origin.

When I was growing up, Colasessano’s was a take out place on the other side of town. We would rarely waste gas to drive that far, so I probably ate a fresh-from-the-restaurant Colasessano’s pizza twice in my life. But fortunately, their pizzas were so popular that they could be purchased frozen in all the local grocery stores and convenience stores for about five dollars. But this was no DiGiorno style frozen pizza; it came in a heavy, thick cardboard box. Inside was the frozen crust, covered only in sauce and parbaked; a bag of pepperoni; and a bag of shredded mozzarella. First, you cooked the crust for a while. Then, you added the little pepperonis, of which you were provided more than enough for edge-to-edge coverage, and baked a bit longer. Then, you take the cheese, which is slightly frozen, and crumble it over the top of it all. You can completely cover the pizza so that no sauce even shows through, and have some left over. Pop it back into the oven for a few more minutes to melt and voila. As good as if you had picked it up from their shop.

You need a good-serrated breadknife to cut through the thick crust; no mere rolling style pizza cutter will do the job. All of this is very much worth the effort.  When I went to my hometown, I would usually grab one of those big, heavy cardboard boxes from the freezer section to take home, though it no longer costs only $5. And a few years ago, I found myself very disappointed when I opened one up to bake it and found not a bag of those delicious little quarter-size pepperonis, but a bag of Hormel.

Oh, well. Nothing lasts forever, you can’t go home again, yadda yadda yadda. And even without the little cups of grease, it’s still the best crust and the most generous topping of cheese of any pizza I’ve ever had, and the sauce seems not to have changed. If you’re curious, they will ship.

Now, they have a sit-down restaurant and a full Italian menu, but I couldn’t tell you whether that food is any good. I don’t really want to know about anything but their pepperoni buns and the pizza.

Which, come to think of it, I haven’t had in a while. It just so happens I’ll be up there this weekend, so perhaps I’ll grab one. I’ll be sure and let you all know whether it still lives up to my memories.