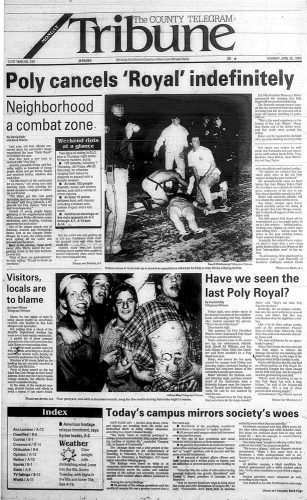 The mob swarmed around my car, bumping and pushing against it. Hands slapped the windows harder and harder as others started to rock the Toyota on its hinges. The shouts of “FREE BEER!!” were being drowned out by the new sounds of “FREE PIZZA!!!” as more and more people moved toward me. I kept a 15″ Cresent wench under my front seat in case of emergencies, but this was well past the point of its use. If I rolled down the windows even a hair, fingers would be inserted to try to pull the doors open.

I don’t even remember if I had any pizza left in my car at this point. But I did, however, have the sign atop my roof, showing all that I was in the business of food delivery. Someone, a student or perhaps someone in town just for the party, jumped (fell?) onto my hood and knocked me out of my paralysis. I slipped the Corrola into first gear, started to let out the clutch and slowly moved forward, pushing people out of the way. I don’t think I ran anyone over (later police and news reports don’t mention anyone having suffered that) and I am not sure if I would have cared at that moment. The drunken crowd was acting as one, thoughtless and violent, seeking destruction for all that denied them immediate gratification. As that mass of bodies started to feel that I was not going to be stopped and my speed began to increase, the crowd parted like the sea, and I was able to break out of the mass. I quickly sped out into the areas of the street that had no people milling and chanting around, taking a circuitous route back to the shop.

California Polytechnic, San Luis Obispo, affectionately known as CalPoly, or just Poly by the locals, was founded in 1903 when the town convinced the rest of the state that a new college was needed to both serve the area between the two major population centers of Los Angeles and San Fransisco along with the states growing population and that they were perfectly situated between them along Californias Central Coast. Praised by Theodor Roosevelt for the courage to work at expanding education, the university spent its first decades working to make this a viable institute of higher learning. By the ’30s they were proud enough of their achievements to open the doors to the community and show off its accomplishments.

“A County Fair on Campus” they called it, a giant open house to showcase the school. Tractor pulls, a rodeo, all of the colleges putting on displays of intellectual prowess. And Poly Royal was born. Fluctuating between a day-long activity and weekend-long programs, the towns business community began to rely on the millions of dollars that the event brought in. And along with those dollars came people, 100,000 at the time the events of this piece took place. This greatly overwhelmed the sleepy little town of 40,000, not to mention its police department.

As children attending the grade school across the street from campus, we walked hand-in-hand to the fair as a class, excited to see the exhibits that our parents helped usher into the world. In junior high, we were excused early to attend, and spent our time in Kennedy Library’s basement, looking up old Playboys on microfiche. By the time high school let us out, we wandered around looking for a place to smoke pot, in order to see the screening of Top Gun in a Marijuana haze. And in the first year or two of college, we eagerly awaited those parties swirling about the areas of town dedicated to student living.

On that night of Friday, the 27th of April, 1990, I was delivering pizza for Dominos, as that paid the best. You made minimum wage, a dollar per delivery and all the tips you could rake in. And on that night, it was a going to be a lot. All hands on deck, either you were running pies out the door by the dozens, or you were on the line, making as many custom orders as came down. You answered the phone non-stop, trying to get the increasingly drunk orderers to make sense of what they wanted, or, in default, you said “pepperoni and cheese? Sure, no problem, whats you address and phone number?” Half the time when you arrived the orderer was nowhere to be found, but someone would buy the pizza anyway, usually just by handing you a twenty and saying “just keep the rest.”

I was out, running the pizzas to the callers, my back pocket stuffed with cash from tips. As the night wore on, more and more people were out in the streets, drinks and smokes in their hands, often yelling at me to stop, give them rides or to try and buy a pizza. Having to dodge more and more pedestrians on the major streets running through the student living sections of town, I often took little short cuts on side streets. This would sometimes lead me to go past some of the students’ favorite spots.

The majority of off-campus living was centered at the junction and vicinity of Foothill and California streets. The proximity to campus was a plus, not to mention living with other students in a student-focused area, this was party central. You could be as loud as you wanted on this night, walk around drunk from party to party, and for the most part, the police would cast a blind eye. And the place you got all that booze? Among others, Campus Bottle Shoppe – Liquor, Beer, Wine, Kegs. Ground Zero. The corner of Foothill and Hathaway. Right in the student section.

But they started running out of beer, keg or otherwise. The number of people who had shown up for Party Royal, as it was known to the kids from Chico to Santa Barbara, drew many more people than expected that year, and they were thirsty. Revelers were out and about, looking for more drink and more excitement, about one thousand of them according to the police. This is when I inadvertently came around the corner and came directly into that press of bodies. Slamming on my brakes, the pizza delivery sign on my rooftop, the crowd surrounded me.

As I pushed my way out, things came to a head; the angry mob broke the store’s windows with a dislodged stop sign and began hurling beer bottles at the store’s employees, who returned fire with full champagne bottles being thrown to keep the angry crowd at bay. Often referred to as the Bottle War, the store was surrounded, the employees had nowhere to go, and it took the authorities over 30 minutes to get there.

When I return to the shop, I was not the last driver to make it back, but near enough. We shut down deliveries for the rest of the night, while we all stayed at the store. The rioting began to move closer to us, even though we were about a mile or two up the road. The police and sheriff deputies were called in from the rest of the county and neighboring Santa Barbara county. And by 2 am, things were mostly under control.

All told, around 1,000 people were involved in the riots before being dispersed by tear gas and high-pressure water cannons. Thirty people were arrested, only half of them actual Poly students. Over a dozen policemen and deputies were injured, at least $100,000  in damage was caused. I have strong memories of a motorcycle, burned, chained to one of the palm trees that line California Blvd. No one knows how many people were injured, but we do know that the festival, a showcase of the best that the students of a proud and well-regarded university can do, a school whose motto is “Learn By Doing” was canceled for the next several years. The 58-year tradition ended.

I may have hurt some people that night. I have no way of knowing what, if any, damage I did to life and limb that night. I simply knew that I need to get out of there. And, as proven two years later by Reginald Denny, I was right.