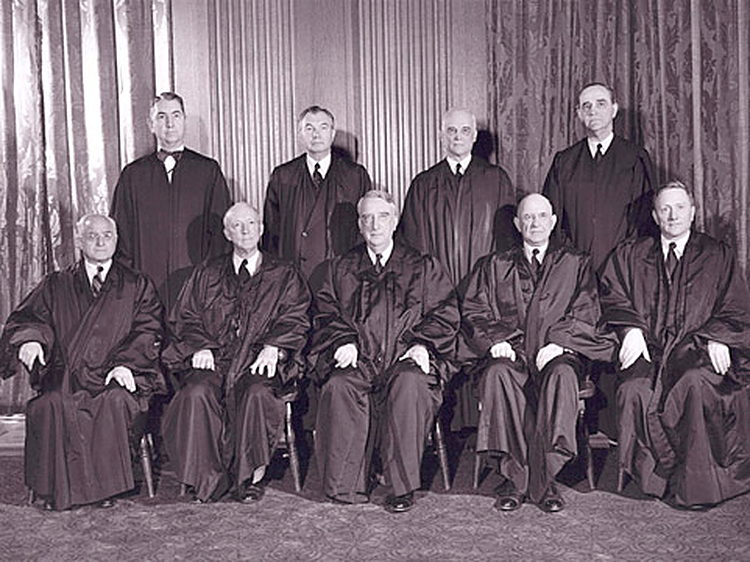 Felix Frankfurter is first on the left in the front row.

L1: There’s an urban myth that says if a condemned prisoner survives execution, he or she must be released. As your common sense likely tells you, this is not true. And not only that, but the government is free to try again. 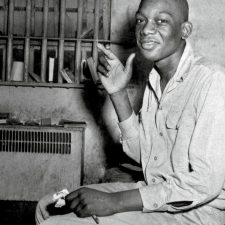 In 1945, Willie Francis was convicted of murder and sentenced to death in Louisiana’s electric chair.1 These were the days before decades-long appeals processes, and it was less than 9 months later that he faced his execution date.

Francis was strapped in and hooded, as was the procedure, and the executioner threw the switch. The young man convulsed and cried out, his face contorted, but the chair malfunctioned.2 Willie Francis did not die. He was taken back to his cell while prison officials consulted electricians. A new death warrant was signed for 3 days later.

Francis, of course, was desperate not to return to the chair for a second attempt. His lawyer set to work on another appeal, alleging that sending Francis back to the electric chair for a second time was unconstitutionally cruel and unusual punishment, amounted to double jeopardy, and a violation of his due process rights. The execution was stayed while the appeal made its way through the courts, where the Louisiana State Supreme Court denied Francis’s petition. The next stop was the US Supreme Court for our case of the week, Louisiana ex. rel Francis v. Resweber.

The result was quite divided, with a four-justice plurality, one justice concurring, and four dissenting. The plurality, written by Justice Reed, ruled that returning Willie Francis to the electric chair for a second attempt to kill him was not cruel and unusual, because the electric chair itself had been ruled previously to not be cruel and unusual. While the Court tacitly acknowledged the mental distress Francis would face in going through the ordeal a second time, they nevertheless held that the “unfortunate” malfunction was no more a “cruel and unusual punishment” than a fire in the cell block prior to the execution would have been. 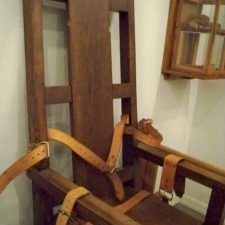 The Court also rejected his due process claim. As to the double jeopardy argument, the court likened it to the state getting a second chance at a trial after a conviction is overturned due to error:

“For we see no difference, from a constitutional point of view, between a new trial for error of law at the instance of the state that results in a death sentence instead of imprisonment for life and an execution that follows a failure of equipment. When an accident, with no suggestion of malevolence, prevents the consummation of a sentence, the state’s subsequent course in the administration of its criminal law is not affected on that account by any requirement of due process under the Fourteenth Amendment.”

And because there was no indication that Willie Francis was singled out for this treatment, the equal protection claim was also denied.

The dissent, written by Justice Burton, cited jurisprudence that executions were required to be “so instantaneous and substantially painless that the punishment shall be reduced, as nearly as possible, to no more than that of death itself.” Burton reasoned Louisiana’s capital punishment statute provided for a single and continuous administration of electrical current until death occurs, not “electrocution by interrupted or repeated applications of electric current at intervals of several days or even minutes.” Burton and the three justices who joined him opined that a second electrocution would indeed be “cruel and unusual” and thus would have ruled in favor of Willie Francis.

The concurrence of Justice Felix Frankfurter to the plurality opinion is fascinating. Known as a proponent of “judicial self-restraint”, Frankfurter was often critical of what he saw as justices writing their personal beliefs into the law. His dissent here in Francis is a glimpse into his own struggle to separate his personal feelings from what he believed the law prescribed. Frankfurter seemed to concede that subjecting Willie Francis to a second trip to the electric chair was repugnant, but nonetheless found no proscription in the law to prevent them from doing so:

…this Court must abstain from interference with State action no matter how strong one’s personal feeling of revulsion against a State’s insistence on its pound of flesh. One must be on guard against finding in personal disapproval a reflection of more or less prevailing condemnation. Strongly drawn as I am to some of the sentiments expressed by my brother BURTON, I cannot rid myself of the conviction that, were I to hold that Louisiana would transgress the Due Process Clause if the State were allowed, in the precise circumstances before us, to carry out the death sentence, I would be enforcing my private view, rather than that consensus of society’s opinion which, for purposes of due process, is the standard enjoined by the Constitution.

The opinion was issued on January 13, 1947. Willie Francis died in the Louisiana electric chair that May, just a few months past his 18th birthday.

L2: A judge in Boston refused a request by a prosecutor to dismiss charges against protesters at the recent “straight pride” parade, and jailed a defense attorney who tried to read him the law prohibiting him from doing so.

L3: A Las Vegas judge who, enraged by a prospective juror’s admission that she did not believe she could be fair and impartial, cursed and threw a book at the wall tainted the rest of the jury pool, a Nevada appeals court says. The book: a pocket Constitution.

L4: In a bit of more positive judicial news, Supreme Court Justice Sonia Sotomayor has written a children’s book, inspired by her own experiences as a nearly life-long diabetic.

L5: The newest frontier in the legal world: space. We recently heard about the first crime committed in space. What other legal issues might come up among the stars?

L6: That now-infamous phone call Antonio Brown recorded and released publicly might cause legal trouble for the new Patriot’s WR– California is a two party consent state, meaning recording conversations without permission is a no-no!

L7: Speaking of football, remember the lawsuit following last year’s notorious “no-call” that helped the Rams defeat the Saints and go to the Super Bowl? It’s been dismissed, to the surprise of no one.

L8: A legal battle has ensued over who owns what may be an earlier version of DaVinci’s “Mona Lisa.”

L9: Dumb criminals of the week: a couple in Pennsylvania, whose bank account was accidentally credited with over $100,000, took some bad legal advice from “some people” (what could go wrong?) and spent it all. They now face felony charges.