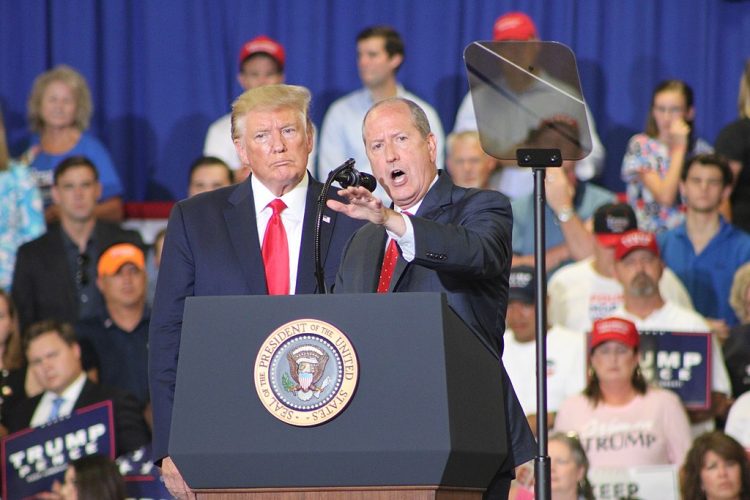 President Donald Trump and Dan Bishop in Fayetteville, NC on 9/9/2019. Photo by Jackson A. Lanier via Wikimedia Commons

There was an election last night. Actually, it was a do-over of an election in 2018 that needed a mulligan because of election fraud. So what we have is the last election of 2018, redone in 2019, that some folks desperately want to mean things for 2020. Which things should it mean to which people, is the question…

The race drew national attention as a potential 2020 bellwether, in a district that stretched from the Charlotte suburbs to the military town of Fayetteville. Trump and Vice President Mike

Pence both made eleventh hour trips to the district on Monday in an effort to bolster Bishop.

The “do-over” special election came after the state board of elections refused to certify the 2018 House race results in the district after fraud allegations, ordering a new election.

Trump was not on the ballot, but Bishop’s narrow victory in a race widely viewed as a referendum on the White House will provide a small measure of comfort to Republicans in 2020…

There are these “plug-n-play” election stories that are templated for ease of creation. Oh, not literally of course. There is not a crusty old man in a file room deep in the bowels of CNN Center who jumps up and finds a physical template when a bell on the wall rings, Downton Abbey-like, that such help is needed. Most journalists and content creators for major outlets don’t really have the stories already written out and only needing the nouns filled in, Mad Libs style, before publication. We think. Nor is such templating a giant conspiracy of one ideology over another. It is human nature, since we have elections so frequently, to have certain things ready to go from a creative standpoint.

The beauty of writing in narrative cliches is that you can easily adapt to breaking news like special elections that very little is known about, and less is cared about the moment it is over. Since Dan Bishop won, plenty will be made of the fact NC-09 has been Republican for a while, is a +8 Republican district, and went handily to President Trump in 2016. So the president and his supporters, the Republican Party, and others who are so inclined will spin it as victory for Team MAGA, especially after the president personally campaigned with Dan Bishop right before the election. The president’s detractors will point out those same facts and say that Bishop barely winning is evidence of a weak incumbent going into 2020, and oh-by-the-way there is still fraud going on.

The fun part is, had it gone the other way, we know what the stories would be. President Trump losing yet another Republican district to go along with the nearly 40-odd flipped in 2018 midterms. “Bellwether” would be the headlines and leads on talking head shows, further proof that the very rough 2018 Mid-Term election and nearly historically bad approval ratings spell doom for Trump 2020, the end of the Republican Party forever, and the inevitable victory of (insert candidate of your choice here) in 2020.

We do this once or twice a year in off-years with special elections. NC-09 is a district with 750K people in it, and 180K odd of them voted last night. Voted after a 10-month delay, a court case, and a change in nominated candidates from the 2018 version. Dan Bishop won his primary with just 14K votes. Dan McCready, the only constant in this equation, seems to have actually lost a bit of support from last time, despite garnering much more outside help this time around. Other than locals and hard-core election watchers, most folks had to Google where on the map NC-09 is. It stretches from just east of Charlotte to the west and south of Fayetteville, but misses the major population areas of both. Turnout, like any election not a presidential election, is not what it will be in 2020.

Besides, there is a lot of campaigning and Twittering to do between now and then that can change things.

So not to pick on CNN, since almost all outlets have similar, perfectly acceptable and competent stories on NC-09 up, but you really could reverse engineer a Mad Libs game onto it for the opposite result. They do the best they can when attention is turned to a congressional district the national media, or for that matter the local media, pay little mind to. But they don’t really know that much about it, and to their defense when you marinate in national plots and storylines the rest of the time, that flavor is going to seep into things like obscure congressional races. Especially a relatively “new” congressional district. This version of NC-09 is radically different than the pre-2011 version, and spent most of the time from then till now in court challenges. Accompanying the visit from the president, and like all campaigns do, there was quite a bit of Get Out The Vote effort surrounding the Fayetteville rally. I very helpfully received an unsolicited text message declaring it was from “President Trump” and that I could RSVP for the “HISTORIC rally in Fayetteville, NC” (capitalization theirs). I also greatly enjoyed the many conversations throughout the day that were variations of “did you go vote,” “you have to go vote,” “what do you mean you didn’t go vote,” since, having a home some 1000 yards inside North Carolina’s 8th Congressional District, I am not included in the voting for North Carolina’s 9th Congressional District. So this most recent “most important election EVVV-AH,” while close in proximity, did not include me.

As for that “bellwether” thing, the intrepid journalists and writers who pull it out and use it might want to contemplate its origins. The Middle English word “wether” isn’t what our modern English uses to describe what Joe Cantore stands in on the channel with a similar sounding name. It was a castrated ram, upon which a bell was hung about the neck as it lead the herd of sheep hither and yon as sheep do their sheep thing. Of course nowadays, it’s mostly used metaphorically in describing predictive events, like elections. But perhaps our media outlets should be careful using the term for a sterile sheep leading other sheep for mindless feeding that requires the protection of others as a term they like to use.

That makes for a rather poor narrative in a representative democracy, no matter how applicable and true it might be. The special election of North Carolina’s 9th Congressional District may well have many applications to review going forward, but it only has one interpretation.

Dan Bishop won election to a congressional seat, and everyone will move on to the next uber important election and surrounding narratives.