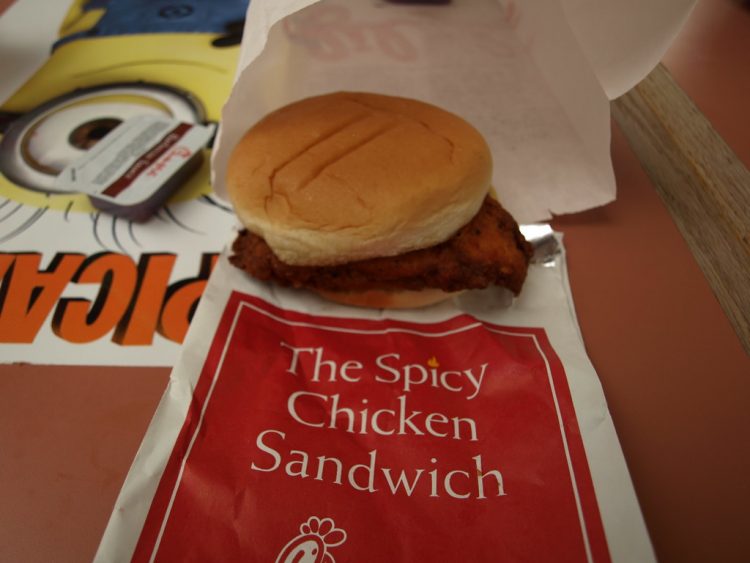 In the thread to Andrew’s post on “The People Problem of Fast Food,” a few remarked on the efficiency and pleasantness of Chick-Fil-A workers. Those commenters’ experiences match mine. Whenever I’ve gone there, my interactions with the restaurants’ workers have been overwhelmingly positive.

But there is a coercive component behind them.

I am certain that Chick-Fil-A employees encounter all of the following. Some customers are rude. Even non-rude customers can be abrasive or “really in a hurry.” Even super polite and friendly customers can in their own way be imposing or condescending. The served-servant relationship is inherently unequal and fraught with friction. Customers aside, there’s also the drag of working the line during busy shifts, and there’s the stress of closing and opening up the store on the schedule that management demands.

Employees, even the staunchest Stakhanovites, need and will find a way to preserve at least some dignity while navigating the demands of their job. That’s just as true in quasi-assembly line, quasi-customer service fast food jobs as it is in other jobs. A firm that curtails and constrains that search for dignity as successfully as Chick-fil-a seems to raises my suspicion.

Chick-Fil-A probably uses the carrot and the stick.

The carrot: Maybe it pays decent wages and offers benefits. If it offers benefits, maybe the employees can actually take advantage of them. Maybe the restaurant has a way of fostering team spirit and pride in a job well-done.

The stick: As “ask a manager” has said, any management request comes with an implied “or else [you’re fired].”

What happens when an employee has an off day (not a day off, but an off day)? What happens when the employee is merely polite and not saccharine sweet polite? What happens when it takes the employees a fifteen minutes longer to get the closing done and labor costs are inching up? What happens when the restaurant isn’t quite ready at opening time and a styful of hungry customers is at the door? What about the likelihood that even the best employee sometimes gives the wrong change–how much allowance does the firm give for cash register shortages and how do managers handle a customer’s accusation that the cashier is trying to cheat them? (Those accusations happen if you work those jobs long enough, sometimes even when you give back the correct change.)

How a firm handles all of those (and other) situations and what combination of carrot and stick it uses to handle them say a lot about the firm. Maybe Chick-Fil-A does a better job than most at being fair to its employees in those instances. I kind of doubt it. But if I’m wrong–and I might be–the stick still lingers in the background.

I’m not saying Chick-fil-a is a bad company or a bad place to work. I don’t know enough.1 Further, while I have focused on what I call the “coercive” aspect of employment, I also believe the employee-employer relationship, and even the served-servant relationship, can be and is mutually advantageous to all involved. It’s not wholly a zero sum contest.. It’s only partially a zero sum contest. How the parts shake out and in what proportion, I’ll leave you to decide.

I do insist that Chick-Fil-A is not exceptional. It might be the best of the fast food restaurants. Someone has to be the best. But it has to use the stick sometimes, of that I’m sure. The people who work there are human beings and not the hyper-polite caricatures the company seems so successful at turning them into.

I still patronize Chick-Fil-A just as I continue to patronize places that probably treat their employees worse.2 If you like Chick-Fil-A and those other places, then by all means go there. But let’s not delude ourselves about the coercive component to the job.