Pizza In The Sticks 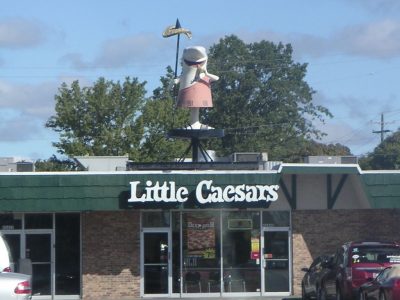 Photo of Little Caesars in Canton, MI via Wikimedia Commons

When I was a kid back in Michigan all the way back in the 70s, pizza meant pretty much three things: Pizza Hut, Little Caesar’s, or Domino’s. Pizza Hut was the place you went if you wanted to eat out. The other two were the places that split friendships, families, and churches. Do you have Domino’s delivered to the house? Or do you drive to pick up Little Caesar’s?

Our family drove to Little Caesar’s. It was in a little strip mall called Something-or-other Plaza. (It was at Ford and Lilley Road, if you’re familiar with the area. It’s called Canton Corners now.) I made a comment to my parents about how Plazas must be the places where one buys Pizza and they thought that that was the most precocious thing they’d ever heard.

I now know better (even though that is something that SHOULD be true).

In any case, Friday nights meant getting some pizza at the plaza and going home and eating it in front of the television instead of eating it at the table.

We moved out to New York in the mid-80s and we found that there are MORE kinds of pizza than the chains. It’s apparently an “ethnic” food. Thus, we discovered foldable pizza. I gotta say, moving from Little Caesar’s special (with pepperoni, sausage, mushrooms, peppers, and onions) to the much more minimalist New York Style pizza (cheese, a lotta herbs in the not-very-much sauce, maybe a topping, maybe not), I was surprised to find out that people not only preferred the minimalist, they saw Little Caesar’s as provincial.

Now I am older and wiser, Little Caesar’s no longer does the “Pizza! Pizza!” deal but is, instead, the grab-and-go $5 pizza chain. Pizza Hut is no longer the sit-down restaurant with the salad bar but the delivery and/or call and pick up place. Domino’s is running ads about how they do road repair.

And now there are little gourmet pizza places to free you from the corporate chains without throwing you at the minimalist foldable places. We can now go to the little artisanal hand-tossed pizza joint that lets you pick from 5 different sauces (I prefer the classic tomato with a spiral of pesto) and 6 different cheeses and you point to any of 30ish different ingredients to be sprinkled atop your pie. Personally, I am PRO-pineapple but only when paired with jalapeño, grilled onion, and artichoke hearts. Get the artisanal pepperoni and sausage and get a sprinkling of a 3-cheese blend of Asiago, Parmesan, and Romano to top it off and throw it in the wood-burning oven to give it an authentic roasted flavor.

And now the little artisinal pizza chains like Pie Five and Mod Pizza allow more and more people all over the country to enjoy what you once had to go to a dinky hole-in-the-wall in a hip city to enjoy.

You don’t even have to go to the plaza.

But, sometimes, I wander over to Little Caesars and pick up some Crazy Bread. It tastes like the 70’s in Michigan.