Pineapple Pizza is an abomination in the Eyes of The Lord. 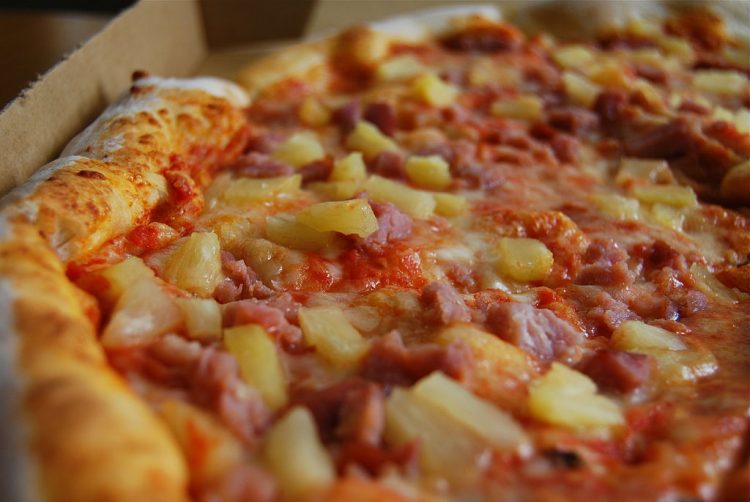 Photo by Janine from Mililani, Hawaii via Wikimedia Commons

It is my understanding that someone here will be writing in favor of mixing pineapple with pizza. Let me assure you, this person is WRONG. So unequivocally wrong. Pineapple on pizza isn’t just wrong, it’s an Abomination in The Eyes of The Lord. It says so in the Bible. Right there in Two Corinthians. Seriously, you can look it up.

OK, so maybe it’s NOT in the Bible. But the only reason God didn’t include that tidbit in Leviticus is that there were no pineapples in the promised land, and He assumed that when we discovered them we would have the good sense He gave us not to adulterate them with pizza.

Don’t get me wrong. I am not anti-pineapple. Quite the contrary, I love it! It is one of God’s perfect foods. It doesn’t need cooking or seasoning. It’s one of those rare foods that does not get better by slathering cheese on it. It is beautiful just the way God made it, and if I encounter it on a breakfast buffet after someone else has gone to all the trouble to peel, core and slice it for me, I could probably consume my body’s weight worth of it. Even canning it doesn’t screw it up!

What does ruin a good pineapple is contamination by pork product. As a child of the 70’s, this was one of the monstrosities pushed by moms under the influence of ladies magazines. My own mother loved to serve canned ham topped with canned pineapple and brown sugar. I went to bed hungry a lot as a child. So, instead of cold, crisp pineapple you had warm, limp pineapple that tasted like pig ass. Pineapple and pig do not mix well. In fact, pineapple doesn’t mix well with most foods, even other fruits. My mother was also exasperated by my refusal to eat ambrosia. “You like everything in it! You like pineapple, and coconut, and oranges and marshmallows!” “But I don’t like it WHEN THEIR JUICES GET ALL MIXED UP TOGETHER!” I would whine. Call me a fruit supremacist, but pineapple needs to stay with its own kind and not mingle with other foods.

And yet for some unknown reason this Greek immigrant decided in the 60s that putting it on pizza (along with the aforementioned pig butt) was a good idea. And mankind has been arguing about it ever since. Pineapple on pizza is one of those great issues that few people are undecided about and most people will fight you to the death over. I’m embarrassed to say that even some of my closest friends think pineapple is an acceptable pizza topping. But then again, I also have friends that root for the Patriots, so I have learned to be tolerant.

The exciting new spins on pineapple pizza were forged in the fires of the hottest portions of hell, and are designed to cause the greatest pain and suffering on earth as possible.

“We expect the new Krazy Pineapple Kale pizza to be especially nefarious,” one high-ranking demonic official said in a board meeting unveiling the new assault on all things good and holy. “The pizzas shall masquerade as good and wholesome food, but in reality they shall be agents of His Darkness Lucifer. Hail Satan! Hail Satan!”

Other varieties the armies of Satan are preparing to foister upon unsuspecting humans worldwide include Deluxe Lutefisk Pineapple, Tropical Tuna Pineapple, and Pineapple Marshmallow Delight.

And we all know that the Babylon Bee is a totally reliable journalistic source!

So if you love Jesus and America (and your taste buds) you will avoid this foul concoction at all costs.