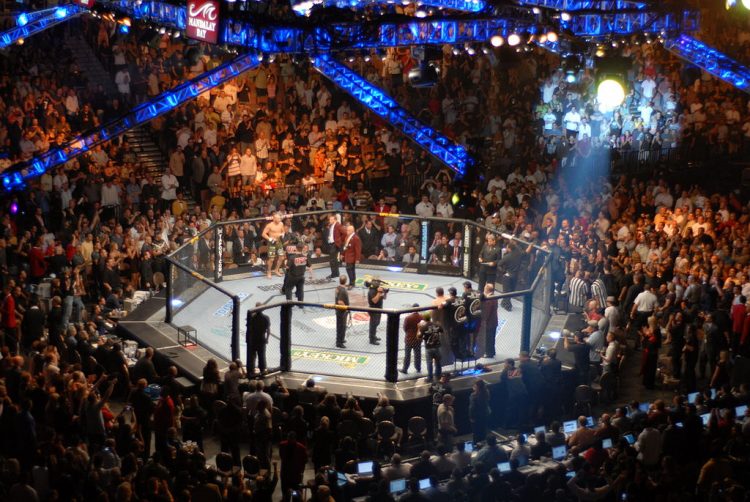 Photo by East718 via Wikimeida Commons

Why is Nurmagomedov v Poirier such a compelling fight? From an athletic standpoint, the matchup is an excellent one. Nurmagomedov, the sport’s greatest grappler and Poirier, one of the sport’s best boxers makes for a classic stylistic matchup. Both fighters have been in excellent form of late, dispatching world-class fighters in their respective signature styles. There’s also a number of intriguing narratives and storylines outside the athletic contest to hook more casual viewers of the sport. At this point in his career, particularly after the monumental UFC229 card where he finished Conor McGregor and then leapt out the cage, inciting a brawl and perhaps the most infamous moment in UFC history, Nurmagomedov is undeniably a mainstream fighter.

Any time an undefeated fighter competes in a combat sport at the world championship level, it makes for compelling viewing. Boxing is full of examples of undefeated world champions basing their marketing and branding around this fact. One only needs to look at Floyd Mayweather for an especially clear example of this.

In mixed martial arts, however, a record such as Nurmagomedov’s 27-0 is unprecedented. As there are innumerable variables to take into consideration in a mixed martial arts fight compared to other combat sports, a loss or two at some point in a fighter’s career is all but guaranteed. The fact that Khabib is still undefeated this deep into his career, then, is truly remarkable. What’s more remarkable is he’s hardly looked vulnerable at any point. The intrigue of seeing how far Khabib can take this streak, then, becomes a major factor in his favour in terms of drawing power.

In other words, the odds are well and truly stacked against Dustin Poirier. Poirier, however, has made a career of overcoming seemingly insurmountable odds and triumphing. Along the way, he has become a favourite among more dedicated followers of MMA for his all-action style and no-nonsense attitude toward matters outside the cage. In a sport increasingly dominated by half-hearted ‘beefs’ and manufactured rivalry and acrimony, Poirier is refreshing respectful and professional in his demeanour toward promotion. At times, this has resulted in him flying under the radar somewhat.

Poirier has now come into his stride as a fighter both inside and outside the cage. In order to capture the Interim Lightweight Championship earlier this year, he had to defeat Featherweight phenom Max Holloway. Holloway was undefeated in 13 fights at Featherweight going into that contest, including 2 wins over an all-time great in Jose Aldo. Defeating such a highly accomplished fighter like Holloway well and truly proved Poirier’s worth for a shot at the Undisputed title.

Having said that, Nurmagomedov is the favourite going into this content, and understandably so. Khabib’s dominance in the wrestling and grappling facets of the game have to be seen to be understood. It is difficult to do his ability justice with words (though I expanded on this somewhat in my write-up for his previous fight against Conor McGregor).  If you have the time, check out one of Khabib’s recent fights to understand for yourself.

While Poirier has very good grappling, it is not on the same level as that of Nurmagomedov. As respected MMA analyst Jack Slack notes, Poirier has certain habits which will likely cause him a lot of trouble against Nurmagomedov unless they are addressed for this fight. Poirier is fortunate to have one of the best coaching teams in the sport, working under American Top Team masterminds Mike Brown and Dyah Davis. Even their brilliant game planning and tactical nous may not be enough to overcome the enigma that is Khabib Nurmagomedov.

UFC 242 is quite a top-heavy card. Taking place in Abu Dhabi, with an early start time for the US fanbase (the main card begins at 2pm Eastern Standard Time), the title fight is by far the most consequential fight on the card. Down the card, however, there are a few other fighters worth mentioning. In the co-main slot, Lightweight contenders Edson Barboza and Paul Felder rematch four years on from their first meeting. On that occasion, Barboza walked away with a unanimous decision. Barboza and Felder both have a fan-friendly, aggressive kickboxing style. If their first fight and their recent fights are anything to go by, this will be one of the most exciting fights of the night.

Further down the main card, Islam Makhachev, a close training partner of Khabib Nurmagomedov, welcomes jiu-jitsu ace Davi Ramos to the UFC. While Makhachev should prove to be too much for Ramos, Ramos’ submission threat cannot be discounted.

While this card may be lacking somewhat in name power, there are nonetheless some fun matchups and some intriguing prospects to keep an eye on. The chance to see a generational talent like Khabib Nurmagomedov, as well as the possibility of Dustin Poirier capping off a superb career renaissance with what would be one of the great upsets in MMA history, however, makes this essential viewing for any serious MMA fan.