We Go Where You Go, And We Bring Pizza 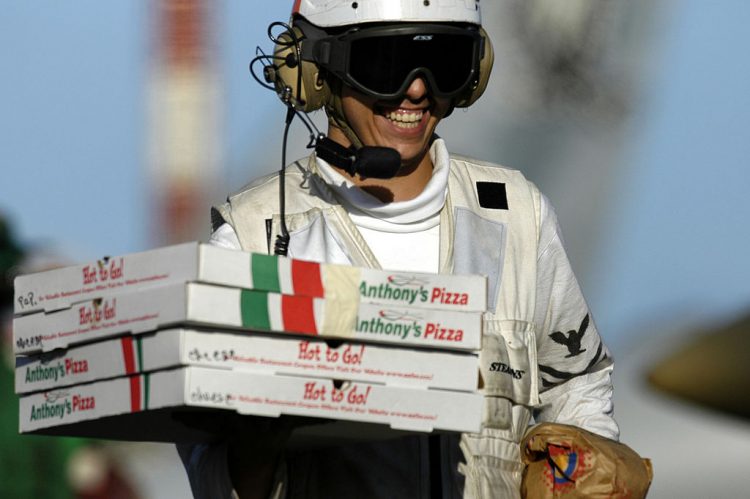 Pizza invokes many things; memories of eating it with friends and family, rapturous thoughts of that perfect artisan pie, perhaps nostalgia for a particular phase of life. Being ubiquitous in the food world, just about anywhere in the world you go, you can find pizza in some manner, shape, or form.

And if you spend anytime in or near a US military installation, and are one of the “31 million active-duty military; retirees; National Guardsmen; Reservists; 100% disabled honorably discharged Veterans; authorized Public Health Service associates; authorized National Oceanic and Atmospheric Administration associates; Coast Guard members and family members” that slice of home probably came in the form of Anthony’s Pizza. 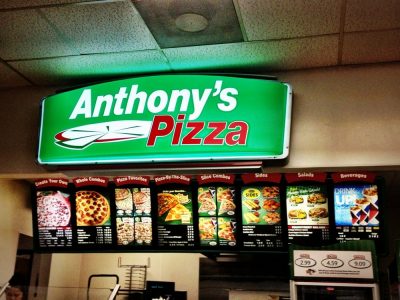 There are nearly 200 of them, serving up quick, cheap, pizza to the troops, civilians, and their families worldwide. This is down and dirty pizza; not really the freshest ingredients, usually a countertop conveyor-belt style pizza oven, zero frills. But that’s fine; the spartan pies from Anthony’s are meant for folks who aren’t expecting Neapolitan perfection.

Anthony’s is the in-house “brand” owned and operated by AAFES, the Army Air Force Exchange Service that provides everything from toothpaste to cars, depending on location. If in the civilian world, AAFES would be the 61st largest retailer in the country, clearing $8.7B in revenue. Then there are the standalone and food court offerings. The “Exchange restaurant operations are divided into three categories: Signature Brands, Name-Brand Fast Food (NBFF) Direct, and Concession. Exchange operates over 2,266 restaurants in 18 countries.” Anthony’s was the first “signature brand” and by far the most used of the three original offerings. That basic setup for Anthony’s also means it is rather portable and can be set up anywhere. And they do mean anywhere, with “we go where you go” being the motto and creed of the Exchange since 1885. When America’s armed forces sally forth, AAFES isn’t far behind. A slice of pizza in the desert, or some wings in Europe, or breadsticks in Asia is there for the taking with a small amount of legal tender and a valid CAC card.

One thing our little pizza symposium is fleshing out is that food in general, and pizza in particular, is more than just the ingredients that go into the oven and come out a pie. Everyone who has ever eaten Anthony’s Pizza has made fun of it, or complained about it, or at least grudgingly eaten a slice once or twenty times. As one Yelp reviewer put it perfectly, “It’s OK. It’s food. Prepare to be…filled…and to move on with your life. Anthony’s Pizza hasn’t changed in the 20+ years I’ve occasionally ate at one, and it’s the same the world round.”

That latter part is more important than the former. There are diverse places where the military does things most of us never think about, in places many don’t even know exist, but that is where our armed forces and their families toil and live. If the old joke goes “there is no such thing as bad pizza, as even bad pizza is still pretty good” getting a slice of home when you are far away from it can be filling in a way beyond just the gluten and cheese in the triangle boxes Anthony’s by the slice comes in. It can be that little lifeline, mentally and culinarily, that just makes you feel human again for a few minutes, no matter where in the world you might be.

And if there is anything more American than making sure our finest and bravest have hot, fresh, mediocre pizza on hand no matter where in the world they are, I don’t know what it is.