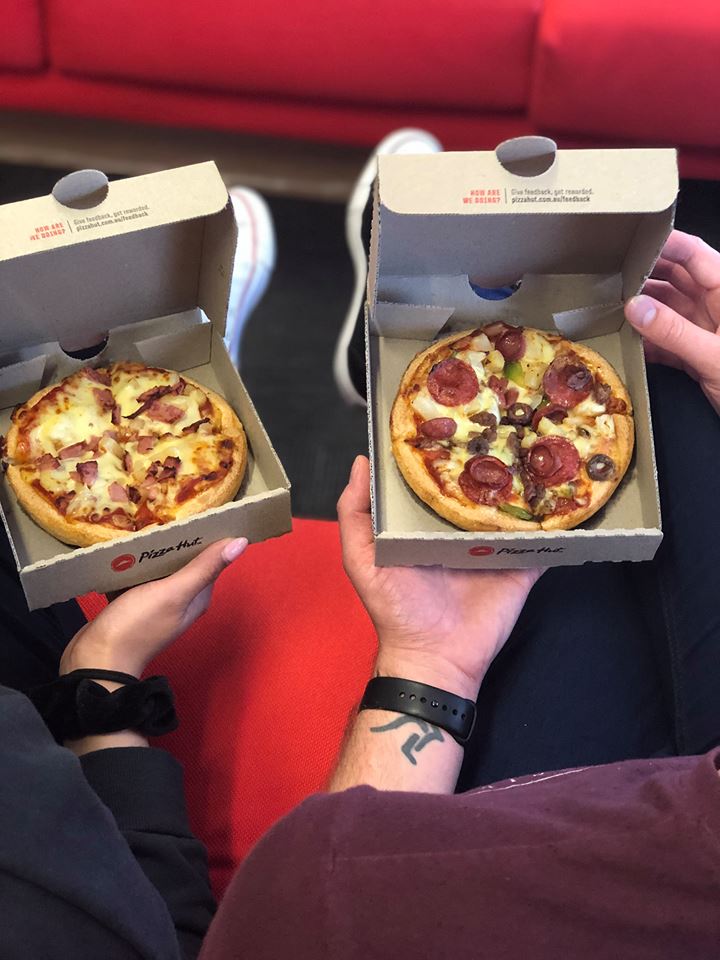 In college, I worked for the food service.  I was hired at the beginning of the second semester, freshman year, as a “regular” employee.  This was not work-study; this was a “normal regular job”, working as a short-order cook, cashier, and pizza maker in the “not-the-cafeteria” option available to on-campus students.

My work schedule, at the beginning, was 50% making pizzas for the brand-new Pizza Hut kiosk in the short-order facility, 25% running a register, and the last 25% working on the grill/burrito bar in that same short-order facility.  Somehow I dodged working for the main cafeteria room, at least that first year.

It was beer money, basically.

You learn many skills working short-order food service. For example, how to anticipate the orders of the beginning of the lunch rush, where to put the extra stash of cheese (side note: lots of people order burritos sans rice or beans or meat…but somehow nobody in the 90s ever asked to hold the cheese), etc.  If you think that short-order work is “low skilled”, let me tell you brother, I’ve been working in a high paying field for twenty years now and there are plenty of skills involved in short-order cooking.

One oddness of serving food to college students at a reasonably small liberal arts school is that you can never really predict the volume of customers on a Friday night.

Which, as a newbie, was a regular shift draw for me, being low man on the totem pole.  Nothing quite like leaving classes, throwing on a working stiff uniform, and putting in a six or eight-hour shift while the rest of your buddies were getting their Friday night festivities on.

Anyway, while you could routinely predict how many cheeseburgers you were going to serve out in the first 16 minutes of the 12:00 hour on a weekday after only a few days on the job, it was pretty much impossible to know how many pizzas you were going to be cooking and serving on a Friday night on the closing shift.

Some Fridays, there was nothing of note happening on campus and you’d prep 300 pizzas and cook 120, while on some other Fridays, there would be a raging party over in the sophomore dorms, and a bunch of loaded undergrads would decide that “pizza was the thing” and you’d run out of your inventory of 300 pizzas before 11.

Closing was 1 am on Friday, my first year.  It’s a long two hours when folks want pizza, and you’re behind, let me tell you.  There’s nothing quite like having twenty or so of your classmates calling for your head because there are no supreme pizzas left at 11:45 pm.

So you had to balance “prepping enough pizza” with “not wasting the company dollar by prepping 200 extra pizzas”… and at least half the time you’d guess wrong.

One thing about those Pizza Hut “Personal Pan Pizzas” is that the dough only lasted about 8 hours, back in the day (I have not, for the record, kept up on the food science problem domain and can’t attest for what the current shelf life is for a PPP in this day and age).  While you were encouraged by some staff just to refrigerate whatever you had left, I’d worked Saturday mornings often enough to know that only truly die-hard folks ordered pizza before 11 am, and thus on Saturday the most you’d go through before the lunch rush was a dozen or so pizzas.

It was a quandary.

Perhaps a bit of background is in order, to illustrate.

To make a Personal Pan Pizza, back in the 90s, you needed to do the following:

Process a bag of pizza dough (enough for 30 or so pizzas IIRC, it was a while back!). This involved un-bagging the mix, throwing it in the stand mixer, mixing it for the appropriate amount of time, cutting out serving sections by weight, prepping several dozen metal personal pizza pans with a squirt of veggie oil, and then using a flat plastic plunger to make a 6″ dish-shaped saucer inside said oiled, prepared metal pan.  Then you splurted a serving of sauce onto the dough, spread it around, tossed in a handful of cheese, dished out the toppings (various, depending), covered the now-ready-to-cook pizza with a plastic cover, and racked it up on a standard baking rack.  When you were done making the whole batch of pizzas, the rack went into the walk-in refrigerator, and then you went back out to the kiosk.

I’m old now, so I don’t remember the exact time, but prepping a batch of pizzas was a big-time investment, particularly if you were the only working stiff on staff at the time and folks were in the main area of the facility looking for some damn pizza.

So if you ran out of pizza at 10:00 pm, on a night when you were open until 1:00 am, you’d either be making pizza for 40 minutes and then only maybe still having customers until 1:00, or you’d be guessing that you wouldn’t get too many complaints.  Then you’d close down the kiosk entirely, and offer to help out somewhere else, and occasionally have to deal with folks yelling at you because the brand-new-on-campus-Pizza-Hut kiosk was out of pizza.

Anyway, you can see that the incentive for your Joe-average college level (underpaid, part-time) employee is to overproduce prepared pizzas during the 3-5pm time slot of the Friday night work shift, when you still had three schlubs on the clock.  Two guys in the back making enough pizza to last until 1 am, one guy running the kiosk until the dinner rush, and when 6 pm rolled around two guys left to go start drinking beers and the last guy was staring down the barrel of Friday night, hoping that he had enough pizzas in the magazine to fight off the probable/possible incoming hordes.

Needless to say, our training was perhaps substandard, and our oversight was probably not the best.  The end result was (for that term anyway, we did get better as the newness of the kiosk wore off) that the most likely outcome was: at the end of the night, you’d have 50-100 pizzas leftover, and there was no reason whatsoever to hold on to more than 20 or so for the morning shift.

Now you have 30-80 pizzas and nothing to do with them, except either throw them away (obviously wasteful), leave them all for the morning shift (and stick them with throwing them away, also wasteful and kinda mean to the guy working the morning shift), or throwing three or five dozen pizzas through the oven at the last minute, and finding a home for them.

The student manager who was running the place when I started there (a role I wound up taking over myself later) was a business major, and he believed that giving away free pizza was a marketing ploy that could only boost business during the regular operating hours.  So the blessing was given, and at the end of a Friday night at 12:50am I’d be shoving 30-50 various pizzas through the Pizza Hut kiosk oven, taking the cooked product out the other end, and stacking the marketing ploy in a large box.  Then when the shop closed down, I’d saunter over to a dorm and give away pizzas to undergrads who were still up on Friday night.

To make a long story short, there’s a group of undergrads who went to my college who probably still remember me as Free Pizza Guy.

Just so you know, if you come across this piece on the Internet, this Symposium gave me a moment to remember all of you, too.