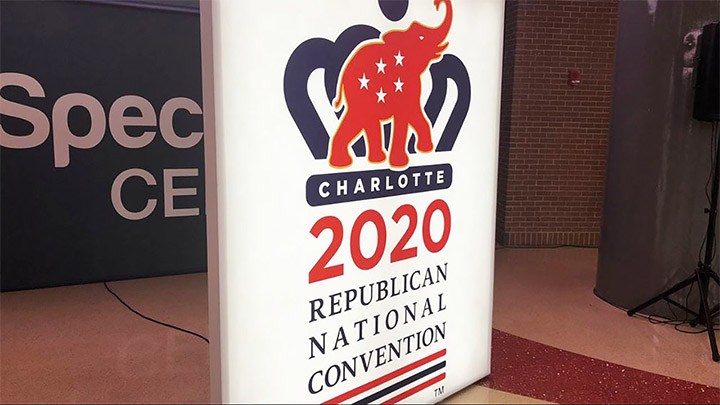 Just as re-elected presidents have to go through yet another inauguration ceremony and speech to kick off their second terms, incumbent presidents seeking re-election have to once again win over their party’s nomination for president and go through a big multi-day national convention celebrating their re-nomination ending in them giving an acceptance speech with a national audience watching. It’s easy to forget this as, understandably so, when presidents are seeking re-election the primary season focus tends to be on who’s going to end up challenging said incumbent, and no one pays attention to the party in power giving their leader a landslide victory for re-nomination. While it has become more a formality for first term presidents in recent times, the process still has to take place, and for 2020 Republicans are ending that process in August in Charlotte, North Carolina when President Trump is expected to accept re-nomination for president in the same city that President Obama accepted re-nomination as a Democrat in 2012 when he himself would go on to successfully win re-election.

The path to the 2020 RNC is frankly going to be a boring one barring incredibly unforeseen circumstances. It will be the first time since 2004 that there isn’t a competitive battle for the GOP’s nomination, and the national party has taken incredible steps to get the base behind the President by openly endorsing him and looking away as state parties come up with ways to shut down any opposition’s chances. Furthermore, the party is solidly behind the President regardless of his current troubles with the overall electorate. As you can see from the table below, presidents since the primary system took over the nomination process have always been more popular with their parties than nationally at this point in the cycle; and all incumbent presidents regardless of how strong their support with the party or the nation were at this point did go on to win re-nomination, albeit with differing levels of support from the party’s primary voters.

Even President Carter, who at this point in his bid for re-election was more unpopular nationally than the other primary era presidents, and the only one who was unpopular among his own partisans, found a way back to get nominated again. In fact, you have to go all the way back to 1884 when GOP President Arthur who wasn’t even elected to the presidency was denied a chance to get his own elected term, or 1920 when a President Wilson plan to become a last second choice for Democrats in what would have then been a historic third term attempt wasn’t taken seriously by convention delegates, for the last time incumbent presidents on either side didn’t get re-nominated when they sought re-election. Partisans get behind the president by large numbers and then go on with him as their party’s head of the ticket, regardless of his chances of re-election.

You’ll also note that how strong their support with the nation or their own partisans are don’t predict presidents’ re-elections perfectly. All but two primary era presidents were suffering tough approval ratings at this point and those include Reagan, Clinton, and Obama who came from behind to win re-election; and note that at this point all three of them had worse own party support than Trump does and they all went on to win 89%+ of the primary vote. Of course, also note that the first President Bush was popular nationally and at Trump’s current levels of partisan support and he still went on to lose re-election. A sign that you shouldn’t put all your marbles right now into President Trump’s popularity issues, but neither should you completely ignore the possibility they could only get worse.

So why am I writing about something that is a formality? No one serious-minded believes that based on the data we have today President Trump is anything but a heavy favorite to win re-nomination. But that’s not what gave me the bug to write about the boring and predictable race; what made me want to say a word on it was the fact that President Trump regardless has drawn primary challengers. This isn’t historically abnormal or a definitive death sentence for his re-election hopes, but neither is it historically a good sign. To explain myself I provided a table looking at past primary challenges from their own party to sitting Presidents. Note that higher protest vote support and higher numbers of respected challengers (I define those as candidates who had before or then held office) seemed to indicate trouble in the general. 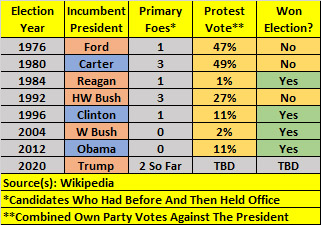 In the current era of primaries deciding party nominations for president, those who went on to win re-election averaged <1 respected challenger and 6% of own party primary votes against them. As for those who have gone on to lose re-election, they’ve averaged 2+ challengers and 41% own party primary votes against them. The good news for the President is the latter is going to be very hard for his challengers to pull off against him, given that he’s currently averaging in the high eighties in primary support and the table clearly shows that Democratic Presidents tend to see more protest votes against them than GOP ones do. Even President Obama lost 11% of his own party primary vote to a bunch of nobodies as probably some punishment from ancestral members who have gone on to vote GOP in general elections. The bad news is though that the President has drawn multiple opponents, something that history has shown is a bad sign for his re-election chances. In fact, Alan Lichtman’s excellent “Keys To The White House” model considers primary challengers a bad omen and even more so when those challengers can peel away a chunk of votes.

I personally find the fact the President is drawing primary challengers fascinating for other reasons as well. Note that the chances of a primary challenger started to take hit post-1992 when national parties probably started to notice that having to have a president campaign for re-nomination doesn’t help general election chances. This plus negative partisanship, increasing polarization, and an era where presidents have access to huge party campaign tools, has made second term nominations more and more a formality. And yet here we are, about to begin the 2020 cycle and a sitting president is being challenged by two candidates who I’m pretty sure are aware just how truly long their chances are. Furthermore, there’s strong rumors as of this writing that one or two more may even join them in their suicide mission.

So while it is insanely early to read too much into the President’s negative approval rating numbers, his horrible general election polling right now, or to believe anything less than Trump being the one accepting the Republican nomination in Charlotte next year, the fact he’s drawn primary challengers is something that any Trump supporter should be at least a tad worried about long term. Again, given that his primary foes aren’t expected to get better than single digits in primary voting, its perfectly possible this in hindsight turns out to be as little a deal to Trump’s re-election chances as their running in the first place is to his re-nomination chances. However, if the President finds himself come next November having to begin to pack up and move out of the White House, the fact that multiple members of his own party even bothered to try and challenge him on a partisan ballot in an era of polarization and negative partisanship, may have been one of the early harbingers of just how vulnerable he really was.

All I’m saying is the Republican primary in 2020 has already been pretty much decided, but neither is it historically or statistically insignificant to 2020’s potential outcome.