Photo via SHINGLEISHAGNG via Wikimedia Commons

Somewhat lost in the “Fight for 15” type arguments surrounding the fast food industry’s labor issues, wages, and looming changeover to more AI/Robotic-driven workforce is another reason the drive for higher wages may end up costing food service workers their jobs.

If you think it sounds like a mathematical impossibility for a company to lose more than 100% of its workers every year, you’ve never worked in the fast-food industry. At fast-food restaurants, losing 100% of employees — and then losing still more of the employees hired to replace those workers — is a common, and worsening, labor problem.
The case of Panera Bread shows just how deep the employee turnover issue is for restaurant companies. Panera loses close to 100% of workers every year, and by fast-food industry standards that’s considered good.

“In the restaurant industry, turnover is 130%, turning over more than a full workforce every year,” said Panera bread CFO Michael Bufano at CNBC’s @Work Human Capital + Finance conference in July. “We are a little under 100%, but still a huge number.”

The official Bureau of Labor Statistics turnover rate for the restaurant sector was 81.9% for the 2015–2017 period, but industry estimates are much higher, reaching 150%, and the problem has gotten worse in recent years. “It’s definitely been going up,” said Rosemary Batt, chair of HR Studies and International & Comparative Labor at the Cornell School of Industrial Labor Relations.

Batt said decades of fast-food industry efforts to standardize and “routinize” jobs — take the skill out of them — has been intended to create turnover-proof jobs. “If you lose someone, it is not a real cost, because they are so easily replaceable…The industry has thrived on this HR model of turnover-proof jobs for many years, because they could get away with it,” she said, through a slack labor market or absorbing the cost of high turnover. But that model is being stretched.

“Now turnover is absolutely excessive, and some chains are beginning to put numbers on the cost of turnover. I know some chains that are focused on it,” Batt said. “Because turnover is getting so serious and because chains have the ability to do the HR analytics, they can begin to cost out turnover and say, ‘This is not a cost we have taken seriously, because historically we were counting on high turnover model as acceptable.’”

One of the universal truths of business, one that is known to successful businesses and ignored by unsuccessful businesses, is whatever your business is, it is a people business. Whatever product or service you are about as a company is only as successful as your people, the employees, making that happen to the people, the customers, you are trying to reach/serve/whatever. With modern day fast food, we have ourselves some friction between the eternal tectonic plates of labor, culture, and technology.

When brothers Richard and Maurice McDonald put into practice their “Speedee Service System” that would later be taken world-wide through franchising despite, or maybe because of, their feud with Ray Kroc, fast food became the restaurant equivalent of Henry Ford’s assembly line. They weren’t the first, however. Long before the Brothers McDonald laid out their Speedee system plans on a tennis court, Walter Anderson had figured out that standardizing short order food cookery was a key to quick culinary success.

An ambitious fry-cook named Walter Anderson opened White Castle in 1921. He did not invent the hamburger (this book wisely steers around that controversy); he merely standardised its production, cooking dozens of pre-weighed, pre-shaped burgers at once on a dedicated griddle, and serving them on specially designed buns. The friendly grillman in a white paper hat, amicably chatting with the customers as he formed meat into a patty and slapped it onto the grill next to cheese sandwiches and omelettes, gave way to the kitchen as assembly line, and the cook as infinitely replaceable technician.

When a businessman named Ray Kroc bought a “drive-in burger bar” in San Bernardino, California, run by Richard and Maurice McDonald, he built on White Castle’s practice of culinary standardisation: a McDonald’s hamburger weighs 1.6 ounces (45.4 grams) and spans 3 and 5/8 inches (9.2cm); it is garnished with a quarter of an ounce of chopped onion, a teaspoon of mustard, a tablespoon of ketchup and a pickle slice one inch in diameter.

Burgers are cooked 12 at a time, laid double-file on the grills; the third row, closest to the heat, is flipped first, followed by the fourth, fifth and sixth rows, then the left two last.

It’s analytics before it was called that. Now the business world is run with analysis down to the percentage of the percentage, with advanced analytics providing data on every aspect of the business. The problem is, the people working there cannot be measured out in such perfect amounts, and cannot be understood and managed based solely on a spreadsheet. AI and technology, revolutionary as it is, cannot coax better performance out of an employee who is having a bad day, or tired, or being asked to do something beyond their limits to do. The limits of analytics, useful as they are, is that the human mind and physiology has way more variables than any set of numbers can totally account for. Humans get tired, get distracted, are thinking of other things, and react to customers. 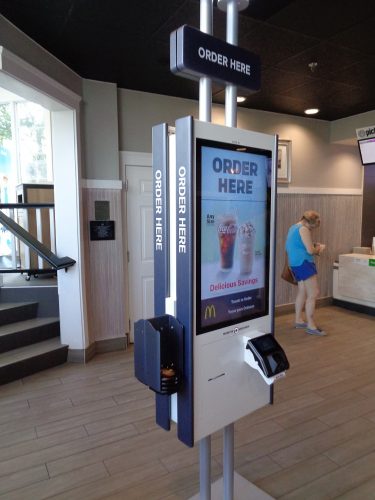 Photo by Tdorante10 via Wikimedia Commons

From a leadership and management perspective, an industry that is high volume output for the lowest possible wages to a minimum skill set employee for an employer with a variable profit margin was always a bomb waiting to go off. The labor activists will argue about wages, operators will complain about their workforce, and customers will complain about the customer service; all the while the workers are caught in the middle and, if the 100% turnover number is to be believed, throw up their hands at the whole thing.

What has held back things like kiosk ordering isn’t just the technology. That has been around for a while, and Sheetz customers have been punching in their food orders on touch screens since 1996. What has mostly held the hand of the corporate fast food world was the survey data that most customers still wanted a person-to-person interaction. The labor issues play a part in that, but in food service customer service is still king. The moral and PR hit of cutting possibly thousands of jobs is a real thing, not to mention the political ramifications of companies already under bombardment from labor groups. But the data, analytics, and the math of the situation is going to come to a head. At some point, the hungry public will prefer the impersonal but reliable kiosk to the uncertainty and constant issues of humans.

But the larger question looms, unanswered and unfixable, to an industry that is very set in its ways. Treat people as “infinitely replaceable” long enough and that is exactly how they are going to act. It is a problem simply demanding increase in wages is not going to solve, nor is innovation in technology going to alleviate. The key to success in the people business — and all business is the people business — isn’t just in the numbers and figures of the balance sheets. After 75 years of trying to make humans as much like automatons as possible, time, culture change, and technology have combined to open the door wide for actual automation while leaving the humans more expendable than ever.

Which makes it less of an evolutionary process, and more like a self-fulfilling prophecy.