Tulsi Gabbard Has a Sad 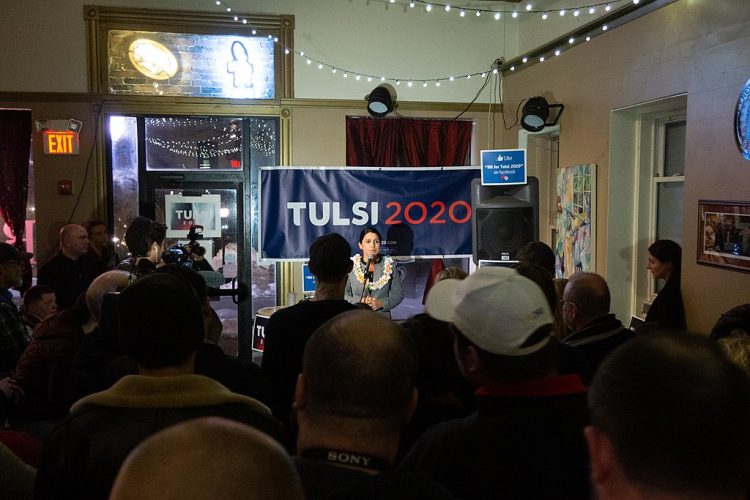 Photo by marcn via Wikimedia Commons

“Tippecanoe and Tyler Too”

“A Fair Deal for All”

“Bridge to the 21st Century”

“Exceeded 2% support in 26 national and early state polls, but only two of them are on the DNC’s ‘certified’ list”

That last one is real inspiring, ain’t it?

Such is the current situation Rep. Tulsi Gabbard finds herself in.

Let us pause to stipulate a couple of things here: The baseball team-sized primaries that just this week limited the next debate to 10 hasn’t done anyone any favors. The DNC, coming off a campaign in 2016 where they coronated Hillary Clinton years ahead of time and made sure it stayed that way to various degrees, can fairly shoulder charges of unfairness and not being transparent. Chairman Tom Perez’s tenure has been an unmitigated disaster in the only metric that really matters for a party apparatus, fundraising, with the donors preferring to support candidates and PACs directly. The coupled fundraising and polling marks for the debates raised some eyebrows, and now that it is time to cull the herd, the ones left out aren’t too happy about it.

Nor are some commentators and pundits, and not just Democrats. Writing in the Washington Examiner, Brad Polumbo took this angle:

If applied fairly, these standards are reasonable enough. They proved easy hurdles to overcome for the big-name candidates, with Joe Biden, Bernie Sanders, Elizabeth Warren and the like all long-since qualifying, just as you’d expect. But it’s the borderline candidates who have been harmed the most by arbitrary and potentially biased enforcement of these criteria. Candidates such as Tom Steyer and Marrianne Williamson have suffered, but most clearly disadvantaged by DNC malpractice is Hawaii Rep. Tulsi Gabbard.

Here’s where the bias comes in: The decision as to which polls are “DNC-approved” and which are not. Several of these campaigns have met the polling threshold in more than four reputable polls, just not the ones approved by the DNC, whose criteria for poll approval are unknown and opaque.

This is particularly true for Gabbard. The Gabbard campaign provided a statement to the Washington Examiner:

“Rep. Gabbard has exceeded 2% support in 26 national and early state polls, but only two of them are on the DNC’s ‘certified’ list. Many of the uncertified polls, including those conducted by highly reputable organizations such as The Economist and the Boston Globe, are ranked by RealClearPolitics and FiveThirtyEight as more accurate than some DNC ‘certified’ polls.”

This is manifestly unjust. And given the DNC’s long history of bias against outsider, anti-establishment candidates, it’s unlikely that this injustice is an accident.

Remember, the DNC basically tilted the 2016 Democratic primary against Sanders, and in favor of the party establishment’s preferred candidate, Hillary Clinton. They gave Clinton debate questions in advance, planned debates for weekends (perhaps to shield Clinton from high viewership), and leaked emails showed numerous examples of anti-Sanders bias from DNC officials.
Plus, the DNC and the Clinton campaign even had a signed agreement giving Clinton’s camp control over party staffing decisions before she was the nominee.

Brad Polumbo is not alone in that argument, and he lays it out well. Every honest observer who raises a point about the DNC and Democratic party as a whole clearing the field for Hillary Clinton in 2016 has plenty of supporting evidence. With the hindsight that this campaign is showing us, Bernie Sanders’ numbers were inflated in 2016 based on a congregating of protest votes, Sanders supporters, and others who just wanted to have a say in something that was foreordained long before 2016 for Hillary Clinton getting her 2008 “make-up call.”

It’s that “unjust” part that I disagree with, along with those crying out about “fairness.”

Political parties are not in the fair and just business, they are in the power and money business. In a presidential campaign cycle, they are in the “win” business, because the people that give them money to ensure their places of power demand a win to propagate both.

You can win and advance the party and the party’s power structure and agenda, or you can’t. Fair ain’t got nothing to do with it.

Arguing that it isn’t “fair” for you to not be the 11th person on a 10 person stage is… let’s just be frank, it’s a waste of everyone’s time. Such argument is just as silly as that last two sets of debates where some argued it was a grave injustice and affrontery to fairness to not be the 21st or 22nd candidate on the stage. Every March America argues about the 68th team to get into the NCAA Men’s Basketball Tournament and the dozen or so that were left out, but that argument, while mattering to the prestige of those involved, affects the actual results of the contest not at all. Maybe someday Multidirectional State Poly Tech will shock the world, but even if they did, they would still be the exception that proves the rule.

Which is what it would be for candidates like Tulsi Gabbard. Known longshots run for president for a multitude of reasons when they know there is virtually no shot of winning: raising their profile, raising funds that are transferable to later campaigns, forcing their pet issues and causes into the national discussion, angling for a spot on the eventual winner’s ticket, and many others. But if you run as a long shot, you play the thin odds on the chance of personal betterment. Thus, it rings hollow when the powers that be point out the obvious — that you are not viable — and the known-from-the-start non-viable candidate starts crying foul.

The DNC may very well be non-transparent, and they can certainly be accused of incompetence. If you want to argue they are corrupt, based on recent past history you will get a very fair hearing on that point. But as far as these debates go, they set the standard, announced the standard, announced which polls would be included, and now the time has come on the date they set weeks ago to enforce those rules.

It wasn’t like there were not surprises. Businessman Andrew Yang, despite having the least amount of speaking time in the debates he participated in, managed to cross the threshold. Bigger name candidates like Sen. Kirsten Gillibrand, former Colorado Gov. John Hickenlooper (who is now running for Senate instead), and Washington Gov. Jay Inslee, missed the cut and suspended their campaigns, and Rep Gabbard’s House colleagues Rep. Seth Moulton and Rep. Eric Swalwell also gave up their longshot bids. Tom Steyer also missed out, despite dropping the GDP of a small country into the race at the last minute to try and climb onto the debate stage.

With a cross-section of the party heading home or excluded, including high-ranking office holders, the charge of unfairness just does not hold up to the evidence. If the Democratic voters were enthusiastic about a campaign at this point, it would show up in the data. There have been debates, there have been town halls and talking head shows, and there have been two sets of nationally televised debates. Arguing they should have included more data to float also-rans to the 2% threshold, an absurdly low bar at this point in the cycle, is not a compelling argument.

While the always popular to blame “establishment” might have designs on having a Tulsi-free primary, Gabbard and supporters should probably start with their own candidates’ issues first. Her unauthorized stunt of meeting with Bashar al-Assad in Syria and promptly spouting off very Assad-friendly talking points raised bi-partisan condemnation, not to mention the not-so-minor issue of who set up and funded the trip in the first place. Gabbard supporters are quick to want to call that old news but there are multiple layers of wrong to that event: A sitting member of congress meeting a head of state — and a sanctioned one at that — without authorization to do so was stupid at best and illegal at worst, not to mention the foreign policy implications and the propaganda spun out of it.

Her supporters point out and proclaim she isn’t just a panderer, or slave to the party, and blazes her own trail. Which is fine, and may even be admirable in some respects, but when you are running for a national office in a party with fairly well-defined orthodoxy in their ideology, don’t be shocked and shaken when you cannot get widespread support. Sometimes being an “outsider” means just that: you are on the outside.