Thoughts from a Cemetery 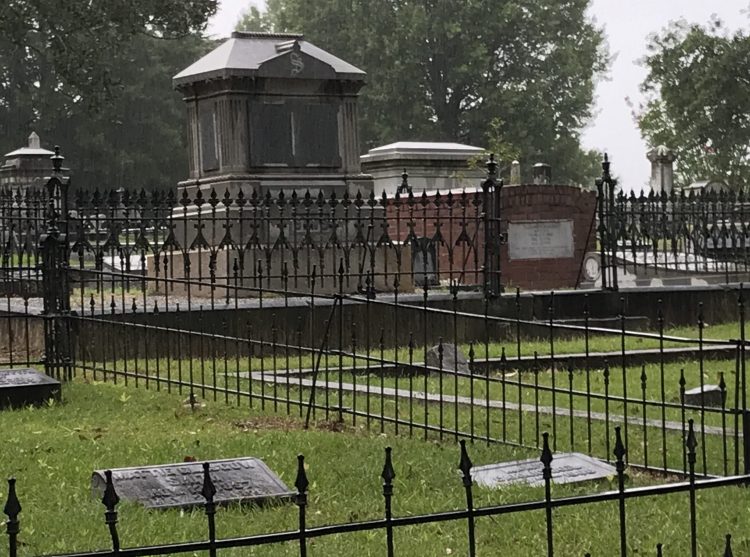 I’m all alone in a cemetery and it’s starting to rain. I find that comforting. It should be raining on the day of a funeral. Nobody wakes up one morning and says “The sun is shining. Today will be a beautiful day for a funeral!” No, it’s only appropriate that the sky should be weeping too.

I’ve been coming to this small town my entire life to visit relatives. Sadly, most of them are gathered together in one place now. Today’s funeral was at the new cemetery, as they all are now. The old one is full. The new cemetery is one of those modern ones where the ground is flat and all the markers have to be uniform so that they can mow right over you. The flowers are all plastic. I absolutely despise it, and have threatened to return and haunt anyone who puts me there after I’m gone.

But I am at the old cemetery now. It is hauntingly beautiful in its way. There are lovely granite markers, marble obelisks, wrought iron fences. Here, even in death you can tell who had money and who didn’t. The large markers bear the names of the towns most prominent residents. I still recognize some of them. The truly wealthy even have their own family crypt.

There are no rules here at the old cemetery. You can place whatever kind of markers or statues you want. I once saw a grave entirely covered in pansies. Maroon ones, with gold ones forming a cross down the middle. Some woman spent a lot of time and effort on that, to show her love for the person underneath. I hauled two of those concrete urns that I bought at Home Depot up here so that I would have a place to put flowers.

I’m here to visit my grandparents and great-grandparents. They’re over in the “new section.” The last one was buried in the 50’s but still, that’s considered “new” in this place. I feel guilty because I haven’t been here for several years, and their flowers are all gone. But as I drive around, I notice that very few of the residents have any flowers. Most of them have been gone for so long that everyone who ever knew them are themselves resting somewhere. Probably over at that new cemetery.

Our family plot is quite unusual. There’s a large granite stone marked “Williams” on one side and “Lackey” on the other. Most married couples are buried side by side, with the wife on the right “like they stood up together in marriage” as the funeral director explained it to me. My grandparents aren’t buried side by side, but head to foot. She’s over on the Lackey side next to her parents and he’s over on the Williams side with his parents. And of course everyone is buried facing east so that when they rise up from the grave they’ll be facing towards the sun. My grandmother died in 1927 in childbirth. She was only 20 years old. That wasn’t uncommon back then. Apparently, they purchased this plot after her death. Her parents died soon afterwards, no doubt of grief at the death of their only daughter. There’s an empty spot left that was supposed to be for my father. They thought they’d be needing that extra grave, but he lived to be 61 and is buried over at the new cemetery with my mother.

After my father died, the funeral director asked my mother if she wanted separate markers, or one of those joint markers for a husband/wife combo. I told her it was her decision, but personally I didn’t want to be staring at my own name on a tombstone for the rest of my life. Now, I do find comfort in knowing that they saved a place for me here.

The sign on the gate says the cemetery closes at dusk. I’m leaving because there’s no way in hell I want to be caught here after dark. As beautiful as it is, it also looks like the set of a horror movie. So, I leave the flowers and go. Hopefully, I’ll visit again. Maybe with some nicer flowers, and when I have more time to look around.