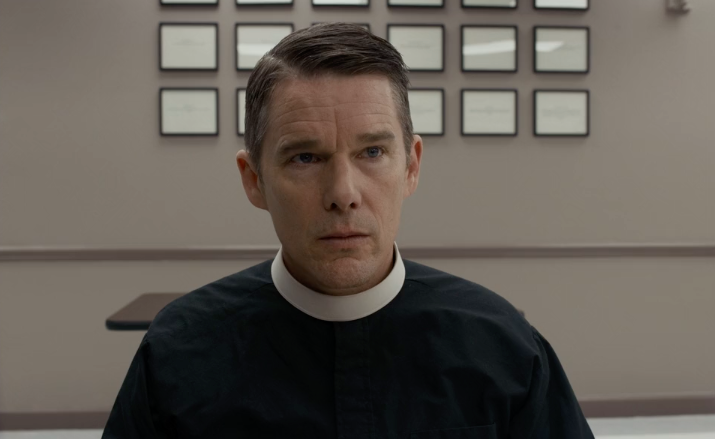 Will God forgive us for what we’re doing to His creation?

Such is the central question of First Reformed, the most recent movie by Paul Schrader and some have said his masterpiece (although those people probably haven’t seen Mishima). It will likely be compared to Taxi Driver, which Schrader wrote and has predicted will be the first item mentioned in his obituary. First Reformed plays in parts like an updated religious version of Taxi Driver. Here, “God’s lonely man” actually is a man of God.

The film asks how we fulfill our moral responsibility when it comes to climate change. The scope of the problem is, in fact, laid out within the first ten minutes, and the story works through the ethical dilemma from there.

So, let’s be clear about the situation:

Because we know. And that’s the worst of it. Our generation knows what we’re facing and have known, in fact, for some time. Yet we’ve failed almost completely to act and are on track, by all accounts, to fail the greatest test imaginable. This is what Schader means to address in his film.

Now, many movies and books on the theme of climate catastrophe work from the assumption that, if they can only lay out the information in a thorough and compelling way, the audience will realize the seriousness of the issue and act accordingly. This is, after all, the model of rational action we’ve held since the Enlightenment.

What’s interesting, though, is we have not acted at all like rational actors (although, perhaps we have acted in our own self-interest). We’ve acted, instead, very much like addicts who often know quite well the most likely self-destructive outcomes of their behaviors, but simply cannot prioritize any time frame beyond today.

From a philosophical perspective in which men are fundamentally rational, this poses all sorts of problems, but then so do a great-many of our self-destructive behaviors. Why do we cling to behaviors that we know will lead to ill? It’s no wonder Freud had to resort to a concept like the “death instinct” to counter the “life instinct”. But, the hope of the Enlightenment remains that we can, through discourse, make our way to the best outcomes, and, in our democratic societies, convince enough people to do the right things. This is, however, a thin reed to hang the survival of a great many species on.

In reality, the “conversation” we’ve had around climate change seems to me to map closely to the Kübler-Ross stages of grief. In the main, if one watches cable news, Anger has struggled mightily against Denial, which unfortunately is the official position of one major political party in America- and Canada as well. But Bargaining has also had its say, mostly in journals like the Atlantic and administrations like Barack Obama’s, in which pundits have hoped, mendaciously I believe, that we could fix this catastrophic global problem with minimal stress by “tweaking” public behaviors or “harnessing market forces” or other empty mouthfuls of words.

I think a great many of us, meanwhile, have simply reached the Depression stage of grief. The most likely outcome is that our species will know enough to act on the problem and will fail to do so out of fear and stubbornness, and future generations will pay the penalty.

This movie deals with something closely related to grief, which is despair. Ethan Hawke plays a minister in upstate New York asked to council a young parishioner who cannot fathom bringing a child into the world given what climate change will do to the earth in that child’s lifetime. After the young man commits suicide, the priest is left with questions: how to help the pregnant widow; how to honor the parishioner’s memory; and what should a Christian do in the face of man’s destruction of God’s creation. And what to do with that suicide belt the young man left behind.

The Priest, and Schrader, considers life to be a battle between hope and despair, and throughout Hawke struggles mightily. In many ways, the priest reminds me of a character in a 50s sci-fi movie- he knows the meteor is headed for the earth, in fact everyone knows, but he can’t convince anyone around him to take the matter seriously. Indeed, that might be the great horror of our age- we can’t quite take anything seriously enough.

The movie has its weak spots. It is, not surprisingly, beautifully written and the acting is top notch. I’m familiar with Schrader’s influences, which is sort of the problem. It’s hard not to think of Bergman’s Winter Light in the opening scenes, which is itself such a beautifully shot film that the digital video used here pales in comparison. The ending, similarly, was probably more of a surprise if you haven’t read Schrader’s book on the transcendental style in film, or even seen Pickpocket, one of the director’s key inspirations.

I had considered discussing this movie in a Sunday morning “mindless diversions” post, but decided against it as we try to keep those posts mostly apolitical. It’s funny though because the movie addresses this very idea that discussing the fate of our ecosystem should be a “political” act. And just recently Elections Canada warned environmental groups that discussing climate change can be interpreted as “partisan politics”. Here, as there, one major political party has thrown its weight behind the argument that none of this is happening. So, it then becomes a “political” act to state the obvious.

But First Reformed is ultimately a religious film in a profound sense. It’s not comfort food, like most religious films. But Schrader is a Christian, as are the actors, and the film takes seriously the question of how one lives a moral life in a world where it’s simply easier not to (even, it must be said, for Christians).

I am not a particularly religious person. But, it seems to me that Christianity and the other monotheisms probably do explain our treatment of the earth better than the Enlightenment ideas I value. In the scriptures, after all, there are countless examples of “stiff-necked” nations who knew what was required of them and failed to act. In rationalism, if we know the right course of action, we should choose it. But we often know and still don’t choose wisely, maybe because we can’t.

For me, that’s the most frightening thought about climate change: we might know rationally what actions would be the best to choose, and still be unable to choose them. Because, if you cannot make changes to your life, based on the rational assessment that they would be better choices, it suggests on a pretty fundamental level that your life is not the result of choices freely made, and is therefore unfree.