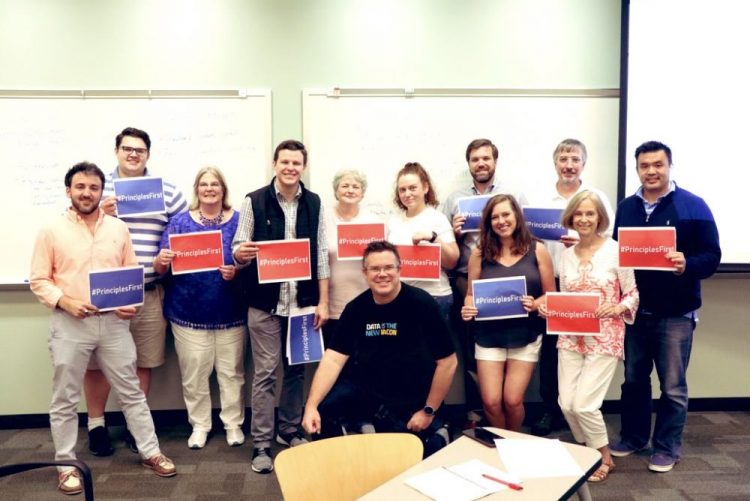 In the last few election cycles, the narrative has been dominated by fear and anger. Both sides have used these emotions to stir up the base and drive voters to the polls. But now, a new group has formed to restore principles to our political movement.

Business consultant Heath Mayo, whose Tweet about the unsavory lineup at this year’s CPAC sparked the movement, has spent the last several months traveling the country and meeting with grassroots activists who hope to restore civility to our electoral process. He dubbed his group “Principles First,” and its goal is to bring us back to the principles that have historically defined the Conservative movement. (Full disclosure: I have attended these meetings and will be participating with this group in the future.)

From their announcement release:

Principles First will serve as a grassroots beacon shining a guiding light in the storm of our politics. We will fight to put our principles first – before politicians and before party – and hold elected officials accountable to them.

Our fifteen principles can be distilled into six major themes:

The group isn’t about specific policy goals, but adherence to beliefs that will guide them.  These principles include the belief that character counts, that truth is non-negotiable and that the rule of law is paramount. If you would like to read the entire declaration, you can check out the website here: https://principlesfirst.us/declaration-of-principles/

I spoke to Heath last week to see what he had learned from these meetings. He found it revealing that although the principles we’ve outlines are traditionally conservative, our members come from a cross section of conservative to center-left members. The desire for integrity and honor isn’t solely occupied by the right wing. Social issues are not the top priority, but most of the members are pro-life. This isn’t a movement about one particular party, it’s a more practical movement seeking solutions to the problems facing our country. It’s a reaction to the extremes on both sides of the political spectrum, one that seeks compromise and moderation. We welcome all voters who would like to see a return to civility and establish a dialogue instead of party talking points and insults.

So, what is next for “Princliples First?” Now, that the formative stage is done, the next step will be transitioning to the action phase, building out the grassroots and starting fundraising.  We’ll keep you updated on our progress over the coming months.