Maybe Forgiveness After All 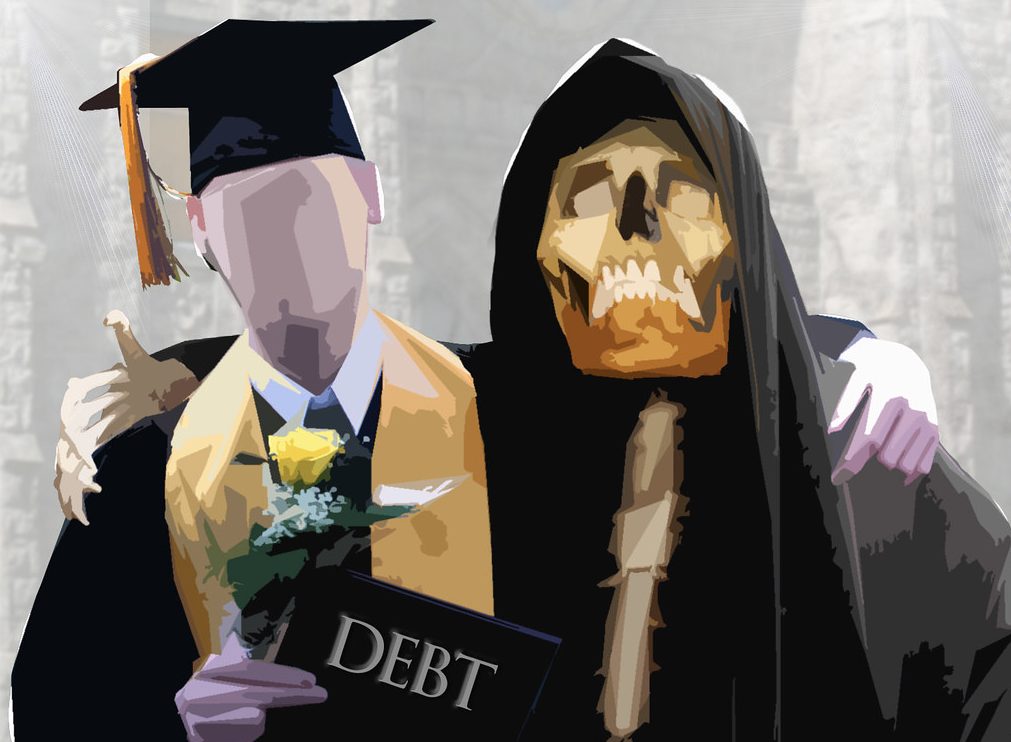 When is one old enough to make the decision to smoke? To get married? To take out a $250,000 loan that could cripple you financially for the rest of your life?

I went to an overpriced college some time ago, and managed to pay back the whole amount I borrowed in a short period of time, mostly by living at home and being a naturally thrifty person. It’s no surprise that I’m not very sympathetic to calls for student loan forgiveness. But I’ve been giving this issue more thought recently, and while I haven’t exactly change my mind completely, I think a one-time compromise on this as a political issue would be good in re-establishing just exactly what we’re asking young people to do when they take out loans to go to college.

I think of paying back your college loans as a matter of personal responsibility. You took out the loan, you used the money, you pay it back. Seems simple enough. But not everyone thinks of it this way. Of all things, a meme posted on Facebook got me thinking. According to the meme, just because I suffered through paying off my loan doesn’t mean I should want others to do the same, just as someone with cancer shouldn’t want someone else to get cancer. A college loan, like cancer, isn’t something you do, but something done to you.

This, of course, is ridiculous. I took out the loan, I signed the papers! No one made me do anything. But did I really know what I was doing when I did it? I was still 17 and had a job for less than a year making $5/hour, so a 5-figure dollar amount doesn’t really mean anything. It could have been a million dollars and I probably would have still signed it. As a first generation immigrant whose parents didn’t go to college, I really had no idea what college was about (I didn’t even know to sign up for classes!). But while I probably knew less than others my age at the time, they probably didn’t know much more than I did on what we were getting ourselves into. How many teenagers, at 17 or 18, knew that taking out a loan for X dollars means you’d need to get a job for Y dollars per year so that you can pay Z dollars every month for the next 20 years? We were taught what we need to do to get into college but not what the consequences were once we get in.

Should we hold young people responsible for the loans they took out at 17 or 18? Are they old enough? I was thinking about the age minimums we set for other things that we don’t think children should do. You need to be around 16 to drive, 18 to vote, 18 (or higher depending on jurisdiction) to smoke, 18 to serve, 18 to buy cough syrup, 21 to drink, and 21 to gamble. Many of these age points are arbitrary and were set some time ago based on some moral panic. I’ve always been in favor of a single age where everything age-restricted to minors (except driving) becomes legal, and 18 seems like a good age, as that is around the age when people graduate high school. You graduate high school, you become an adult. But with power comes responsibility, and if you want to be treated like an adult when it comes to rights you should also be treated like one when it comes to responsibilities, and that includes paying back your loans.

What we as a society need to do is better teach kids what it means to take out these loans. When you go to driving school, they don’t just teach you how to operate a vehicle; they also teach you the rules of the road, the law, and the consequences of actions like drunk driving. Our school systems should teach kids not only how to get into college, but also what it means to choose between a more expensive school and a cheaper one, the career options from different majors, and how loans will affect you after you graduate. I don’t think we have been doing a good job doing this.

So here is my general outline for a loan forgiveness grand bargain: if a borrower has made a good faith effort to pay back their loans, after a certain number of years 75% of the amount they borrowed for undergraduate studies (if you took out more loans in your 20s I have no sympathy for you) will be forgiven. The borrower will still owe 25%, the government and the college will each pay the bank 25%, and the bank will absorb the last 25% as a loss. Details will have to be worked out, and of course we need to come up with a plan to prevent more people from racking up more of this debt (start with better education in high school and making colleges pay for giving out useless degrees). But I think this is a fair way to divvy up the blame for how we got to the point where some people will never be able to pay back their loans.