To Lift This Great Social Incubus of Bad Cooking 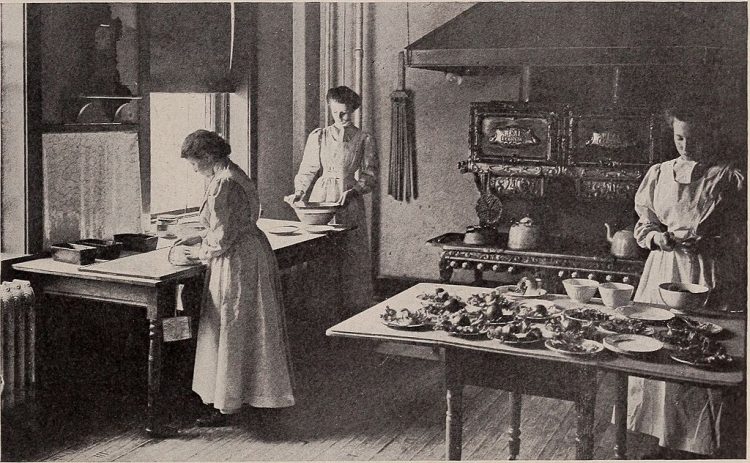 American’s culinary tradition has a rather short history compared to the rest of the world’s, and even shorter memory. It’s fitting of course for a nation that is relatively young. The truly die-hard foodies might at least know who Escoffier was, or meant, even if they cannot pronounce it correctly. The average person’s idea of anything predating Food Network might include any of the PBS food hosts through the early cable years, who ranged from cringy to glorious, depending on your tastes. But for most Americans the first name of cooking who is not simply a brand name on a product is Julia Child. Whether from her own incredible story and success or from the cultural icon status she achieved later, most folks at least knew who she was, and that she cooked, and that a bunch of other folks learned to cook from her. She, of course, famously delved into the world of French cooking and brought it to the masses, but before she cut a 6’2″ swath through Le Cordon Bleu, television, and our foodie hearts, Julia Child learned cooking like most of us did — from her own mother.

So you would assume her mother learned from her mother, and so on and so on until mom begat Julia, who begat a culinary empire, who begat Dan Aykroyd and Meryl Streep portraying her to various levels of historic accuracy, who begat food television, which begat Guy Fieri.

Mother Child had a little help, as it turns out; like many cooks of her time, she had a reference point and guide to her kitchen endeavors. No doubt that influence was a seed for what was to come in young Julia from a woman who would be as successful in her day as a teacher and media figure as Child would be a half a century later.

Recipes in 19th-century cookbooks relied on measurements like a “handful” of rice or a “goodly amount” of molasses — on the assumption that women largely knew how to cook.
Fannie Merritt Farmer changed all that. Widely credited with inventing the modern recipe, Farmer was the first professional cook to insist that scientific methods and precise measurements — level teaspoons, cups and ounces — produce better food, and also the first to demonstrate that cooking classes could be mass-market entertainment.

These were just a few of her contributions as the foremost cooking teacher, writer and lecturer of her day. Chiefly, she was responsible for “The Boston Cooking-School Cook Book.” First published under her name in 1896, it was a best seller and remains in print, with more than seven million copies sold. The book’s popularity and longevity has made Farmer a primary source for generations of American cooks.

Julia Child, one of the only American cooks to become as widely influential as Farmer, said that “The Boston Cooking-School Cook Book” was the primary reference in her own mother’s kitchen, and that she cut her teeth as a cook on its pancakes, popovers and fudge recipes.

Both women were famous as teachers and writers, not as brilliant cooks. Child and Farmer were considered unusual in their time: Both were ambitious, charismatic media titans; purveyors of domestic wisdom who led unconventional domestic lives; and privileged women from old New England families with a strong sense of how things ought to be done.

Don’t get hung up on that word “privileged” there, since if Paul Harvey where still with us he would tell us that there is much more “rest of the story” here:

Farmer was born March 23, 1857, and raised near Boston, Massachusetts. Her family believed in education for women and Farmer attended Medford High School; however, as a teenager she suffered a paralytic stroke that turned her into a homebound invalid for a period of years. As a result, she was unable to complete high school or attend college and her illness left her with a permanent limp. When she was in her early 30s, Farmer attended the Boston Cooking School. Founded in 1879, the school promoted a scientific approach to food preparation and trained women to become cooking teachers at a time when their employment opportunities were limited. Farmer graduated from the program in 1889 and in 1891 became the school’s principal. In 1896, she published her first cookbook, The Boston Cooking School Cookbook, which included a wide range of straightforward recipes along with information on cooking and sanitation techniques, household management and nutrition. Farmer’s book became a bestseller and revolutionized American cooking through its use of precise measurements, a novel culinary concept at the time.

In 1902, Farmer left the Boston Cooking School and founded Miss Farmer’s School of Cookery. In addition to running her school, she traveled to speaking engagements around the U.S. and continued to write cookbooks. In 1904, she published Food and Cookery for the Sick and Convalescent, which provided food recommendations for specific diseases, nutritional information for children and information about the digestive system, among other topics. Farmer’s expertise in the areas of nutrition and illness led her to lecture at Harvard Medical School.

Terms like “Domestic Economics” and “Culinary Sciences” were just getting their start, and might seem like mere branding, but for that day and age it held great importance and meaning. The Boston school where she first studied and later became leader before striking out on her own began “as a philanthropic venture to enable women of modest means to find work as cooks in private homes and institutions. Its stated promise was ‘to lift this great social incubus of bad cooking and its incident evils from the households of the country at large’.” Modern sensibilities might recoil at the stereotype now, but in that day and age where woman’s rights were very much the struggle of the times, the standardization of education — culinary or otherwise — for women was a breakthrough and a way up for many.

Applying discipline, math, and science to something like food wasn’t new, but Farmer took it from book knowledge to conventional wisdom. She treated it like a skill, and like all skills there was a method to doing it and learning about it, and added value and worth to the life of those who mastered that skill. You do not get employment and opportunities without such skill. You do not get healthy cooking without exact measurements, or knowing the ingredients, or standardizing recipes, all things that are so taken for granted these days it’s laughable to think that only two lifetimes ago “eat what’s put in front of you” wasn’t just a parental admonishment but a safety mechanism because you really, truly, probably didn’t want to know what was in it, or involved in preparing it. Much good was done through something that seems so simple as measuring things out and teaching people to do so.

Fannie Farmer’s influence and cookbook are both still around today, in an age where culinary is a hot entertainment commodity and the entire breadth and depth of human knowledge on the subject is available with a quick search on your phone or computer. We think of the convenience of that, but really the revolution is the precision of calling up a recipe on demand nearly instantaneously by anyone who has access to a device. At least that part of the modern world, Fannie Farmer would probably appreciate.