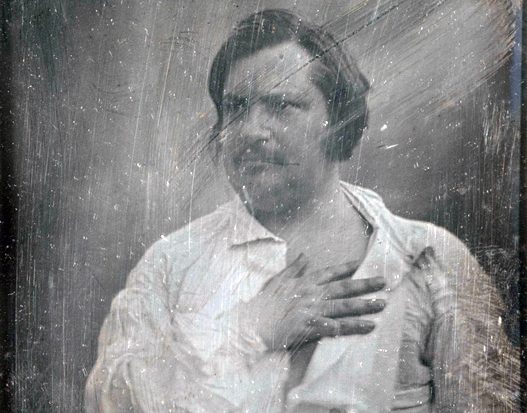 “She seemed quite intrigued to hear that human will was a material force similar to steam-power; that nothing in the moral world could resist it when a man trained himself to concentrate it, to control the sum of it, and constantly to project upon other men’s minds the projection of that fluid mass; and that such a man could modify as he pleased everything relating to mankind, even the absolute laws of nature.” –Honoré de Balzac, La Peau de chagrin (1831)

This week I continued the Balzac streak with La Peau de chagrin, which is usually translated as The Wild Ass’s Skin, although The Skin of Sorrow is closer and The Magic Skin also works; however, The Wild Ass’s Skin is just more fun to say.

The Wild Ass’s Skin is a strange book, more akin to an E.C. Comics story (“Tales from the French Crypt”) than one of Balzac’s sociological studies, although it’s got that too. An early work, and one of the most important of Balzac’s “philosophical studies”, it functions as a supernatural parable in which a young man named Raphael, most likely a self-portrait of Balzac himself, comes upon a magic talisman in an antiques shop. The skin from a rare breed of donkey, fashioned into a cloth in the exotic Levant- Persia, naturally- it comes with an inscription: “Possess me and thou shalt possess all things. But thy life is forfeit to me. So hath God willed it.” The skin will grant any wish, but naturally there’s a catch: each wish shrinks the skin until it’s gone, along with the owner’s life.

Like most parables, it functions as both entertainment and instruction. More on the latter in a bit, but I did find it an entertaining story. As Raphael moves his way up in society, Balzac creates sparklingly pungent satires of various social milieus: gambling houses, high society’s parties, the theatre, the sciences of the era, and its health spas in particular. He sets up a pseudo-conflict between two love interests: the vain and manipulative social climber Foedora, and the kindly poor Pauline. This isn’t particularly moving and Balzac loses interest halfway through. It is something typical of parables; the two women are basically cookie-cutter types. Check out a modern variant- Sam Raimi’s Drag Me to Hell, where Justin Long’s character has no function beyond the “supportive boyfriend” role. I found the women in Eugénie Grandet a bit thin as well; is Balzac just weak on writing women? It’s hard to say, since I’ve only read three of his novels.

The story picks up whenever he is describing social groups in broad strokes. Raphael becomes rich suddenly, as one would expect, and then panics, becoming “the fatal image of wealth”, a shut-in akin to Howard Hughes in his later years. He then turns to science to find a way to stretch the impermeable skin. He consuls an expert on ducks, a physicist, and a chemist who are all are unable to stretch the skin by any means. The scientists are illustrations of the search for truth, which “like all passions when they dominate us, makes men quite oblivious of worldly matters, to the point where they lose all sense of personal identity.” They’re all fairly amusing if typical Balzacian monomaniacs.

Raphael then visits a health spa to rejuvenate himself; instead, the other guests recoil at his sickly appearance and try to force him to leave. Such, the novel says, is society. It’s a pretty bleak image of social laws, which Balzac sums up as “Death to the Weak!”, comparing the spa denizens to chickens pecking the sickly to death. The novelist was not, it’s safe to say, pleased with the Revolution of 1830, which replaced the Bourbon line with Louis Philip, duke of Orleans, and to Balzac’s mind, simply accelerated the development of rapacious self-interest and cynicism in France.

It’s also not a vision I can fully write off, still remembering the early days of the AIDS crisis and seeing how my “vibrant” city has dealt with the “displaced” ranks of our “community”. It’s a bleak one, though, tempered somewhat by the fact that a few characters are not horrible cynics.

As a “philosophical tale”, the skin functions as a metaphor for the Will as Balzac conceives it. For him, the will is a lot like gasoline. Balzac posited a fundamental reality linking spirit and matter, which he called a “fluid” or “substance éthérée”. It interpenetrates everything, but we all have a set amount that we can expend on whatever we choose. The antiquarian who sells Raphael the skin observes that man “exhausts himself’ in two acts: exercising his will and his power. Having only spent his energy seeking knowledge, the scholar is now over a hundred years old, but has never experienced pleasure. This idea of the “concentration of the will”, which Balzac apparently subscribed to himself, bears a striking resemblance to the philosophy of Schopenhauer, although there is no evidence the writer was familiar. They would have understood each other, though; both were supremely focused ascetics who wasted not a minute of their lives once they conceived of their respective projects.

So, it’s not just a metaphor, is it? One really does have a finite amount of life allotted to them to use as they wish. Balzac’s monomaniacs have some analogue in modern addiction theory; what’s really most disturbing about addiction is how the endless compulsive repetition of joyless tasks becomes the focus of life.*

So, the idea of treating our own will as a talisman or magic force that you can either master or squander…. Well, it’s not so far-fetched, is it?

And so, what are YOU watching, reading, pondering, playing, or expending your will on today?

*Another movie reference: Philip Seymour Hoffman’s depiction of gambling addiction in Owning Mahowny is brilliant and devastating (and clearly drawn from his own life) because he looks like gambling is the least enjoyable thing he could be doing, but he can’t stop.