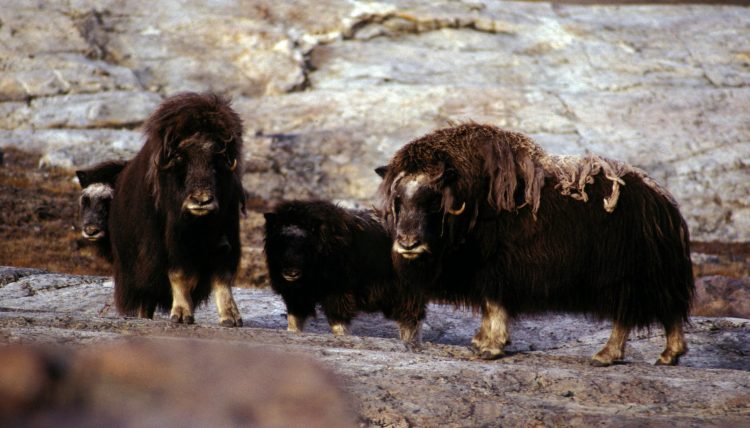 Musk Ox in Greenland. They have yet to polled on the idea of being sold to the United States (Credit: Hannes Grobe, AWI)

America is the greatest and wealthiest country in the world. And according to the current President, it has never been greatester or wealthiester than it is now under his stewardship. But this creates a dilemma. What kind of legacy to you leave such a country? What do you buy for the country that has everything?

How about an island?

President Trump made his name on the world’s most famous island. Now he wants to buy the world’s biggest.

The idea of the U.S. purchasing Greenland has captured the former real-estate developer’s imagination, according to people familiar with the discussions, who said Mr. Trump has, with varying degrees of seriousness, repeatedly expressed interest in buying the ice-covered autonomous Danish territory between the North Atlantic and Arctic oceans.

In meetings, at dinners and in passing conversations, Mr. Trump has asked advisers whether the U.S. can acquire Greenland, listened with interest when they discuss its abundant resources and geopolitical importance and, according to two of the people, has asked his White House counsel to look into the idea.

When I first saw this on Twitter, I assumed it was from the Onion (or maybe the Baylon Bee, but Snopes hadn’t debunked it yet). Then I wondered if I’d slipped back in time to April Fool’s Day. Was this a guerrilla-channel style hoax? But no, this is an actual article that actually ran on the WSJ’s web site. Assuming someone isn’t pranking the WSJ (or the WSJ hasn’t gotten bored with covering Wall Street crashes and is pranking us) this is a real thing. And there is, in fact, some history behind it. The US has approached Denmark twice before about purchasing Greenland — in 1867 and again in 1946. Neither offer went anywhere.

Twitter is alight with jokes about this supposed policy. I expect by the time this post goes live, Trump or his acolytes will have denounced it as fake news. But I don’t really care whether it is real or not because this may be the best idea to ever come out of this benighted Administration.

No, seriously. Greenland has enormous strategical significance, forming one part of the “GIUK gap” — the naval chokepoint that we would have used in the Cold War to keep the Soviet Navy out of the Atlantic. It hosts our northernmost military base in Thule Air Force Base and we have gone to great lengths to stymie attempts by China to increase their influence there. Like our previously purchased Arctic wasteland — Alaska — it has abundant natural resources. But despite those resources, Denmark has to spend a few hundred million euros maintaining the population. Hell, you could argue we’d be doing them a favor by taking it off their hands.

Moreover, I think Greenland’s best days are ahead of it. It has been sparsely settled — off and on — for the last millennium. But with global warming melting the glaciers and causing oceans to rise, Greenland may one day be a hot real estate market. A vast island lies underneath that retreating ice, just waiting for hosts of climate refugees looking for somewhere to settle.

Of course, the Danes aren’t stupid. They can read temperature maps as well as I can. So it will come at a steep price. But $325 billion would double Denmark’s GDP while costing us less than 1% of a Green New Deal. Should we not at least make some inquiries? Maybe let Ivanka have tea with Queen Margrethe and, at some point, say, “Look, I know it’s not technically for sale, but … we really do like it. It would make a great set with Alaska.”

And really the Danes should consider the offer. After all, this may be their one and only chance to sell the island to a President who doesn’t understand the Mercator Projection.