Defenders Of The Gold Bikini 2: The Fempire Doesn’t Strike Back 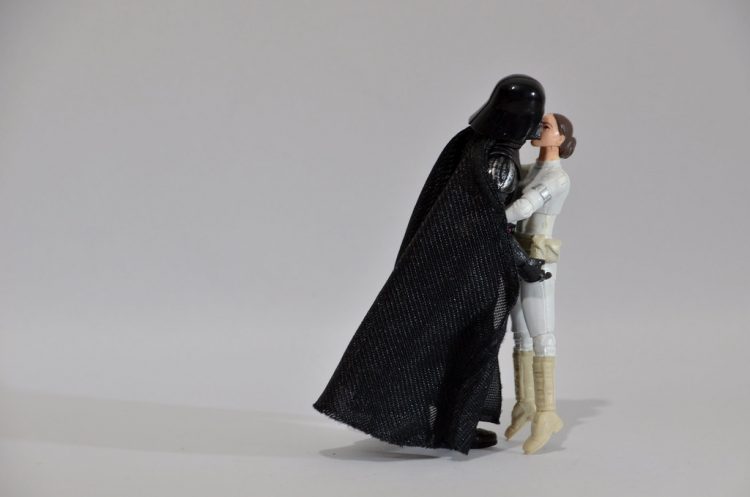 Back in 2016, not long after I published my previous Gold Bikini essay, I stumbled upon an article by a not-yet-infamous Sarah Jeong, who apparently likes Star Wars even more than I do. In it, Jeong discusses Padme’s death, apparently from “a broken heart”.

It reminded me of something that has always felt way more anti-woman than Princess Leia’s gold bikini: Padme swooning and dying ostensibly over a man — under any circumstances — but particularly when she had two beautiful babies to care for.

No one does that.

Up until reading this article, I had always assumed that the Emperor had somehow murdered Padme from afar by draining her life energy, but Jeong makes a good case for this being an impossibility – after all, if the Emperor was strong enough to locate Padme and suck her dry, surely he’d have been able to sense and destroy Luke and Leia in their cradles as well. He could have easily found Yoda on Dagobah and Obi-Wan on Tatooine.  He wouldn’t’ve needed Anakin or a clone army or the assassins he sent after Padme; he could have picked off the Senators and the Jedi one by one with the Force.  Using the rules of the Star Wars universe itself, it simply cannot be true that the Emperor has this ability.  So apparently, as much as it pains me to admit it, it seems that Padme really did die from a broken heart. “Anakin, you’re breaking my heart!” I guess she meant it.

Obviously, another example of poor writing that detracts from the magic that is Star Wars.  But beyond that, it reeks of inherent sexism on a level that puts the gold bikini to shame.  A woman (not just any woman, but a Senator who had faced galactic war, evil robots, and horrible monsters with panache) is so invested in her man that she keels over dead because she is disappointed in him. She would rather die, because, feelz, than live to raise her children, or to use her considerable influence over Anakin to try and stop him. And the means of her demise? Childbirth, naturally. Not even a REAL childbirth-related death, like eclampsia or postpartum hemorrhage or puerperal fever (which takes days to weeks to kick in). 830 women die every DAY from childbirth around the world. It’s a thing that does happen far too often, but Padme dies a made up, gimmicky death caused by scary uteruses going awry as they so often do.  Those things have a hair trigger. Imploding uteruses kill!

There is absolutely NO purpose to Padme’s death. NONE. It’s all female weakness, female fragility. Leia’s gold bikini had a purpose. It had subtext and substance. An enslaved woman rose up and, using the chains of her oppressor and some impressive upper body strength, set herself free. The gold bikini was appropriate to the plot, situation, and genre. Advanced the story. Conveyed a deeper meaning without words. Padme’s death, on the other hand, was pointless and it wasn’t even canon, since Leia claims to remember her real mother – unless this is some kinda pre-birth midichlorien stuff, pfft, who even knows any more. If the Emperor really didn’t kill off Padme to mess with Anakin’s head, her death “in childbirth” makes no damn sense at all.

You know what would have been better? If Anakin had actually created what he feared. He strangled Padme and that thing alone very well could have been enough to kill her. She bravely hung on long enough to push those babies out and then succumbed to her Anakin-induced injuries. We could have dispensed with the prophetic dreams and in that same screen time, given Anakin a legit reason to feel jealous over Obi-Wan instead of that notion suddenly coming out of left field as it does in Revenge of the Sith. If his own jealousy and his own fear of losing Padme – because after all, a person can have that fear without having midichlorien-fueled nightmares, especially if that person had a terrible childhood and had already lost his mother – actually caused him to snap and Force-choke Padme in a fit of rage. JMO, but accidental murder is a hell of a lot more compelling a reason to turn to the Dark Side then “I’m scared my baby-momma may die at the hands of her vicious uterus; corrupt me O Emperor.”

Yeah, it makes Anakin unlikeable. But so does killing Jedi younglings. So does his constant brooding and whining and indiscriminate genocide of Sand People. He’s not supposed to be likeable anyway, he’s supposed to be Darth-fricking-Vader. Nothing about Anakin is likeable. Why draw the line at spousal abuse?

The unfortunate thing about being a woman – one of them – is that at least 1/3 of the time, if you die at the hands of someone else, it’s your male partner. At least 1/3. This is actually an improvement from historic levels of violence against women – which, we probably don’t even want to know. Domestic abuse is endemic to humanity, unfortunately, and probably always will be, even if we someday live in a galaxy far, far away. It’s not gratuitous to have Anakin kill Padme. It’s honest. If she had to go, at her partner’s hands is a far more realistic way to go than by an errant blaster shot or a runaway droid, and far, far more realistic than fatal swooning.

Padme dying either for legitimate medical reasons, or killed at the hands of her partner would have been vastly superior to a terminal case of female fragility and uterine implosion. Padme’s death is sexist and gross and offensive and wrong. It reduces Padme – brave, heroic Padme, the Senator who was once a Queen – into a quivering disaster and frankly a terrible mother.

My question is, given all that, why is everybody so hung up on the gold bikini? Is it because it’s low-hanging fruit? (Yes, that’s a joke.  Carrie and I got it.)

Being a woman is, at times, kind of a poopy gig. Women have suffered a lot, and a lot of women still suffer fates far worse than a Sarlacc pit. There are women who would give their eyeteeth to have the ridiculous privilege of coming to the year 1982 and being paid to wearing a silly, sexy costume in a movie.

We have our priorities so far screwed up as feminists, it’s like we don’t even know which way is up any more. Too many people want to wear the mantle of feminism, without doing any of the work. So they single out cultural details that are petty and trivial and inconsequential and shriek about them online while OTHER WOMEN ARE DYING. For reals, dying. They get kidnapped by Boko Haram and gang-raped on buses and have acid thrown in their faces and are killed by their fathers and brothers for going online or refusing to marry someone. They die in childbirth or from disease or starvation or from domestic abuse. In real life, those women don’t get to swoon and die from a broken heart because they’re sad over a cute boy. They have to endure what they can endure, things that you and I would consider unendurable, and then they die, after a life so unbelievably difficult that we all should have broken hearts.

I don’t claim to know how to solve those things. But I know how NOT to solve them, and berating a middle-aged actress over a sexy outfit she was paid to wear 35 years ago is not the way. Worse, it’s annoying good people who would otherwise be feminist allies to such an extent that they no longer want to hear about feminism and tune out. Feminism has become a dirty word and it’s largely because of outrage porners who’d rather bitch about the slightly imperfect execution of the enormous privileges that modern American women are so very, very fortunate to enjoy, rather than address real, actual issues facing real, actual women.

Men will always and forever like looking at women in skimpy clothing. And people are good at making money off of these proclivities. Those things are not going to change and they are not patriarchy or repression so long as it’s consensual and the women involved are adequately compensated.

I get it, fighting the hard fight is…hard. I don’t do it, either. But for the love of gold bikinis, don’t con yourself into thinking you’re doing something of substance, when you’re engaged in a convo over a goddamn movie costume.