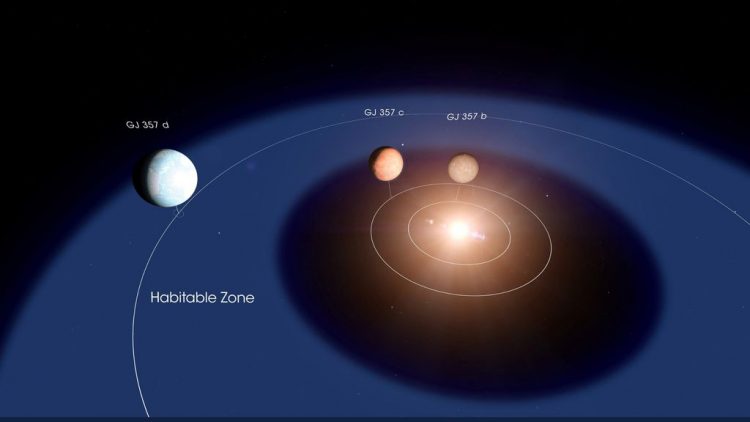 GJ 357, a nearby star with 3 plants, including one super-Earth in the habitable zone. Credit: NASA

[ThTh1] Global warming is not a uniform process. There are years when it progresses slowly or even regresses. And there are years where it progresses rapidly. We’re currently in a cycle of very rapid advancement. Last week, the Greenland ice sheet shed a record-shattering 12.5 billion tons of ice in a single day. We are also on pace to break the 2012 record for the minimum in Arctic Sea Ice. You may remember that one because when it recovered very slightly in 2013, a bunch of climate skeptics proclaimed that we were setting record levels of arctic sea ice (we weren’t).

I’m not one of the “we have 12 years to save the planet” doomsayers. But it does feel like we are approaching an inflection point. We will survive; but our options for how we will survive are narrowing rapidly.

[ThTh2] Do you want to know what TV signals are currently being received by the nearest exoplanets? Twitter’s got you covered.

[ThTh3] Speaking of exoplanets, we’re getting cloer and closer to discovering Earth analogues.

This arrow by mathematician and sculptor Kokichi Sugihara can't point left. Here's how it works: It's 3D-printed with a bunch of curves our brains don't register. pic.twitter.com/Xa32GrI7ii

[ThTh5] Telomeres are little piece of DNA on the ends of your chromosomes that protect your DNA from disruption, kind of like the aglets on the ends of shoelaces. Shorter telomeres indicate greater cellular age. One way to keep you telomeres short and your cellular age young? Sex. At least for women. Although, I suspect it’s not the sex itself that’s keeping the telomeres short, but the lifestyle that is more conducive to having time for sex.

[ThTh6] There is a growing body of evidence that autism is genetic.

[ThTh7] I have not observed at these facilities but used to spend a lot of time in Chile at observatories. [H/T: Andrew]

[ThTh8] A film noir version of the video of comet 67/P Churyumov-Gerasimenko.

[ThTh10] We live in a warped and twisted galaxy.

Thing I will never get over: just how thin Saturn’s rings are.