Tulsi Gabbard is What Donald Trump Could Have Been 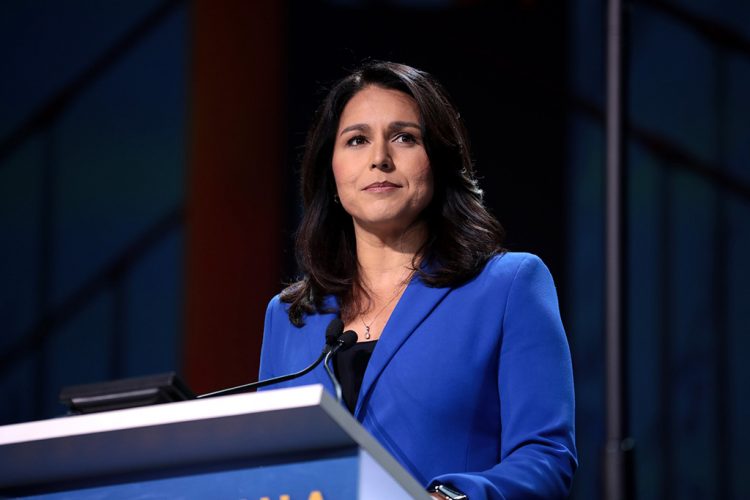 Regardless of what one might think of Donald Trump or his most ardent supporters, many people voted for him in 2016 not just as a rejection of Barack Obama and Hillary Clinton but as a protest against the entire political system. Prior to 2016, a Clinton or a Bush had been a major candidate in 8 of the last 9 presidential elections, and “no more Bushes, no more Clintons!” was an often-seen refrain. Voters from both parties were unsatisfied with the choices they faced.

Trump was the perfect candidate for the perfect time. If you’re looking for an outsider, you can’t get more outsider-y than someone who wasn’t even a politician. Trump had promised to be the voice for those who had been neglected, to get us out of interminable wars that the establishment from both parties had gotten us into (recall Maureen Dowd’s column “Donald the Dove, Clinton the Hawk”), to make America great again. He was rude and nasty and vulgar, but that was what Republican voters were looking for, someone who wasn’t PC who would fight! He was a crook who donated to Democrats, but that was just someone working a corrupt system. He was someone who might have assaulted women sexually, but those women were all lying anyway, and what about Bill Clinton? Many people didn’t buy it, but enough did, in the right states, and Trump was elected.

And yet, those who elected Trump hoping that he would change things have to be disappointed. We are still in Afghanistan. Mining and manufacturing jobs aren’t coming back. The economy is chugging along but not exactly booming. The sophisticated corruption that the Clintons exemplified is gone, only to be replaced by petty corruption more fit for third-world banana republics.

And what has changed has been for the worse. For the most part, Trump has governed as a cartoon version of an evil Republican. His foreign policy seems to be to do the opposite of whatever Obama had been doing rather than based on anything coherent. Trump didn’t start this trend but the total war attitude against all enemies in politics is consuming both parties and he is the worst example. His election has emboldened the far right. The worst aspect of his administration are the people who work for him. His inability to take any criticism about anything considerably narrows the field of people who would work in his administration, to the point where it’s a relief when he appoints someone halfway competent to a position.

The Democratic primary is about who would be best to replace Trump. If you want to go back to the way things were in 2015, then by all means go with Joe Biden. But if you thought there was something deeply wrong with politics back then and want someone who would make the changes Trump promised but hadn’t, then I can’t think of anyone better than Tulsi Gabbard.

Gabbard served in the National Guard in Iraq from 2004-09 and is currently a member of the House representing Hawaii’s 2nd district. Her critics dismiss her as a Russian stooge and an apologist for Syrian dictator Bashar al-Assad, but her record shows she has been a consistent critic of the projection of military force by the U.S. and the deployment of troops to foreign theaters, and a supporter of de-escalation of conflicts around the world. She opposed U.S. involvement in Syria but contrary to her critics she has criticized Assad as a “brutal dictator” and has said that there is “no disputing the fact that [Assad] has used chemical weapons and other weapons against his people.” She opposed an arms deal with Saudi Arabia and U.S. support of the Saudi-led involvement in Yemen. She voted in favor of Obama’s deal with Iran and opposed Trump’s decision to withdraw from the deal. Gabbard has said that she would withdraw from Afghanistan, and while other candidates have made the same promise, with Gabbard there is a record that backs up those words. Gabbard also has a record of supporting veterans and has pushed for and introduced legislation that improves their lives. With Gabbard as president we can expect a foreign policy based on principled skepticism of American military intervention and one that looks out for the interests of those who serve.

It is true that Russian media online has taken a liking to Gabbard, but there is no evidence that the feeling is mutual or that there has been any contact between Gabbard and Russia. It’s likely that Russia favors Gabbard because of her position on Syria. But just because Russia takes one side of issue doesn’t mean the U.S. should take the opposing side, and it is that didactic thinking that leads to unnecessary conflict.

Gabbard has proven she is willing to be unconventional and disagree with her party in areas other than foreign policy. Trump managed to turn his vulgarity from a liability to an asset, riding the wave of opposition to political correctness and identity politics. Of course, Trump has taken it entirely too far, and some of the opposition to identity politics was in fact merely identity politics for white people, with deadly results. Gabbard has a record of standing up to political correctness, without the extremes that Trump takes it to. Gabbard was the first Samoan American and Hindu to serve in Congress, but does not trumpet her identity. She has talked about identity politics as “being used to kind of tear people apart for political interests, rather than remembering and recognizing what unites us.” She criticized Obama for refusing to use the phrase “radical Islamic terrorism”. She is a supporter of free speech and has attacked tech companies for banning views they disagree with.

Trump was supposed to be an advocate for the working class but has done little for them. Here, again, Gabbard could deliver what Trump hadn’t. Gabbard is one of the few members of Congress who do not take donations from corporations. She supports raising the minimum wage to $15 an hour. She has proposed making community college free for all Americans and four-year colleges free for those under a certain income threshold. She supports universal health care and has co-sponsored a bill that would create a government-run health care system.

And then there’s the debates, which showed she is not just a fringe candidate but deserves to continue to be on the stage with the other major players. She destroyed Kamala Harris when attacking her record as prosecutor. Arguably she has had the best and most consistent performance through the two debates. After both debates she was the most searched candidate on Google. While you can say this is partly because she’s mostly unknown, it is clear that when people see her speak they want to hear more. If given the platform that some other candidates have been given she could easily rise to the non-Biden top tier, because she presents a vision that is simply not shared by any of the other candidates.

Many candidates promise change, but Tulsi Gabbard would represent real change to our political landscape.