Possibilities For the Future 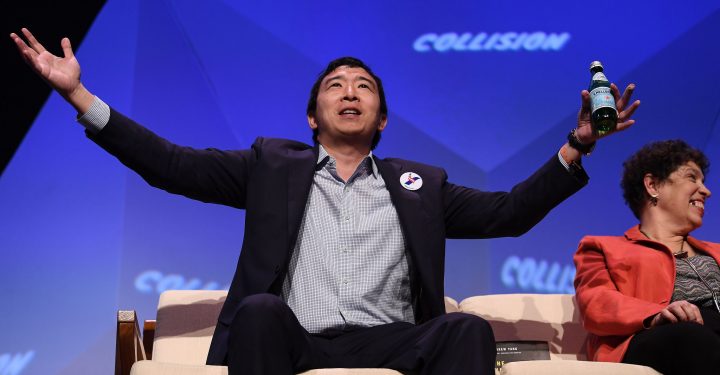 At first, I thought he was a joke. UBI was his game, and UBI is something that I don’t take seriously. A thousand dollars a month. What a gas. But, as I heard more of him, and I looked at his policy proposal for the UBI, I started to realize that he was the only Libertarian friendly candidate on the left. Indeed, the only one that I might choose, let alone choose over Trump. And truly, there are aspects of his Freedom Dividend that warm this Libertarians heart:

What about variations in the cost of living? Wouldn’t major cities need much more money than rural areas?

$1,000 a month goes farther in some places than others.

Why would you give the Freedom Dividend to the rich?

A wealthy person will likely pay more into the system than he or she gets out of it.

An understanding of the actual underpinnings of economics is quite remarkable in this day and party. And this is carried along in his other policies that involve public money. From increasing teacher salaries to student loan help, these are not usually things that motivate the Libertarian population. But, in every case, he is looking at the economic drag that is being caused by our current situation. Higher pay for teachers who have proven track records, lowering the number of government bureaucrats are among the best of these ideas, but they are hardly alone. Combine these with workable immigration policies, which none of the other candidates on either side of the political aisle have, and we have a visionary of realist proportions.

Relocating federal agencies, legalizing Marijuana, required cameras for cops, automatic law sunsetting, the list of freedom and liberty expanding ideas goes on. To be sure, there are a few to make you remember he is running as a Democrat; lowering the voting age to 16, automatic voter registration, reducing packaging waste, free marriage counseling. Also, some real stinkers that probably aren’t constitutional at this point. But dreaming big often takes spitballing and some false starts. And big dreams might be what we need right now.

Yang seems to be the only candidate who is looking to the future and the gigantic changes that we appear to be on the verge of. Will these be the changes necessary? The right time for them? We don’t know. But I do know that no one else is really talking about the overwhelming level of tech and data that is coming our way. Every other candidate on the left has fallen back on a failed economic system, socialism, that has been shown time and again to destroy human capital. Or, on the other hand, raw capitalism. Which, while it might have the greatest potential for wealth generation, will not fit in our current politics. And at the end of the day, you have to meet people where they are.

Alone among the candidates of the left, Yang not only wants to meet you where you are, but he also wants to help you and society to move into the future.